MemTest86 has been around for many years, and it is the standard in Memory Testing for many computer enthusiasts. The program boots from CD-ROM or floppy using its own DOS-like operating system, and tests memory at its most basic level. To many enthusiasts, this program is the ultimate test to determine the stability of memory. If you wonder why we would use such an ancient benchmark, it is because we have not found anything that is really better to test memory performance and stability. Apparently, we are not alone, since MemTest86 is still widely used in the Memory industry to test the stability of memory modules.

While we don’t know exactly where it started, we have seen a number of enthusiast sites using a variation of the Sandra Memory, which turns off buffering techniques and comes closer to measuring raw memory performance. Macci was one of the first to use the UNBuffered benchmark – the famous Finn who is always at or near the top of the 3DMark scores. In addition, Tony Leach in England and I have used it in many reviews on other web sites.

The idea of the UNBuffered Memory Benchmark is very simple – you merely turn off all memory buffering techniques. Sandra makes this very easy to do. Select ‘Memory Benchmark’, right-click ‘Module Options’, and uncheck the 9 boxes that have to do with buffering.

The UNBuffered Memory Benchmarks are quite different from what you may be accustomed to seeing. As an example, these are Buffered or Standard Memory benchmarks with two double-sided DIMMs on a 875 Canterwood board at stock 3.0GHz at DDR400 at memory timings of 2-5-2-2. 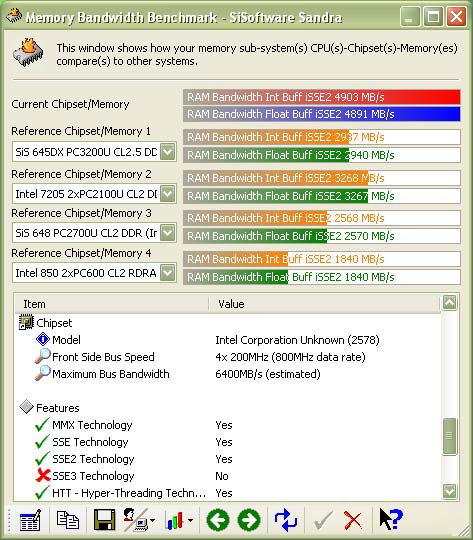 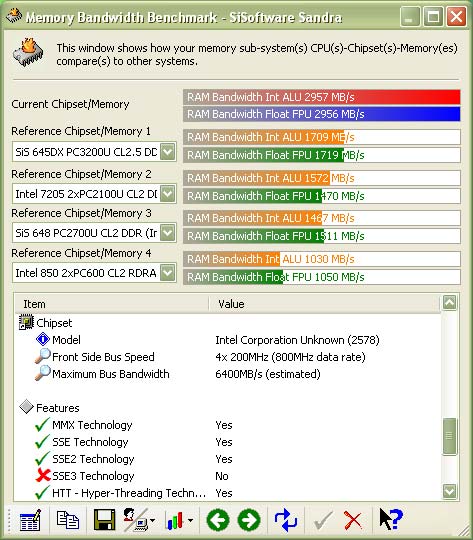 Please look carefully at the screen captures above, and notice that THE MEMORY BAR STATES “BUFF” IN THE DESRIPTION ON A STANDARD TEST. “BUFF” IS NOT USED IN THE DESCRIPTION IN THE UNBUFFERED MEMORY TEST

While the score of the UNBuffered benchmark is much lower than the standard Memory Test, the UNBuffered benchmarks are very comparable to MemTest86 results. This excellent correlation of MemTest86 and SiSoft Sandra UNBuffered Memory Test results seems to be true in most situations. Benchmarks are only useful in the end in how they can compare different configurations and hardware. We have found standard Dual-Channel DDR400 Performance on Intel 875/865 chipset motherboards, as you see above, in the 2300 to 3000 MB/sec range as measured with the Sandra UNBuffered Memory Benchmark. MemTest86 gives similar results.