At the moment, there is only a small handful of motherboard makers that are in the mobile system market segment: ECS, Asus, and FIC. Gigabyte doesn’t actually manufacturer its own notebooks. Instead, Gigabyte has partnered with FIC to produce the G-MAX NB-1401, which is why it may look similar to a previous FIC notebook that we looked at in our Centrino based notebook roundup. We are excited to actually see one of these notebooks on the market because we really enjoyed the design. 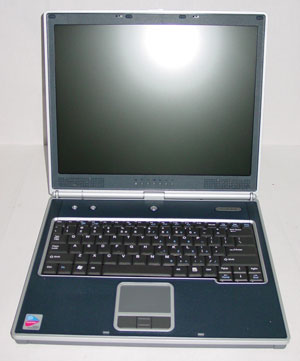 
We will reiterate once again that this notebook looks and feels a lot an Apple PowerBook. Its smooth, sleek, and elegant design inherently accentuate the beauty of the notebook. The dark colors are revealed when the unit is opened, which help the user focus on the 14.1" TFT LCD. While we would have liked to have seen a maximum resolution higher than 1024x768 (XGA), the screen on the G-MAX NB-1401 is made by Auo (supposedly of grade A selection), which we did find to be rather top notch. It is, actually, one of the brighter screens that we have seen in a while.

The speakers on the notebook are ultra low profile and are directly beneath the LCD panel. It has been a while since our last look, but we were again surprised how thin the LCD panel is. This just increased our amazement for the placement of the speakers because it is actually a great place to situate them. Looking dead on toward the screen, sound is pumped toward the user, and hands [as well as anything else in normal use] don’t interfere with the sound experience.

The keyboard on the G-MAX NB-1401 is similar to many others notebooks that have Taiwan origins: full-sized, dedicated arrow keys, good key travel, and a reasonable tactile feel (still less than what we have seen on Dell and IBM notebooks). As per our past experience, nothing has really changed. The control key is still in the proper place (far left key), and the keyboard has a Windows key.


We should note that there seems to be some space (between the top of the keyboard and the buttons: power, default internet browser, and default mail application) of which the G-MAX NB-1401 can take advantage possibly to increase the width of the keyboard. However, this empty space helps convey a sense of less clutter and increased simplicity in the design.


The touchpad is directly below the keyboard, and is fairly standard in size. Though compared to some of the Dell, HP, and IBM notebooks that we have seen, the touchpad can be considered a tad larger, but the degree of which is negligible. The buttons have a good tactile feel, but the scroll rocker could use a bit of work. The depth of the “rocking” is minimal, and a better tactile feel could be achieved if the depth of the click was deeper.


There are two sets of LEDs for the G-MAX NB-1401. One is directly below the LCD panel and the other, between the two speakers. From the left to right, the LEDs indicate power state, battery status, hard drive activity, wireless status, caps lock, scroll lock, and number lock.

There is another set of LEDs on the back of the LCD panel at the hinge. These indicate power state and wireless connection status (if the wireless receiver is on or off). 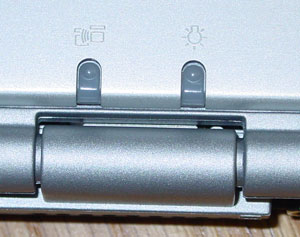