While the biggest part of today’s Radeon RX 5600 series launch is the retail desktop for obvious reasons, this is not the only market AMD will be addressing. The company believes they have a winning part in the works, and to that end they are going to extend the Radeon RX 5600 series over the entire market, covering OEM desktop and mobile as well. 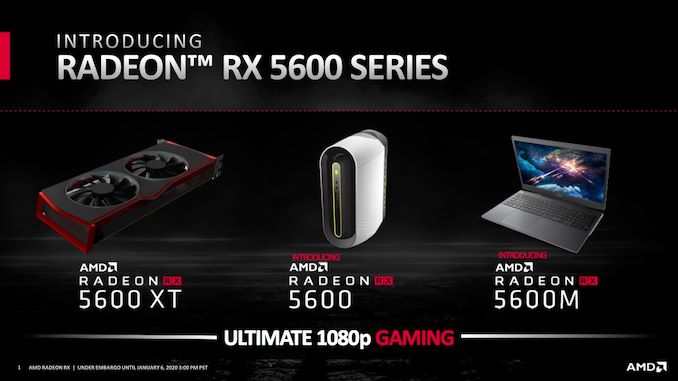 Starting things off for the OEM desktop side, AMD will also be releasing the Radeon RX 5600 for that market. Similar to what we saw with the OEM-only Radeon RX 5500, the Radeon RX 5600 is a similar, but slightly slower part. The big difference here is that while clockspeeds and TBPs remain unchanged, these OEM parts will only ship with 32 CUs enabled instead of 36 CUs enabled.

On paper, this gives the Radeon RX 5600 somewhere around 90% of the retail Radeon RX 5600 XT’s performance. The precise performance gap will vary with games and whether they’re compute/shader bound or pixel/bandwidth bound, but again, it’s a ballpark figure.

Meanwhile in the mobile space, the 5600 series will be rounded out by the Radeon RX 5600M. Unlike the OEM desktop card, AMD isn’t holding back any punches here, and the 5600M will ship with the same 36 CUs as the retail card.

But, like AMDs other Navi mobile parts, the clockspeeds and TDPs are up to the OEMs. So OEMs will be free to dial them up and down (to a degree) to hit the specific performance/power consumption they’re looking for in a laptop. Consequently, AMD doesn’t have a maximum TBP here, but they have set a minimum: 60 Watts. Radeon RX 5600M will not be a light chip.

It won’t be a small chip either, which is what makes this announcement particularly interesting. Since this is all based on Navi 10, any OEM using the RX 5600M will have to accommodate the moderately sized chip and its accompanying 6 GDDR6 chips. This shouldn’t be a challenge for OEMs, who already regularly include NVIDIA’s even larger chips, but to date AMD’s laptop wins have almost exclusively been their mobile-focused GPUs like Polaris 11 and Navi 14, which are available in low z-height packages. So the RX 5600M will require a greater commitment from laptop partners than what we’ve seen in the past, both with respect to power/cooling as well as sheer board space.

The OEM Radeon RX 5600 and the Radeon RX 5600M should be available soon. And with CES in full swing, there shouldn’t be any shortage of partners announcing systems with the new video cards over the next couple of days.