Before the launch of their 30” Cinema Display, Apple went to ATI and NVIDIA with the requirements of the new display to get an idea of what graphics cards would support it.  Apple ended up launching the new displays (along with the new 2.5GHz Power Mac) with NVIDIA’s GeForce 6800 Ultra DDL, even though ATI was ready to go with the X800 XT Mac Edition.  All of Apple’s new Cinema Displays are DVI only, so in order to understand the reason Apple chose NVIDIA’s GeForce 6800 Ultra DDL over ATI’s Radeon X800 XT Mac Edition you have to know a little bit about the DVI specification.

The DVI spec transmits data using the transition minimized differential signaling (TMDS) protocol.  The DVI spec calls for each DVI output to have at least one TMDS “link” consisting of three data channels (RGB) and one control channel.  The maximum speed at which a single 10-bit TMDS link may operate at is 165MHz, offering 1.65Gbps of bandwidth.  In real world terms, this means a single 10-bit TMDS link can drive a display at up to 1920 x 1200 (the actual maximum resolution can vary depending on the panel).  For most displays that’s not a problem, but Apple’s 30” Cinema Display has a native resolution of 2560 x 1600, which exceeds the bandwidth a single TMDS link can deliver.  So what do you do?  Remember that the DVI spec calls for at least one TMDS link, but each DVI port can support up to two TMDS links, doubling the maximum bandwidth and thus enabling support for Apple’s 30” display.

The GeForce 6800 Ultra DDL uses two external dual-link TMDS transmitters manufactured by Silicon Image – the 178CT64.  The two transmitters are located on the back of the card and drive the two dual-link DVI outputs, enabling any possible display configuration with the NVIDIA card. 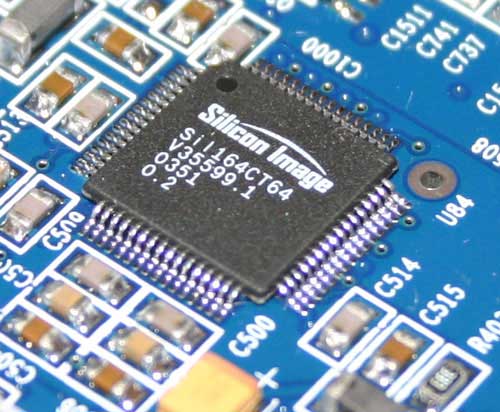 The new Radeon X800 XT Mac Edition still has the same internal single-link TMDS transmitter as the Radeon 9800 Pro Mac SE, but now features a 24-bit internal VDO port.  The internal port can connect to two external TMDS links to provide a dual-link DVI output.  ATI actually uses the same Silicon Image TMDS transmitter as NVIDIA, the 178CT64, and interfaces to it using their internal 24-bit VDO port.  The internal TMDS is only single link so the X800 XT Mac Edition uses that to drive its ADC port, while the external dual-link TMDS drives the dual-link DVI port.  ATI’s inability to drive two 30” Cinema Displays is what gave NVIDIA the design win with the 2.5GHz G5 system, but ATI insists that very few users will have two 30” displays and thus the flexibility of one ADC and one dual-link DVI connector is more than enough for the majority of the market. 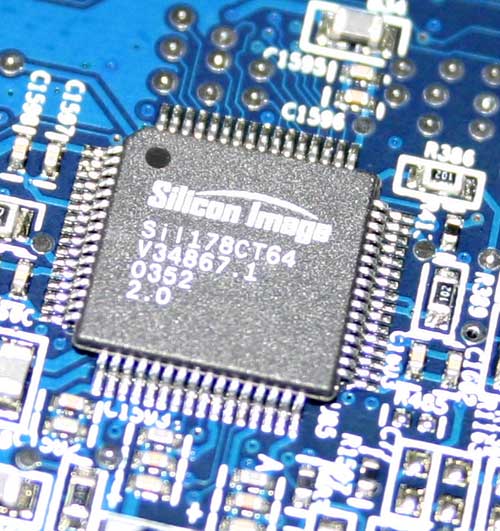 So immediately off the bat, if you want to run two 30” Cinema Displays, then your only option continues to be the GeForce 6800 Ultra DDL.  Otherwise, the X800 XT Mac Edition is still in the running.