The Mac mini as a Media Computer

The Mac mini as a Video Editor

In our review of the Mac mini, we mentioned that we would take a closer look at iMovie HD in a later article, and although iMovie isn't totally related to using the mini as a HTPC, this is the best place that we could find to put our iMovie HD thoughts. 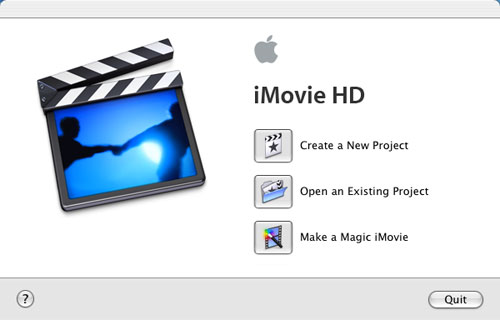 For the most part, "user friendly" video editing software is pretty horrible. The interfaces are overly simplified to the point that it's hard to actually get any good editing work done. I'll touch on the performance aspects of them shortly, but needless to say, I'm not a fan of cheap, entry-level, video editing packages.

Being a part of iLife '05, which is priced at $79, meant that iMovie HD would inevitably fall into the category of a "cheap" video editing package, but as you can expect, the interface doesn't suffer the fate of other similarly-priced applications. 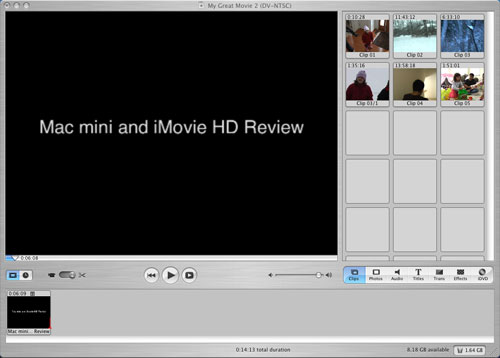 The interface is relatively simple, content is on the right side of the window, your preview window is on the left, and underneath, you have your timeline. In terms of the organization of the interface, everything is where you'd expect it to be from a non-linear editing (NLE) program.

What I found most interesting was that despite the relative simplicity of the interface, iMovie HD just didn't seem like an OS X program developed by Apple. I look at things like Mail, TextEdit or even Pages, and they all have a certain feel to them and flexibility in their UI that makes them distinctly Apple. I did not get that same feeling from iMovie HD. And although most were, not all features were totally intuitive on how to implement them, which is a bit disappointing from a UI standpoint. Given that many AnandTech readers have been using iMovie for much longer, I'm curious as to how Mac users in general view the iMovie UI, not from the perspective of NLE applications, but compared to all of Apple's applications. It's tough to pinpoint exactly what about iMovie HD that makes it feel so different than the majority of iLife or other OS X applications, but to me, it just did. Part of it may be that while OS X itself as an OS seems so much of an improvement, interface-wise, over anything else out there, you tend to expect similarly impressive UIs from all of its applications (at least those that are developed by Apple). While you can argue that elements of iPhoto 05's UI are similarly perfect, it's tough to do the same about iMovie HD (or even Pages).

With that out of the way, let's talk a bit about how iMovie HD works. As its name implies, iMovie HD has the ability to import and edit, natively, content from HD DV cameras. Unfortunately, we didn't have any HD cameras on hand to test its HD functionality, but feature-wise, it should be similar to what we've experienced with editing standard definition video content.

The most important feature of iMovie HD is native support for a number of storage formats: DV, 16:9 DV, HD, MPEG-4 and iSight. The beauty of native support for these formats is that there's no transcoding when importing video from a camera that stores content in one of the supported formats - it all happens in real time. For example, for our tests, we used a Panasonic GS-120 miniDV camcorder, which stores all of its content in a standard DV format. To import from our miniDV camcorder into iMovie HD, we simply connected the camcorder to the Mac mini by way of a 4-pin to 6-pin FireWire cable, and the mini had no problem detecting the camcorder. We couldn't use the camcorder's "PC Transfer mode", but leaving it in playback mode worked just fine. Just about any camcorder with a FireWire port should work, although Apple does provide a list of supported devices on their website. 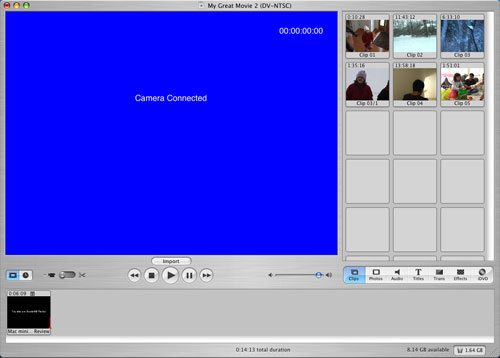 iMovie HD took care of the rest. It rewound the miniDV tape that was in the camcorder and started to play it from the start of the tape - immediately transferring the contents to the mini. Since there's no transcoding involved, the transfer wasn't very CPU intensive and it happened in real time, meaning that for every 1 minute of video, it takes 1 minute to import it. 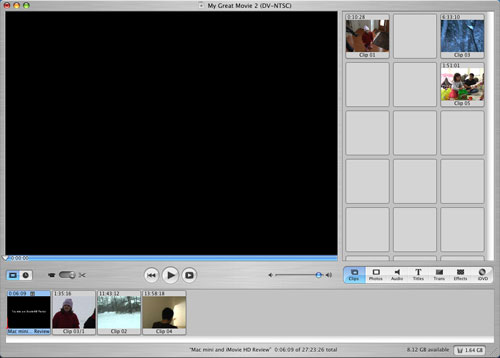 The application also attempts to separate clips for you automatically by importing each period of recorded video between stops as a separate clip and dumping them into your clips library. The idea behind this is that everytime you stop recording on the camcorder, you are done with that particular scene and you'd like it to be treated as a separate clip. For most types of editing, this assumption works quite well. There is even an option that will automatically take all of the clips on your camcorder, insert transitions between them, and put a title screen at the beginning of the whole thing, if you don't wish to do any sort of editing. 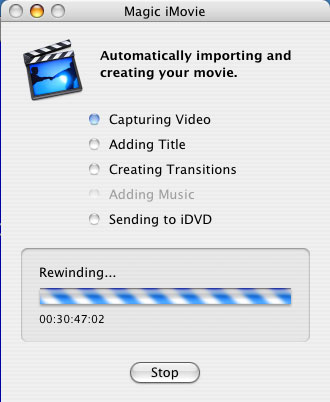 You can also import other types of video, provided that you have the appropriate codecs on your computer. As I alluded to in the Mac mini review, importing non-native video does take a good amount of time, but it is possible. 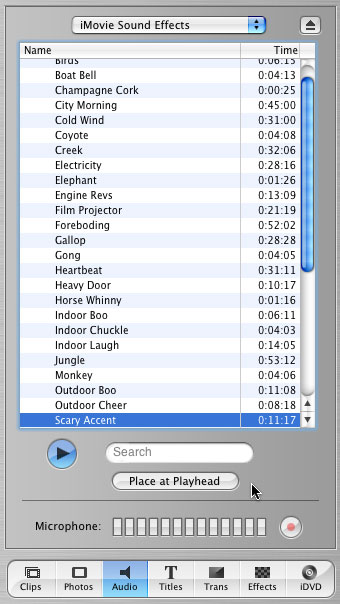 The rest of the features of iMovie HD are pretty standard for any NLE application. There is a surprisingly complete list of sound effects that comes with iMovie HD, and obviously, the iTunes integrated aspects let you import your iTunes songs as soundtracks for your movie. One complaint about the performance of the Mac mini is that extracting audio from an imported video clip takes a good amount of time (splitting the video and audio tracks up so they can be manipulated individually).

You can apply a number of effects to video clips, although it's nothing that will be putting ILM out of business anytime soon. Applying effects is definitely CPU bound on the G4. If there's one area where you'd see a big difference between the 1.42GHz and the 1.25GHz models, it's in iMovie video effects. Thankfully, the application doesn't lock up when you're applying an effect to a long movie clip (which you won't usually do anyways) and you can actually multitask fairly well, even with the operation eating up close to 100% of your CPU. Note that this is on the 1.25GHz mini, so if you have a faster version or if you happen to be running on a dual G5, the experience should be even better. 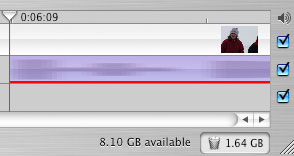 The editing power of iMovie HD is pretty decent, especially for a low cost application. You can perform all of the basic types of edits; cutting and pasting is equally easy, although for first time users, getting used to how to select portions of your clips to copy/cut/paste can be a bit foreign. iMovie also features its own trash bin, separate from OS X's trash, so that anything you delete can be emptied/recovered separately from your system-wide trash. I wasn't totally impressed with iMovie's handling of titling effects, as they often times reduced the image quality of the scene to which they were applied (depending on the title effect used). The application of titles to movie scenes was also not the most intuitive.

Quite possibly the most impressive part of the whole iMovie HD experience is the responsiveness of the application. Regardless of what you're doing, the application remains just as responsive as if you were doing nothing. It boils down to the thread management of the OS and application, as well as how iMovie handles the UI when other things are going on. For example, if you're applying an effect to a portion of a clip and decide that you want to preview another clip, it will momentarily pause the effect rendering while you perform other tasks. Armed with 512MB of memory, the performance of iMovie HD on the Mac mini was more than acceptable, surprisingly enough, even while actually editing and multitasking.


Furthering its tight integration with the rest of the iLife suite, iMovie HD also makes it easy to export your finished movie to iDVD for full DVD authoring. All in all, I was pretty impressed with the performance of iMovie HD on the Mac mini. Not bad for a $499 computer - it didn't feel slow at all. 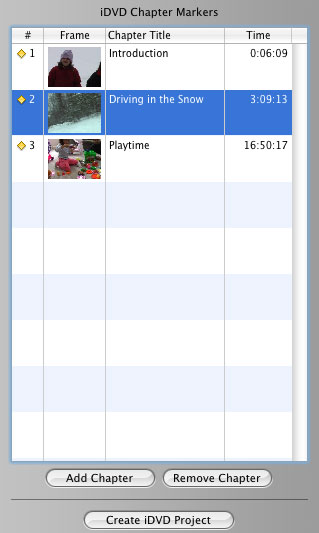 But now on to some more HTPC oriented topics...