A Bit More On Graphics Core Next 1.1

With the launch of Hawaii, AMD is finally opening up a bit more on what Graphics Core Next 1.1 entails. No, they still aren’t giving us an official name – most references to GCN 1.1 are noting that 290X (Hawaii) and 260X (Bonaire) are part of the same IP pool – but now that AMD is in a position where they have their new flagship out they’re at least willing to discuss the official feature set.

So what does it mean to be Graphics Core Next 1.1? As it turns out, the leaked “AMD Sea Islands Instruction Set Architecture” from February appears to be spot on. Naming issues with Sea Islands aside, everything AMD has discussed as being new architecture features in Hawaii (and therefore also in Bonaire) previously showed up in that document.

As such the bulk of the changes that come with GCN 1.1 are compute oriented, and clearly are intended to play into AMD’s plans for HSA by adding features that are especially useful for the style of heterogeneous computing AMD is shooting for. 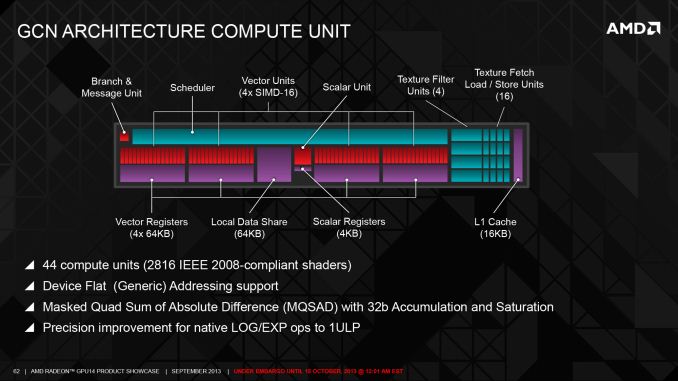 The biggest change here is support for flat (generic) addressing support, which will be critical to enabling effective use of pointers within a heterogeneous compute context. Coupled with that is a subtle change to how the ACEs (compute queues) work, allowing GPUs to have more ACEs and more queues in each ACE, versus the hard limit of 2 we’ve seen in Southern Islands. The number of ACEs is not fixed – Hawaii has 8 while Bonaire only has 2 – but it means it can be scaled up for higher-end GPUs, console APUs, etc. Finally GCN 1.1 also introduces some new instructions, including a Masked Quad Sum of Absolute Differences (MQSAD) and some FP64 floor/ceiling/truncation vector functions.

Along with these architectural changes, there are a couple of other hardware features that at this time we feel are best lumped under the GCN 1.1 banner when talking about PC GPUs, as GCN 1.1 parts were the first parts to introduce this features and every GCN 1.1 part (at least thus) far has that feature. AMD’s TrueAudio would be a prime example of this, as both Hawaii and Bonaire have integrated TrueAudio hardware, with AMD setting clear expectations that we should also see TrueAudio on future GPUs and future APUs.

AMD’s Crossfire XDMA engine is another feature that is best lumped under the GCN 1.1 banner. We’ll get to the full details of its operation in a bit, but the important part is that it’s a hardware level change (specifically an addition to their display controller functionality) that’s once again present in Hawaii and Bonaire, although only Hawaii is making full use of it at this time. 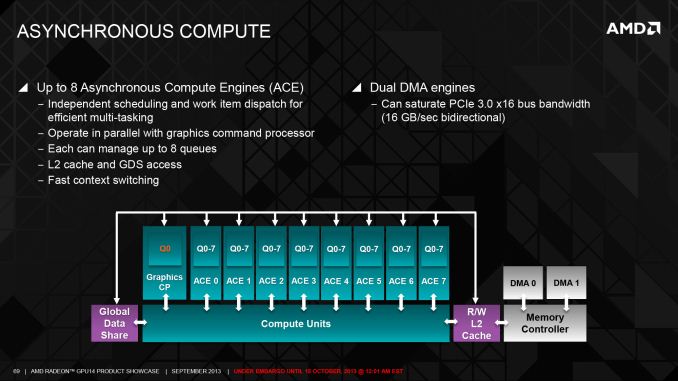 Finally we’d also roll AMD’s power management changes into the general GCN 1.1 family, again for the basic reasons listed above. AMD’s new Serial VID interface (SIV2), necessary for the large number of power states Hawaii and Bonaire support and the fast switching between them, is something that only shows up starting with GCN 1.1. AMD has implemented power management a bit differently in each product from an end user perspective – Bonaire parts have the states but lack the fine grained throttling controls that Hawaii introduces – but the underlying hardware is identical.

With that in mind, that’s a short but essential summary of what’s new with GCN 1.1. As we noted way back when Bonaire launched as the 7790, the underlying architecture isn’t going through any massive changes, and as such the differences are of primarily of interest to programmers more than end users. But they are distinct differences that will play an important role as AMD gears up to launch HSA next year. Consequently what limited fracturing there is between GCN 1.0 and GCN 1.1 is primarily due to the ancillary features, which unlike the core architectural changes are going to be of importance to end users. The addition of XDMA, TrueAudio, and improved power management (SIV2) are all small features on their own, but they are features that make GCN 1.1 a more capable, more reliable, and more feature-filled design than GCN 1.0.