For aesthetic purposes, Fractal Design enriched the black interior of the Node 804 with white accents. The blades of the cooling fans, the five expansion slot covers, and the HDD drive cages are glossy white, creating a striking but clean contrast with the rest of the case. 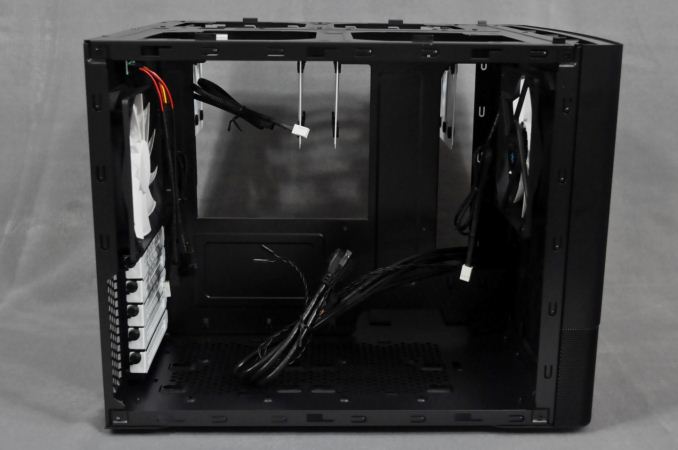 The right compartment of the Node 804 is clean and straightforward, with a slot for the PSU at the lower right corner and two cages for up to eight 3.5" drives. The two white drive cages at the top of the cage are removable and can hold up to four 3.5" drives each. Decoupling rubber rings are used at every screw hole to minimize noisy vibrations. 2.5" devices cannot be installed on those two drive cages (without an adapter), limiting the SSD installation options to either the faceplate or the bottom of the left compartment. We should note that 3.5" drives are installed vertically, which makes cable management a little bit difficult, especially with the right cage that brings the drives very close to the PSU.

Vents, vents and more vents. No matter where you look, almost 85% of the whole chassis' exterior surfaces are vents. There are three 120mm fans in the Node 804, with slots for several more if necessary. Fractal Design also boasts that the Node 804 can hold up to four liquid cooling radiators simultaneously; what kind of systems exactly they assumed that would be installed in this case, we cannot imagine. There is a catch though – there are limitations on what radiators can fit and something needs to be sacrificed for each one of them.

For example, 280mm radiators can only fit at the top of the right chamber, but that requires the removal of the HDD cages. If that happens, only one HDD cage can be relocated to the bottom of the compartment and secured using the straps that normally are for cable management. At the top of the left compartment, only 240mm radiators will fit and they will also limit the height of memory modules to 48mm (and removing/installing RAM will require the removal of the radiator). Installing radiators at the front of the chassis limits the length of the expansion cards and prevents the installation of fans at the first slot of the top panel.

Black cables and parts are easily hidden inside an all-black chassis; therefore, for visual clarity, we are using an AX760i PSU with a red cable pack and white SATA cables for our pictures. Building a system inside the Fractal Design Node 804 is a fairly easy – as long as the system is relatively simple, without too many components. The addition of liquid coolers, too many drives ,and/or dual GPU setups could easily cause a stressful mess of things inside such a small case. Most of the time required to build a system should be for the routing of the cables. There are no sharp and or dangerous points about the Fractal Design Node 804 that we could locate during our experience with it. 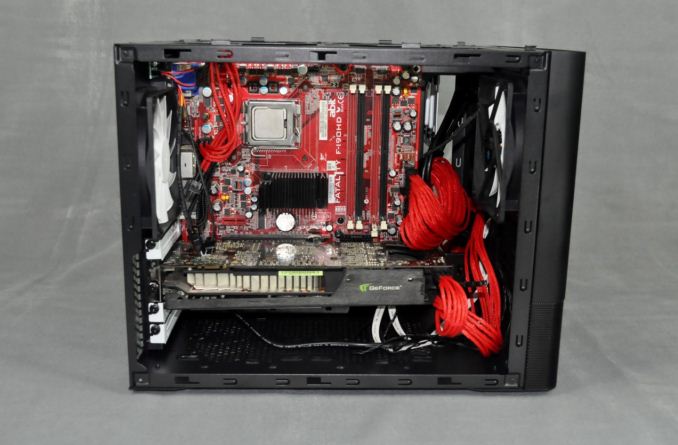 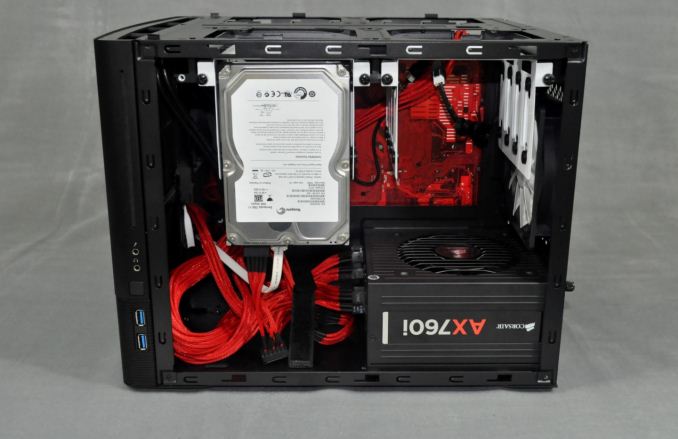 As exhibited in the pictures of our test build, all of the cables are routed through the opening near the front of the case. This calls for a bit more careful planning regarding the cables near the bottom of the motherboard, but a few cable ties and patience can work marvels. The CPU 12V cable can go through a small opening at the top left side of the motherboard tray. Graphics cards up to 320mm can fit but cards longer than 280mm will partially block the opening for the cables and restrict the installation of an additional intake fan. Also, remember that CPU coolers taller than 160mm will not fit – and that is just about every top performance air cooler available today.