The Acer Aspire R 13 Review: Convertible Notebook With A Twist

The Acer Aspire R 13 comes in a couple of different spec levels, with the base model coming with the Core i5-5200U and 8 GB of memory, and the spec bump is to the Core i7-5500U, which is the model that I have today. This is a 2.4 GHz base frequency with a 3.0 GHz Turbo, 4 MB of L3 cache, and Intel’s HD 5500 GPU onboard. The two cores and four threads are all contained within the standard 15 watt thermal envelope of the U series CPUs from Intel.

We’ve been lucky enough to see quite a few Broadwell parts this year, including Core M and several of the U series, and the i7-5500U is near the top end for Broadwell ULV. There are a couple of models above it with a beefier GPU, but those seem to be few and far between in notebooks which is a real shame. It would be nice to see a couple of PC manufacturers step up and include HD 6000 version but I have not seen it happen yet.

To test system performance we put the Acer through our standard notebook workload. To compare the results, I have selected a sampling of comparable devices, but if you would like to check the Acer against any other devices we have tested, please use our notebook bench. 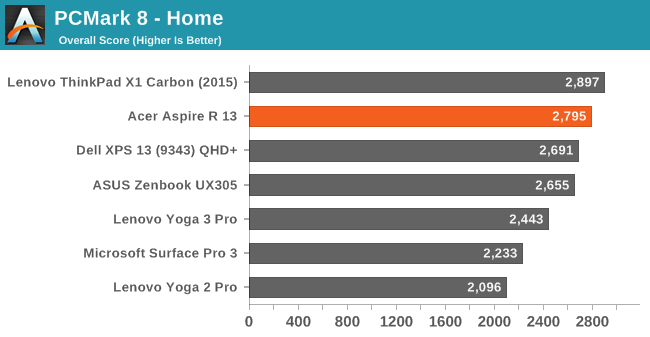 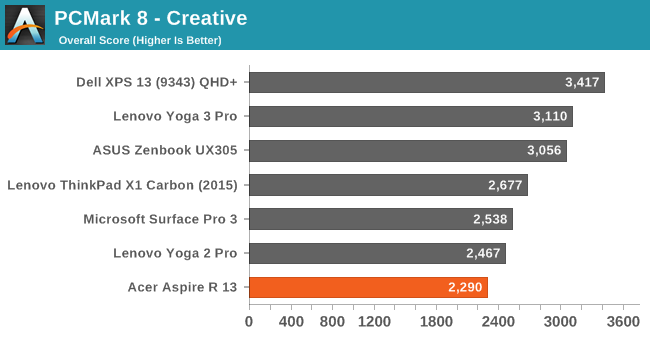 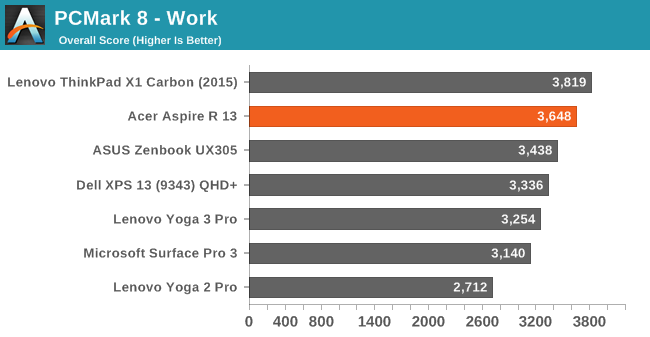 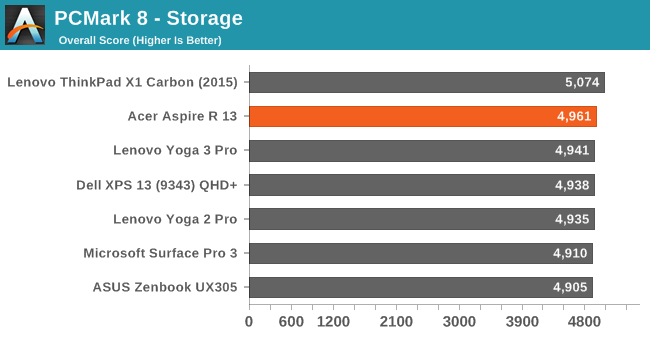 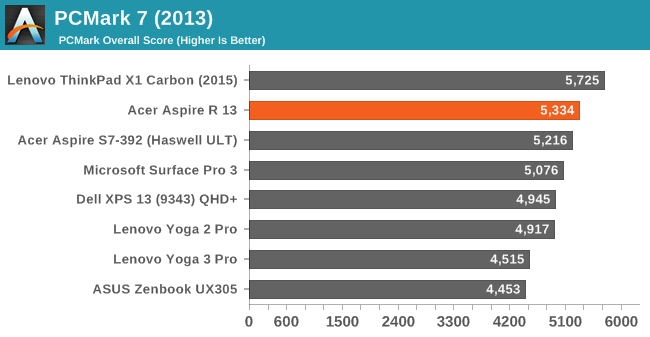 PCMark 8 tries to replicate real workloads with its various tests, including home, creative, work, and storage. All include heavy and light tasks mixed together. The Acer’s Core i7 seems to slot in fairly well between the i5 and top end i7-5600U in the X1 Carbon. 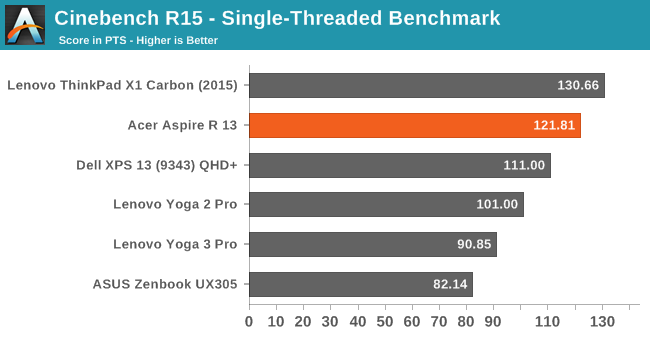 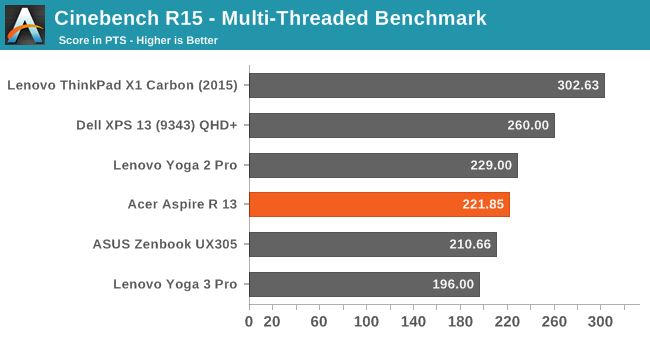 Cinebench is a heavy workload which runs the CPU at 100% for the duration of the test. Once again the higher frequencies of the Core i7 help keep it ahead of the i5 models. 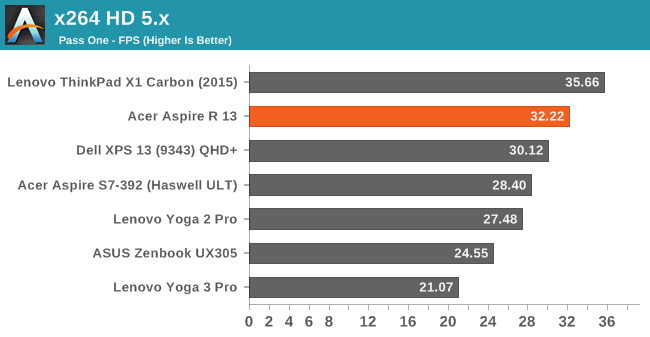 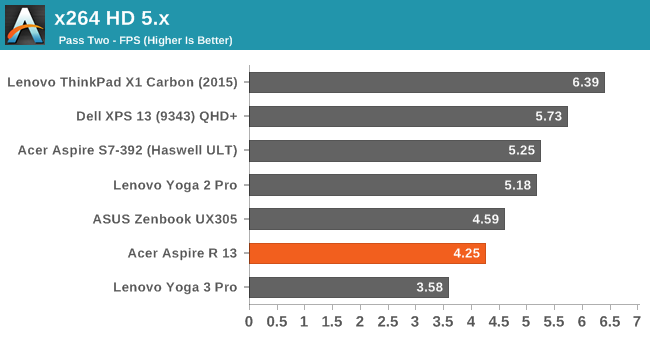 This is a test of converting a video, and much like Cinebench it is a sustained workload. Higher frequencies additional cores help a lot on this test. The Core i7 processors have slightly higher base and turbo frequencies and will generally do well on this test. On pass two, the Acer drops down quite a bit. This is a very long sustained workload and the Acer may be running into thermal issues here - a point that will be looked at in the GPU testing. 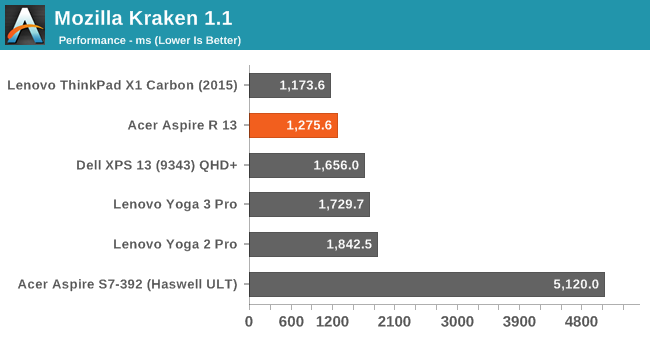 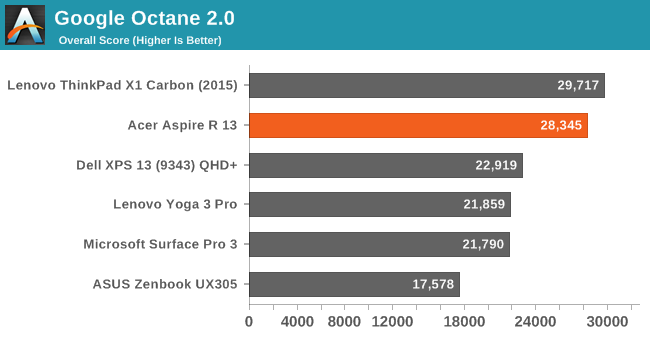 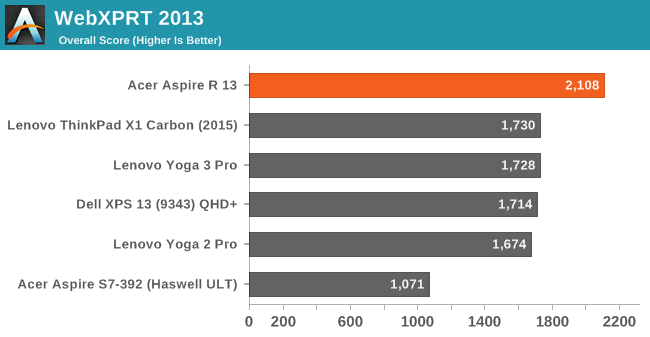 A lot of what we do is on the web, so it is always good to compare web performance. The Core i7 does very well on these tests, coming out with a healthy margin over the i5 models tested.

At this point, the pecking order for the ULV Broadwell processors is fairly well established. The i7-5500U may be the lowest of the mobile Core i7 processors out right now, but it is still a nice bump in performance over the i5 models. The one concern is a drop in performance over sustained workloads which is generally an indicator of thermal issues.