The model from ASRock that we received for review at launch is the Z170 Extreme7+, showcasing the high end of their mainstream (aka ‘channel’) line of motherboards. 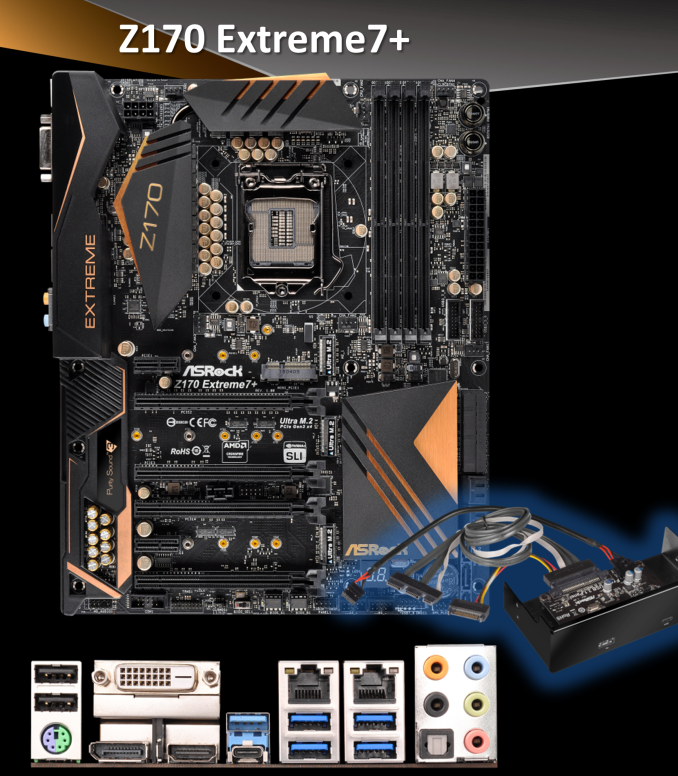 The Extreme7+ will only be sold as a plus version, meaning that each board will come with that USB 3.1 front panel. The design of the Extreme7+ is also a little different to several of the others. The 12-phase power delivery and four slots of DDR4-3600 are normal enough, but the PCIe layout needs a bit of explaining. The top full length slot is x16, which is then followed by a PCIe 3.0 x4 from the chipset. Then we get a PCIe 3.0 x8 from the CPU, and then a PCIe 3.0 x4 from the CPU as well. This technically gives an x8/x4/x4 arrangement from the processor, but with that chipset based slot in the middle between the main x8/x8, we can get a two-card SLI configuration plus another full length single slot device between them without breaking SLI.

To add something else into the mix, we again have three M.2 PCIe 3.0 x4 ports between the PCIe slots and a half-size mini-PCIe slot for a WiFi card. Storage, aside from the M.2, comes from ten SATA 6 Gbps ports which incorporates three SATA Express ports as well – one of which we can use with the USB 3.1 front panel bundled. If you look closely at the image above, one of these SATA Express ports sticks out of the board.

For controllers, the Extreme7+ comes with dual networking in the form of an Intel I219-V and an Intel I211-AT, covering the modern Jacksonville controller and a cheaper model. The ASMedia ASM 1142 provides USB 3.1-A and USB 3.1C on the rear panel, and the system’s audio comes through the enhanced Realtek ALC1150 regime again. Elsewhere on the board we get a total of eight USB 3.0 ports (2 headers, 4 rear), eight USB 2.0 ports (3 headers, 2 rear), a COM port, TPM and onboard buttons. 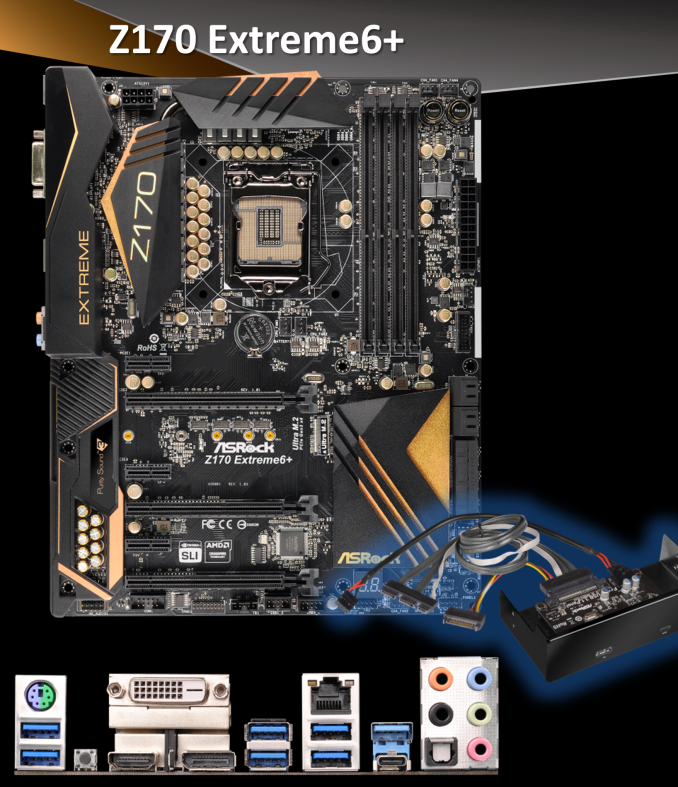 As we move down from the Extreme7, certain features will be stripped but we should see the same basic board each time. With the Extreme6/6+, the middle PCIe 3.0 x4 slot from the chipset has gone, and we are down to a single PCIe 3.0 based M.2 slot. Two of the SATA ports and subsequently a SATA Express is gone, specifically that odd one that was poking out of the motherboard. Only the I219-V network controller remains, but the audio is still the ALC1150 solution. USB 3.1 is still here with Type-A and Type-C connectors, although USB 2.0 has been ejected completely from the rear panel.

ASRock’s goal with the Extreme6 is a more cost effective version of the Extreme platform while still having at least one of each of the higher class (M.2 x4, USB 3.1, I219-V) functionality. 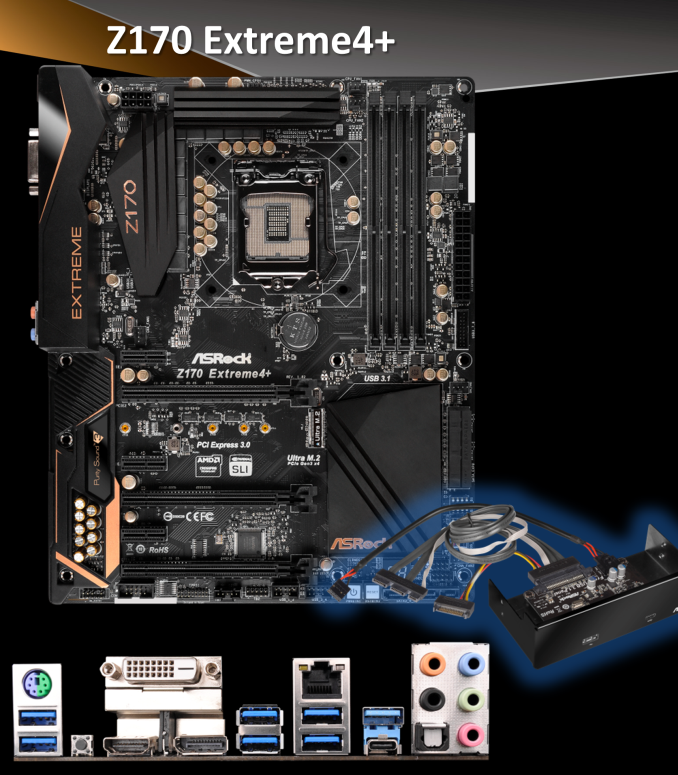 The Extreme4 goes down a notch again, with two fewer SATA ports, two fewer power phases and a reduction in validated DRAM frequency from DDR4-3600 to DDR4-3500. ASRock is billing the Extreme4 as the cheapest motherboard with both SLI and USB 3.1 support with the x8/x8 PCIe configuration as well as the ASMedia ASM1142 based USB 3.1-A and USB 3.1-C onboard.

The Pro line is designed to be ASRock’s more cost effective offerings. Here looks are less important, and fewer of the marketing tick-boxes are met in order to aim these products at specific low-cost build regions. 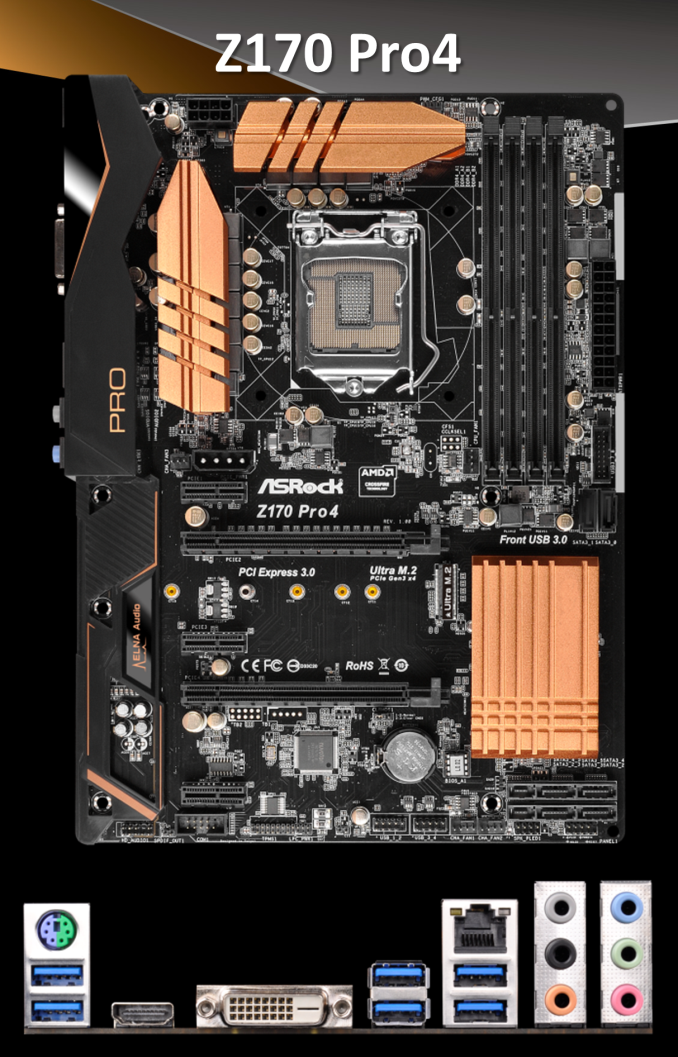 The Pro4 is billed as ASRock’s main motherboard for Z170 in the ATX form factor, intersecting price and feature set. The PCIe 3.0 x8/x8 configuration is not SLI capable, but there is a PCIe 3.0 x4 based M.2 in the middle for the migration to M.2 boot SSDs. There are still six SATA 6 Gbps ports on board with two SATA Express capable combinations, and perhaps surprisingly networking comes from an Intel I219-V network controller. There is no USB 3.1 here, and audio uses the cheaper Realtek ALC892 codec with minor design enhancements.

The Pro4S takes the Pro4 and strips it completely of looks: 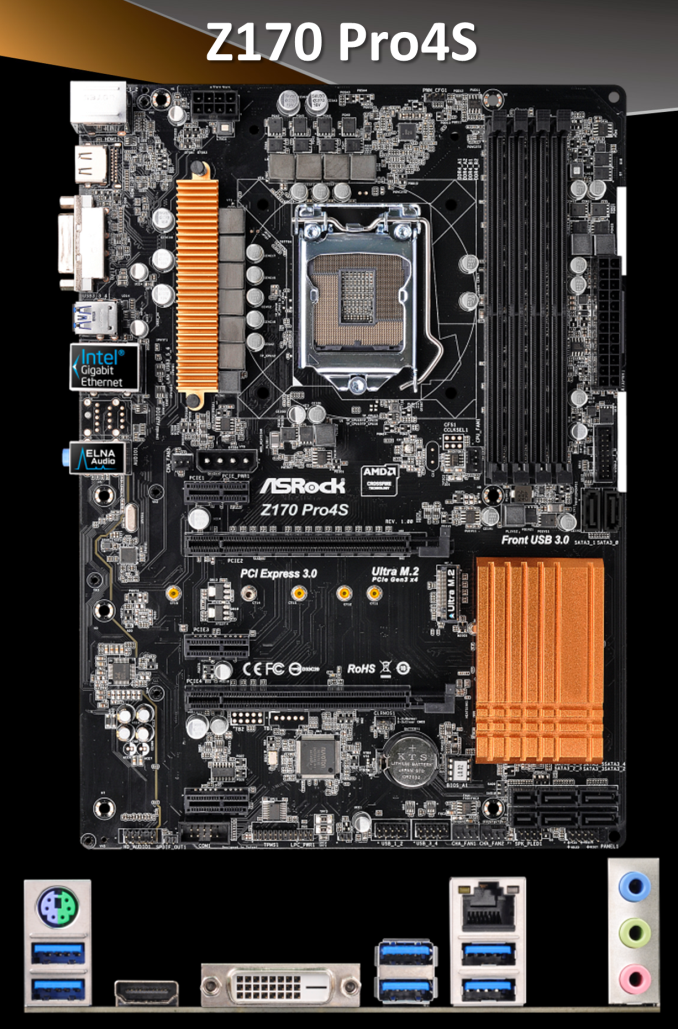 The heatsinks are simpler, the chokes look simpler (probably the same), there is no rear IO cover, normal CPU caps are used and the audio solution converts down to a half-jack. We still have all the other features of the Pro4, namely an x8/x8 PCIe configuration, M.2 x4 in PCIe 3.0 mode, six SATA ports, an Intel I219-V network port and the ALC892 audio. The Pro4S will also be available in a mini-ITX model.