One of the first things that users may notice about the new Kaby Lake processors is that the KBL-Y series is dropping both the m5 and my naming scheme from its segment. We will see m3 still, but this will now be paired with i5 and i7. Intel isn't specifying that m5 or m7 have gone away entirely, but it doesn't seem to be a part of the KBL-Y arrangement this time around. 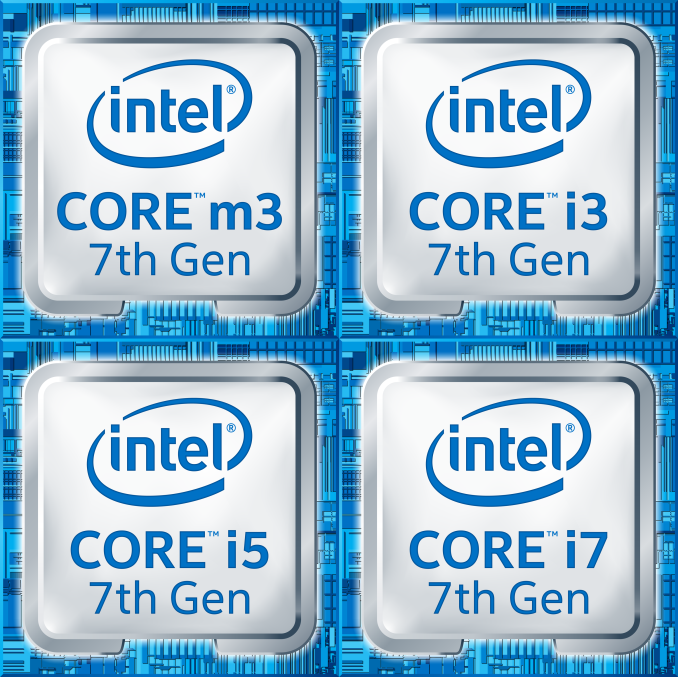 There are a couple of reasons for this - the one Intel discussed with us is that it comes down to performance and OEM requests. An i5 in a 4.5W form factor (or as high as 7W in cTDP Up) performs essentially on par with the KBL-U i5 parts, and OEM customers requested that the naming scheme change to reflect that. The sense of parity and brand between the two, especially when customers look at a device for less than a couple of minutes and anything that they feel familiar with tends to be a bonus.

The other reason is perhaps that the Core M brand as a whole hasn't taken off as Intel thought it would, or 'm' is associated with low power, low performance, or essentially 'mobile'. So one could argue that renaming m5 to i5 is purely a mental adjustment tactic, however I'd hazard a guess and say that if they were called i5 and i7 to begin with, no-one would have batted an eye-lid at the difference. Interestingly enough, it is the i7 version of Kaby Lake-Y that has the highest single core turbo frequency mode out of all the processors being launched today, even the 15W parts. 3.6 GHz for a 4.5W TDP processor is nothing to be sniffed at, although it will depend on the device and OEM configuration that will determine just how long it stays at 3.6 GHz.

Finally, along with the change in how 4.5W parts are branded, Intel has also changed how this information is presented to consumers. The Intel case badge and similar marketing/identification material now includes the processor generation along with its designation. So instead of simply being a "Core i7" of unknown generation, Kaby Lake devices will be badged "Core i7, 7th Gen." This should make it a bit clearer which devices are Kaby Lake versus Skylake, though it does raise the question over whether this will hurt Intel at all once Cannonlake (8th Gen) ships. 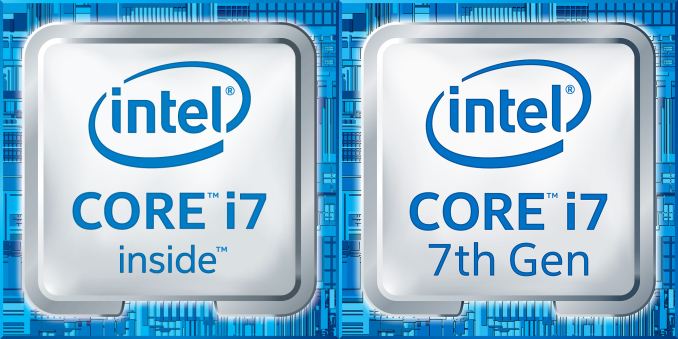 Like Broadwell in 2014, the 2016 launch of Kaby Lake is a bottom-up launch. This means that Intel is starting with the small die, low power Y & U series processors, and then will move further up the stack later on. So all 6 SKUs launching today – 3 at 4.5W and 3 at 15W – are based on the same 2+2 die. This means 2 CPU cores paired with a GT2 iGPU. 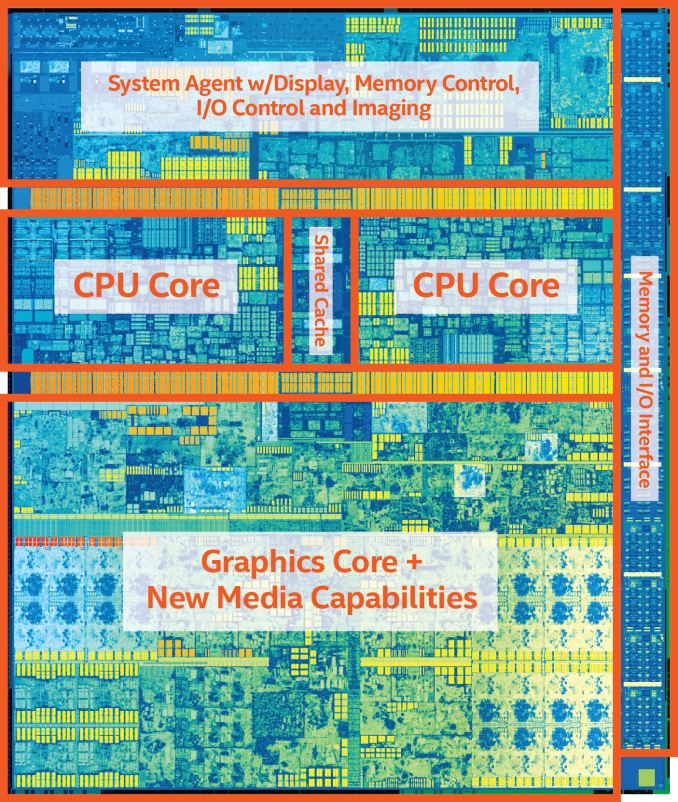 Intel has not disclosed the die size of their 2+2 Kaby Lake die at this time. This likely has something to do with the underlying 14nm+ process being used for Kaby Lake, which has left Intel a bit mum to start with (more on this later). At any rate, the Kaby Lake 2+2 die is not remarkably different in layout or design from Skylake. The big changes are under the hood: the 14nm process, and the GPU media processor improvements introduced with Kaby Lake.

Without further ado, here are the processors. First up, the KBL-Y 4.5W Parts, along with an m7 from Skylake for comparison:

Following on from the tradition with these low TDP parts, they all use a dual core, GT2 die with the low TDP numbers generated from the very low base frequency. Intel's power management system allows for several states that dictate peak turbo frequency, frequency based on power draw, frequency based on skin temperature and thermal throttling. Most of the devices that use Y based processors are designed to offer a good turbo, either single core or dual core, until a certain SoC or skin temperature is reached. Kaby Lake carries on from Skylake in that Intel has increased the capability of the monitoring system to include more OEM-defined sensors and then use internal algorithms as appropriate. Kaby Lake also carries over gyro sensors that change that algorithm based on how the device is being held and what angle - a notebook on a table requires a different set of functions to determine frequency over time compared to a 2-in-1 being held horizontal or vertical, for example. 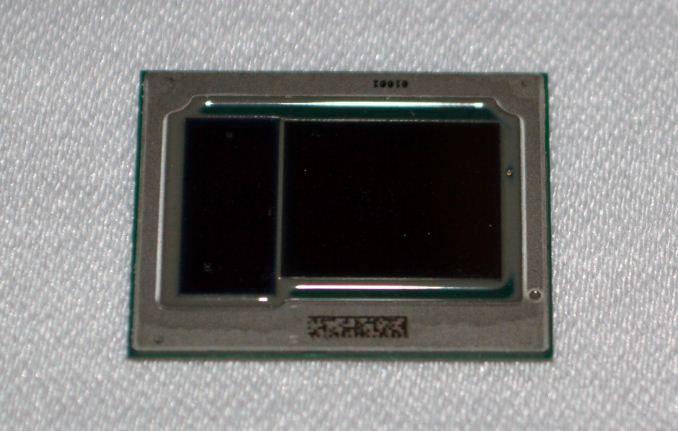 The Y series of CPUs will remain Intel's attack on the high performance, low power market which takes advantage of a scalable microarchitecture but also the lithography advantage that Intel has over its competition. As a result, Kaby Lake-Y is similar to previous Y processors in that they will command a high premium. Even the base m3 processor runs a tray (1000 unit) listed price of $281, and 2-in-1s/notebooks with the similar Skylake parts over the past year have been running at the $600-$700 on the super low end. Mini-PCs have been lower, but still the premium over an Atom processor is palpable. It’s worth noting that the m3 variant does not support TSX-NI compared to the i5 and i7.

The i5-7Y54 mid-processor is actually listed as the same price as the m3, despite the increase in performance in the frequency and better instruction support. This is surprising, but hides any configurable TDP modes as Intel has chosen not to disclose these at this time. Chances are the i5 supports a high cTDP Up mode, but the m3 will support a low cTDP down mode.

The top end Core i7-7Y75 has the highest frequency of any Kaby Lake part in its turbo, at 3.6 GHz, and this is still super impressive for a 4.5W CPU. It all depends on implementation, and at $393 tray price, expect to pay a high premium for the privilege. The super-high-end 2-in-1 devices with Skylake, such as the Huawei Matebook paired with their top memory and storage configurations as well as keyboard, pen and extras, can cost in excess of $2000. This will undoubtedly continue for Kaby Lake this generation, with OEMs attempting to differentiate in style, design, and fight off the Apple factor. If Apple plans to update the new MacBook line this year, chances are that it will have the new Kaby Lake-Y as a direct slot in.

It’s worth noting that for all these Y parts, no exact figures for the graphics were provided. We suspect a direct parity with the previous generation for execution units given that we know it keeps Gen 9 and all three parts use the GT2 configuration (up to 24 EUs), however it will be interesting to see if the frequencies have increased due to the optimized 14nm+ process. There is also still no support for DDR4.

Next is the trio of Kaby Lake-U parts, with a nominal rated TDP of 15W.

On the face of it, the specifications of these three parts look similar to the Y series – dual core with hyperthreading, similar single core frequencies and similar pricing. What drives the TDP up is the base frequency, despite the use of Speed Shift technology (on Windows 10) to bring it down to more palatable levels when not in use. The point is that when the system is in use, it won’t drop below the base frequency, which is 2.4-2.7 GHz in this case, rather than 1.0-1.3 GHz for the Y series.

The Core i3, as with other i3 parts in generations gone by, has no Turbo Boost. This means that all cores and threads will run at a fixed frequency until idle or thermal throttling kicks in. The Core i5 and Core i7, while still dual core with hyperthreading, have Turbo Boost with an increase in both range and base frequency as we go up the chain.

Pricing for the 15W parts is identical to that of the 4.5W parts, with the justification still on the premium performance, but the thermal design means that ‘ultrabook’ style notebooks and NUC/BRIX like mini-PCs are more in line for these parts. Along with DDR3L/LPDDR3 support, we also get DDR4-2133 support with 1.2V modules – this will be an interesting point for users that end up gaming on these systems. 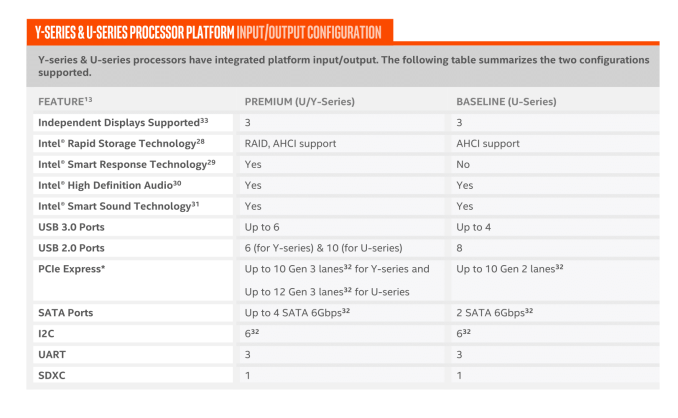 It’s worth noting that the Core i3-7100U also has a different implementation of the integrated chipset, or rather a cut down version (it’s still the same silicon underneath). The Core i3 loses RAID, a couple of USB 3.0 ports, PCIe 3.0 support (from the chipset, more on that later) and SATA ports.

This brings up a couple of things. First, I find it interesting that the m3 variant does not share this cut down feature set, meaning that the m3 products will still support RAID, PCIe 3.0 x4 storage and the like. Also, the fact that the Core i3-7100U and Core i5-7300U are the same price means that it is more of a platform play. With this cut down feature set, it requires a different platform design: an OEM cannot easily adjust the number of USB 3.0 ports on their motherboard and chassis just for one variant of a CPU, especially when the regular design supports both the Core i5-7300U and Core i7-7500U. As a result we might start to see fewer Core i3 variants on the market, except in devices where the limitations have little impact (ultrabooks).

For anyone playing along at home, you may remember that during testing of a Skylake-Y NUC, we found that the PCIe 3.0 x4 slot for M.2 drives was actually limited to PCIe 2.0 x4, effectively reducing the peak bandwidth. At the time we probed Intel and our data sheets to find out that it was actually a limitation imposed by Intel on the CPU which wasn’t obvious from the original launch materials. The interconnect between the CPU cores/system agent and the integrated chipset, what we normally call DMI on a desktop platform but is called OPI on an SoC, was fixed at PCIe 2.0 speeds.

We asked about why this was the case, and we were told that the system actually can support PCIe 3.0 x4 speeds, and the system even tests this on startup, but for stability PCIe 2.0 is chosen. This made the marketing of the NUC a little confusing, especially as PCIe 3.0 x4 for storage was listed as a feature. Working with Intel, they pushed through a new BIOS for the NUC that kept the OPI at PCIe 3.0 x4 speeds, and we were able to get peak bandwidth from our storage devices. However, that BIOS update was limited to one mini-PC from one vendor, leaving all the other vendors to do their own thing.

This time around, Intel is doing the change by default (on every one of these processors, except the Core i3-7100U). The interconnect to the chipset now runs at PCIe 3.0 x4 speeds, allowing the integrated chipset to offer full PCIe 3.0 lanes for extra controllers, storage and other features. For the Y series, this means 10 PCIe 3.0 lanes and the U series get 12 lanes. We could end up seeing some Core i5/i7 devices offer dual M.2 PCIe 3.0 x4 RAID as a result, depending on compatibility. Intel also lists NVMe support for the five processors on OPI 3.0.