Analyzing B450 for AMD Ryzen: A Quick Look at 25+ Motherboards

Both the B450 Gaming K4 and B450 Gaming ITX/ac feature similar designs with gunmetal grey heatsinks which feature fins to help direct airflow through the channels, which in turn should help dissipate any excess heat. The boards both feature support for ASRock’s Polychrome RGB technology, with the B450 Gaming K4 having customizable LEDs under the chipset heatsink and additional expansion through a single addressable LED header and standard RGB LED header. 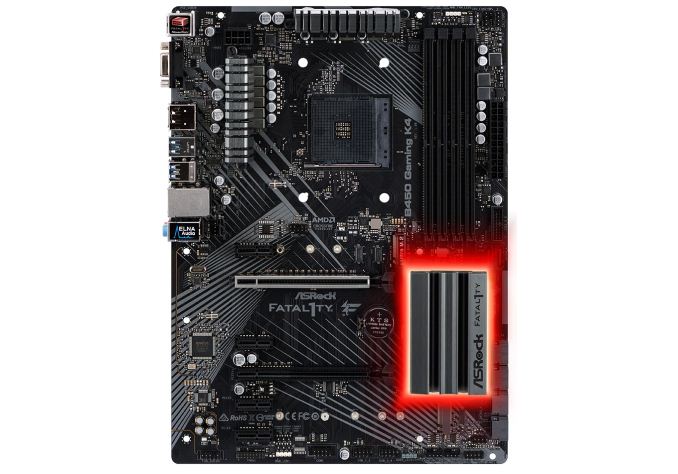 The rear panel of the Fatal1ty B450 Gaming K4 consists of a two USB 3.1 10 Gbps ports (Type-A and Type-C), four USB 3.1 5 Gbps ports, two USB 2.0 ports, an HDMI output, a DisplayPort 1.2 output, a D-sub output and a combo keyboard/mouse PS/2 port. The single LAN port is controlled by a Realtek RTL8111H Gigabit networking chip with the three 3.5mm audio jacks being powered by a Realtek ALC892 audio codec.

The ATX sized B450 Gaming K4 has a host of gaming-themed features, AMD 2-way CrossFire multi-graphics card support (x16 + x4) and integrated RGB. The new ASRock B450 models directly replace the currently available B350 offerings and as it stands currently, the B450 Gaming K4 sits at $99.99.