Thank goodness the Acer Aspire 5740 has a great personality, because it sure isn't a looker. The glossy blue lid's curves suffer from the “bulbosity” we mentioned before. While the dark blue is attractive, the glittery texturing is gaudy and the “Signal Up” logo in the corner always looks like a blemish until you look at the lid up close. And because the lid is glossy plastic, it's the kind of fingerprint magnet we've come to expect.

Before we even get to the insides, though, it's worth mentioning that the Aspire 5740 still uses a mechanical latch to hold the notebook shut. This was actually an initial source of embarrassing confusion: most modern notebooks have a mechanism to keep them shut in the hinge and are easy to open and close. You're probably familiar with it.

The inside of the Aspire 5740 isn't unattractive, but elements of it are still a bit ostentatious. The texturing on the gray plastic used for the palm rests and touchpad is comfortable, and the black matte plastic used for the speakers at the top of the unit is unassuming, but the big power button on the left side with the blue LED illumination is too much, and the “P” button on the right side could easily be confused for a power button. The right speaker is also closer to the center than the left speaker, making for slightly off stereo positioning—not that the speakers are worth using for any serious audio, as they tend to distort at higher volume levels. And then there are the power and battery indicator LEDs at the bottom lip,  and the key lock indicators above the keyboard, the wireless toggle button that illuminates next to them...the design feels scattershot, lacking any kind of cohesion. 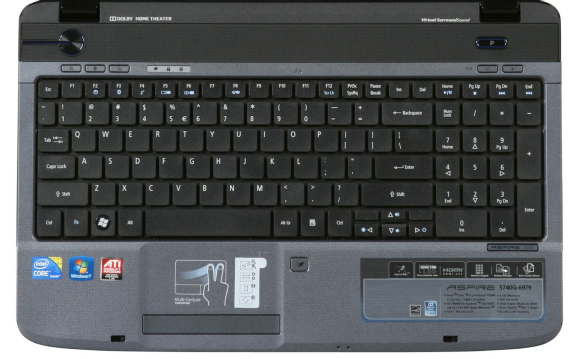 Looks may not be everything, but most damning may just be interfacing with the notebook itself. The screen is adequate for the price range, and the touchpad features multi-touch capability and is smooth and easy to use. Yet the keyboard, despite having an intelligent layout in cramming in the 10-key, wound up being even worse than it looked. Flex isn't an issue, but Acer's bizarre halfway-between-chiclet-and-standard keyboard is staggeringly uncomfortable to use and was enough to turn me off completely from purchasing any unit that uses it. The keys just feel strange and were alarmingly difficult to touch type on. If you're using the notebook principally to game then it shouldn't be a deal-breaker for you, but for any kind of serious writing it's something you will want to play with in the store and make absolutely certain you can live with.

The rest of the build is at least more sensible. USB ports are split evenly between the sides, and heat vents out of the back of the unit instead of on one of the sides and risking warming up the user's mousing hand. If nothing else, the Aspire 5740 is – if a bit cheap looking – a solid machine.