No Integrated Graphics, No Quick Sync

All of this growth in die area comes at the expense of one of Sandy Bridge's greatest assets: its integrated graphics core. SNB-E features no on-die GPU, and as a result it does not feature Quick Sync either. Remember that Quick Sync leverages the GPU's shader array to accelerate some of the transcode pipe, without its presence on SNB-E there's no Quick Sync.

Given the target market for SNB-E's die donor (Xeon servers), further increasing the die area by including an on-die GPU doesn't seem to make sense. Unfortunately desktop users suffer as you lose a very efficient way to transcode videos. Intel argues that you do have more cores to chew through frames with, but the fact remains that Quick Sync frees up your cores to do other things while SNB-E requires that they're all tied up in (quickly) transcoding video. If you don't run any Quick Sync enabled transcoding applications, you won't miss the feature on SNB-E. If you do however, this will be a tradeoff you'll have to come to terms with. 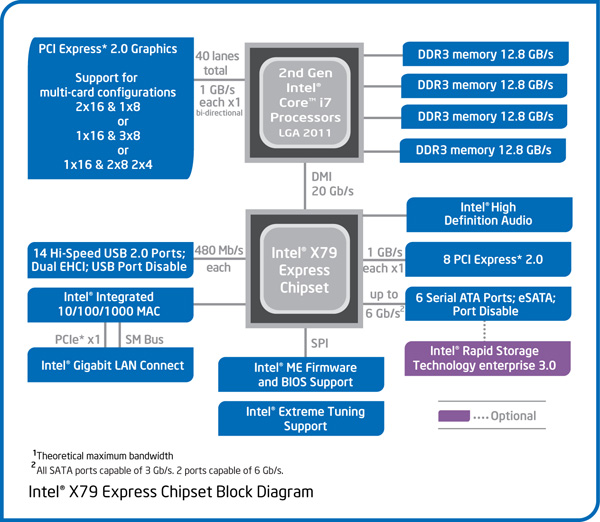 Tons of PCIe and Memory Bandwidth

Occupying the die area where the GPU would normally be is SNB-E's new memory controller. While its predecessor featured a fairly standard dual-channel DDR3 memory controller, SNB-E features four 64-bit DDR3 memory channels. With a single DDR3 DIMM per channel Intel officially supports speeds of up to DDR3-1600, with two DIMMs per channel the max official speed drops to 1333MHz. 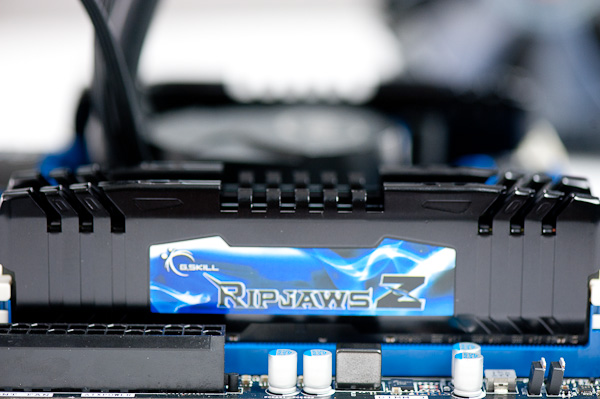 With a quad-channel memory controller you'll have to install DIMMs four at a time to take full advantage of the bandwidth. In response, memory vendors are selling 4 and 8 DIMM kits specifically for SNB-E systems. Most high-end X79 motherboards feature 8 DIMM slots (2 per channel). Just as with previous architectures, installing fewer DIMMs is possible, it simply reduces the peak available memory bandwidth. 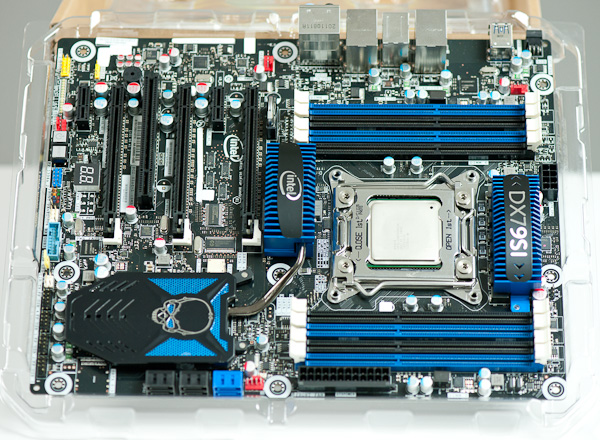 Intel increased bandwidth on the other side of the chip as well. A single SNB-E CPU features 40 PCIe lanes that are compliant with rev 3.0 of the PCI Express Base Specification (aka PCIe 3.0). With no PCIe 3.0 GPUs available (yet) to test and validate the interface, Intel lists PCIe 3.0 support in the chip's datasheet but is publicly guaranteeing PCIe 2.0 speeds. Intel does add that some PCIe devices may be able to operate at Gen 3 speeds, but we'll have to wait and see once those devices hit the market.

The PCIe lanes off the CPU are quite configurable as you can see from the diagram above. Users running dual-GPU setups can enjoy the fact that both GPUs will have a full x16 interface to SNB-E (vs x8 in SNB). If you're looking for this to deliver a tangible performance increase, you'll be disappointed:

Modern GPUs don't lose much performance in games, even at high quality settings, when going from a x16 to a x8 slot.

I tested PCIe performance with an OCZ Z-Drive R4 PCIe SSD to ensure nothing was lost in the move to the new architecture. Compared to X58, I saw no real deltas in transfers to/from the Z-Drive R4:

Intel's current RST (Rapid Story Technology) drivers don't support X79, however Intel's RSTe (for enterprise) 3.0 will support the platform once available. We got our hands on an engineering build of the software, which identifies the X79's SATA controller as an Intel C600: 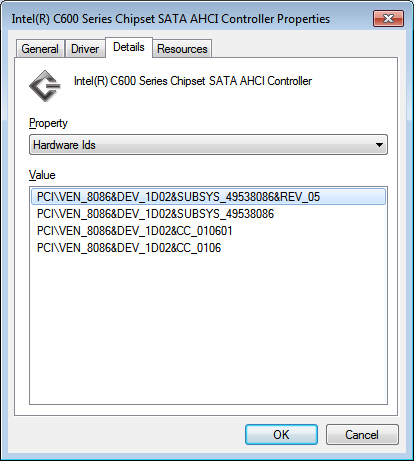 Intel's enterprise chipsets use the Cxxx nomenclature, so this label makes sense. A quick look at Intel's RSTe readme tells us a little more about Intel's C600 controller:

As was originally rumored, X79 was supposed to support both SATA and SAS. Issues with the implementation of the latter forced Intel to kill SAS support and go with the same 4+2 3Gbps/6Gbps SATA implementation 6-series chipset users get. I would've at least liked to have had more 6Gbps SATA ports. It's quite disappointing to see Intel's flagship chipset lacking feature parity with AMD's year-old 8-series chipsets. 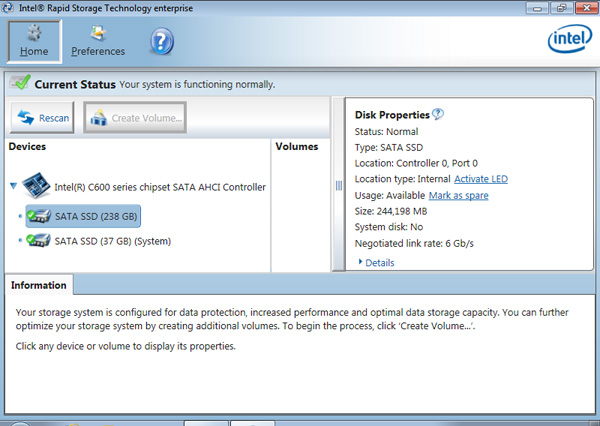 I ran a sanity test on Intel's X79 against some of our H67 data for SATA performance with a Crucial m4 SSD. It looks like 6Gbps SATA performance is identical to the mainstream Sandy Bridge platform: