Given that the iBUYPOWER Erebus GT we have for review now is essentially identical in terms of build quality to the one we reviewed a month-and-a-half ago, there isn't a whole lot to update on. Build quality on this review unit was excellent, period, and the components iBUYPOWER chose were all solid, name brand selections. If anything, I think part of it might have been over-engineered. 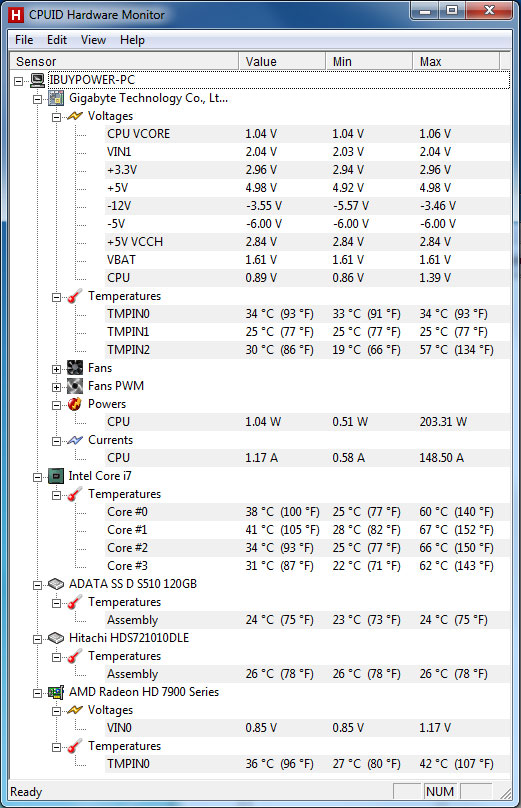 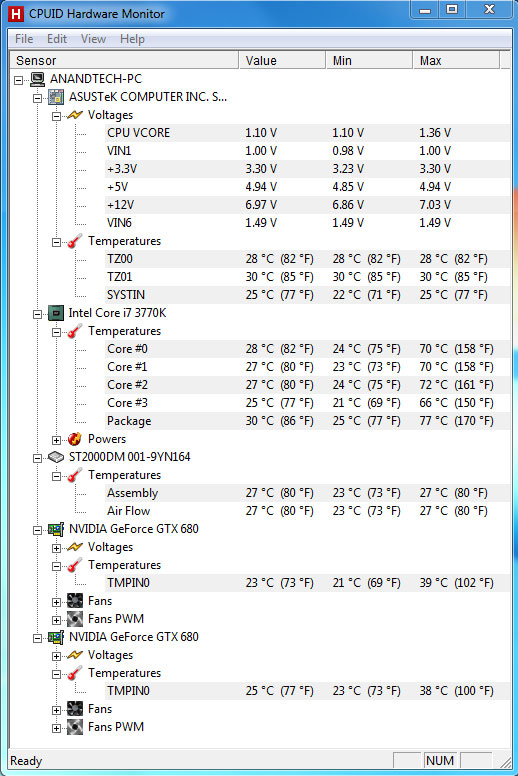 First, it's pretty obvious the water-cooling loop is doing its job on the video cards, and by doing so they give NVIDIA's GPU Boost a lot of thermal leeway. iBUYPOWER didn't overclock the GTX 680s in the Erebus GT, but odds are good you could probably eke out even more performance if you were somehow not satisfied with two GTX 680s in SLI. Second, the i7-3770K definitely runs hotter than the i7-2700K. Not by a tremendous degree, but there's a difference. Keep in mind that the ambient temperature in the room when testing the i7-3770K was closer to 21C, and definitely lower than it was when testing the i7-2700K.

Something to consider is that Ivy Bridge is a smaller chip than Sandy Bridge, but while it's more power efficient (see below), it's also more power dense. If we just use the base TDP, Sandy Bridge 4C is 95W in a 216mm2 die, for a power density of 0.44W/mm2. Ivy Bridge 4C by comparison is 77W in 160mm2, or 0.48W/mm2. That's only a 9% increase, but given how IVB reacts to overclocking and voltage, it's not too surprising that maximum reasonable overclocks are down for this first round of 22nm parts.

I'll say I'm not sure that HWMonitor's wattage readings are 100% accurate, either; the 203W it reports for the overclocked i7-2700K doesn't line up with our own power consumption test results, while HWMonitor reported between 50W and 70W for the i7-3770K. That's a little more believable given how frugal this configuration was with power in our test results, but still seems on the low side.

In terms of noise, it seems like someone heard my complaint about the fans in the first Erebus GT because this one comes with a fan controller. iBUYPOWER employs NZXT's six-channel analog fan controller, and it's very easy to adjust fan speeds to strike a good balance between noise and performance. I use the same controller in my own personal desktop.

Where things get really exciting, actually, is in how much power this Erebus GT pulls from the wall. Keep in mind we're still dealing with a custom liquid-cooling loop, but thankfully iBUYPOWER applies an offset voltage that allows the system to idle properly. 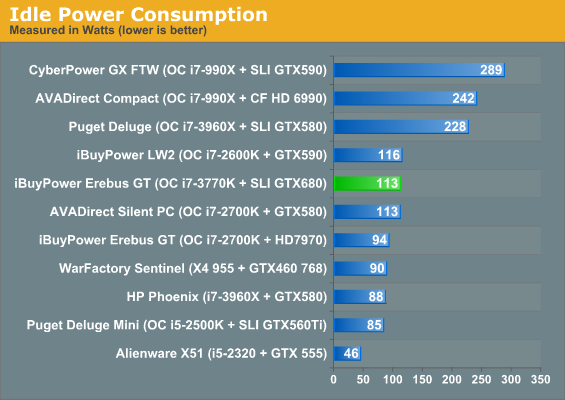 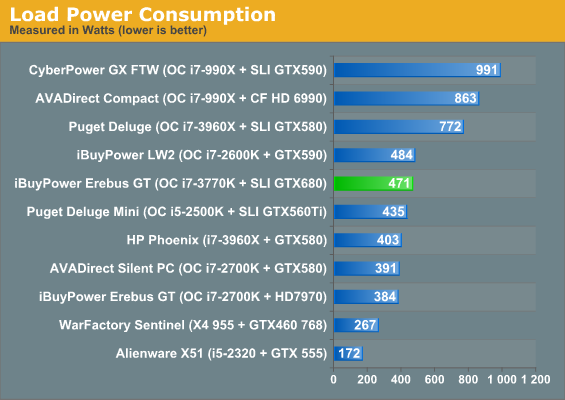 Power consumption is, frankly, outstanding. Intel's i7-3770K, at least overclocked where it is in this system, still sips power, and the pair of GTX 680s are able to provide performance comparable to or better than a pair of GTX 590s at roughly half the power draw.

As a result, I honestly feel like the 1.2kW PSU is absolute overkill for the Erebus GT. It simply doesn't need it; a 750W unit would've done the job with plenty of headroom to spare. This configuration is incredibly efficient for the performance you get, so there's no need to waste the extra money on a huge power supply.