Because of the relatively low power consumption of GK104 relative to past high-end NVIDIA GPUs, NVIDIA has developed a penchant for small cards. While the GTX 680 was a rather standard 10” long, NVIDIA also managed to cram the GTX 690 into the same amount of space. Meanwhile the GTX 670 takes this to a whole new level. 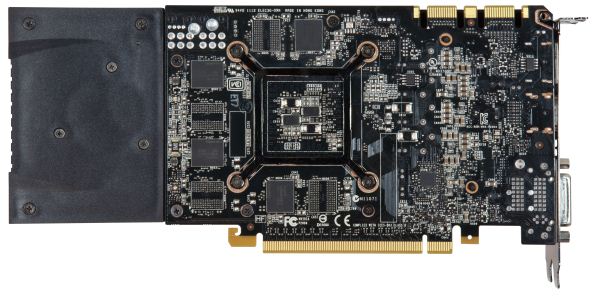 We’ll start at the back as this is really where NVIDIA’s fascination with small size makes itself apparent. The complete card is 9.5” long, however the actual PCB is far shorter at only 6.75” long, 3.25” shorter than the GTX 680’s PCB. In fact it would be fair to say that rather than strapping a cooler onto a card, NVIDIA strapped a card onto a cooler. NVIDIA has certainly done short PCBs before – such as with one of the latest GTX 560 Ti designs – but never on a GTX x70 part before. But given the similarities between GK104 and GF114, this isn’t wholly surprising, if not to be expected.

In any case this odd pairing of a small PCB with a large cooler is no accident. With a TDP of only 170W NVIDIA doesn’t necessarily need a huge PCB, but because they wanted a blower for a cooler they needed a large cooler. The positioning of the GPU and various electronic components meant that the only place to put a blower fan was off of the PCB entirely, as the GK104 GPU is already fairly close to the rear of the card. Meanwhile the choice of a blower seems largely driven by the fact that this is an x70 card – NVIDIA did an excellent job with the GTX 560 Ti’s open air cooler, which was designed for the same 170W TDP, so the choice is effectively arbitrary from a technical standpoint (there’s no reason to believe $400 customers are any less likely to have a well-ventilated case than $250 buyers). Accordingly, it will be NVIDIA’s partners that will be stepping in with open air coolers of their own designs.

Starting as always at the top, as we previously mentioned the reference GTX 670 is outfitted with a 9.5” long fully shrouded blower. NVIDIA tells us that the GTX 670 uses the same fan as the GTX 680, and while they’re nearly identical in design, based on our noise tests they’re likely not identical. On that note unlike the GTX 680 the fan is no longer placed high to line up with the exhaust vent, so the GTX 670 is a bit more symmetrical in design than the GTX 680 was.

Lifting the cooler we can see that NVIDIA has gone with a fairly simple design here. The fan vents into a block-style aluminum heatsink with a copper baseplate, providing cooling for the GPU. Elsewhere we’ll see a moderately sized aluminum heatsink clamped down on top of the VRMs towards the front of the card. There is no cooling provided for the GDDR5 RAM. 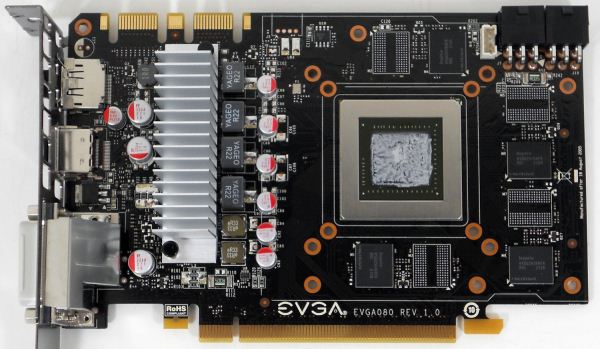 As for the PCB, as we mentioned previously due to the lower TDP of the GTX 670 NVIDIA has been able to save some space. The VRM circuitry has been moved to the front of the card, leaving the GPU and the RAM towards the rear and allowing NVIDIA to simply omit a fair bit of PCB space. Of course with such small VRM circuitry the reference GTX 670 isn’t built for heavy overclocking – like the other GTX 600 cards NVIDIA isn’t even allowing overvolting on reference GTX 670 PCBs – so it will be up to partners with custom PCBs to enable that kind of functionality. Curiously only 4 of the 8 Hynix R0C GDDR5 RAM chips are on the front side of the PCB; the other 4 are on the rear. We typically only see rear-mounted RAM in cards with 16/24 chips, as 8/12 will easily fit on the same side.

Elsewhere at the top of the card we’ll find the PCIe power sockets and SLI connectors. Since NVIDIA isn’t scrambling to save space like they were with the GTX 680, the GTX 670’s PCIe power sockets are laid out in a traditional side-by-side manner. As for the SLI connectors, since this is a high-end GeForce card NVIDIA provides 2 connectors, allowing for the card to be used in 3-way SLI.

Finally at the front of the card NVIDIA is using the same I/O port configuration and bracket that we first saw with the GTX 680. This means 1 DL-DVI-D port, 1 DL-DVI-I port, 1 full size HDMI 1.4 port, and 1 full size DisplayPort 1.2. This also means the GTX 670 follows the same rules as the GTX 680 when it comes to being able to idle with multiple monitors.