Intel: For Mainstream Gamers, Our IGPs Are Equivalent to Discrete GPUs

Intel’s integrated graphics processors (iGPUs) are the most widespread PC-class graphics adapters on the planet. Enthusiasts of high-performance personal computers do not use Intel’s iGPUs, but the world’s largest developer of microprocessors says that for mainstream and casual gamers its graphics solutions offer performance, which is comparable to that of inexpensive discrete video cards.

“For the mainstream and casual gamer, we have improved our Iris and Iris Pro graphics tremendously,” said Gregory Bryant, vice president and general manager of the desktop client platforms at Intel, at the J.P. Morgan Tech Forum at the 2016 International CES. “We have improved our graphics performance [by 30 times] from where it was five years ago. We believe that the performance of Intel’s integrated graphics today, what we offer in the products […], is equivalent to the performance of about 80% of discrete [GPU] installed base.”

Intel has been improving its integrated graphics cores at a rapid pace after the company cancelled its discrete graphics processing unit code-named Larrabee in 2010. Thanks to timely transition to newer process technologies, Intel could increase transistor budgets of its central processing units significantly every couple of years. As the company did not increase the number of general-purpose cores inside its mainstream CPUs for desktop and mobile personal computers in the recent years, the lion’s share of that additional transistor budget was spent on iGPU-related improvements. 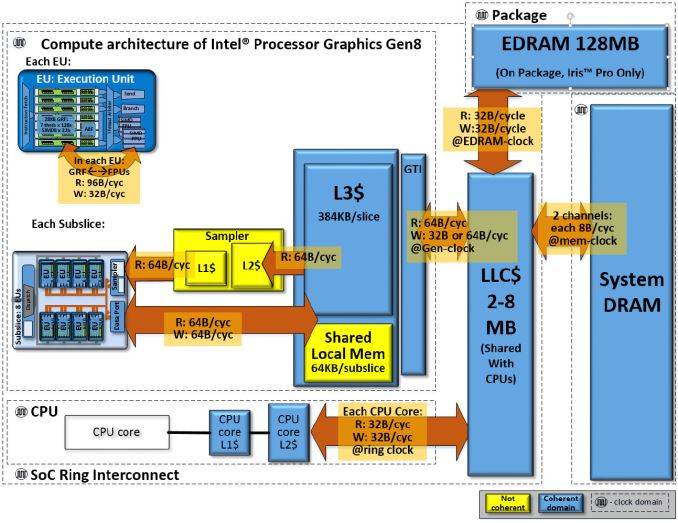 Intel considers its code-named Clarkdale and Arrandale processors its first-generation CPUs with integrated graphics (which is not entirely correct since these CPUs had two dies: the processor die as well as graphics and integrated memory controller die). Back then, Intel’s most advanced iGPU featured 12 execution units (EU) with peak compute performance of around 43 GFLOPS. Since then, the architecture of Intel’s integrated graphics processors has evolved to accommodate new features and gain performance. Today, each EU features two ALUs that can execute up to four 32-bit floating point or integer operations per cycle (in fact, one of the two ALUs in Intel’s Gen8 EU also supports double precision 64-bit floating point operations). Intel’s latest microprocessors — Broadwell with GT3e and Skylake with GT4e graphics cores — have Iris Pro iGPUs with 48 and 72 EUs as well as peak compute performance of 883 and 1152 GFLOPS, respectively. 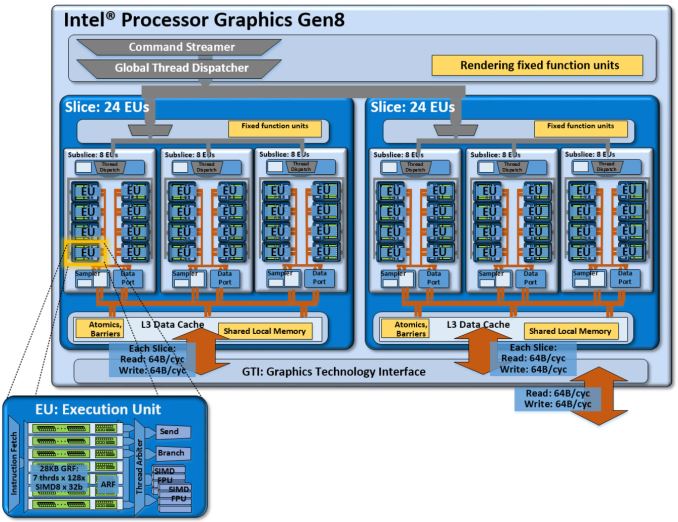 While Intel did not define what it considered to be the installed base of discrete graphics cards, it is obvious that the company compares its recent Iris and Iris Pro integrated graphics processors to discrete graphics adapters sold in the last five or even more years and which are currently in use. 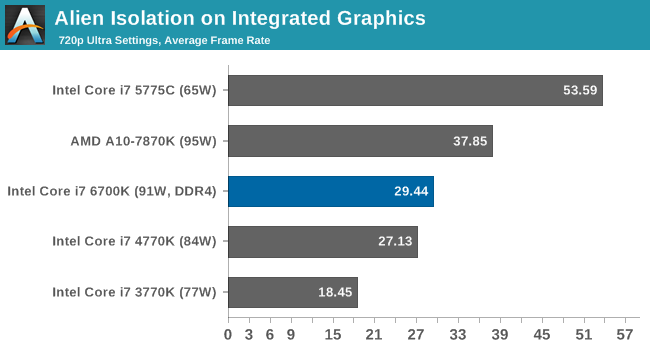 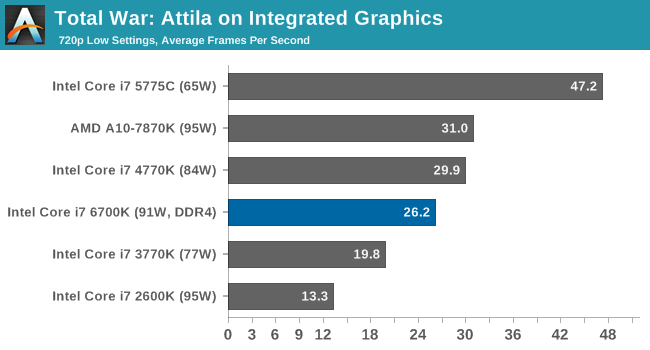 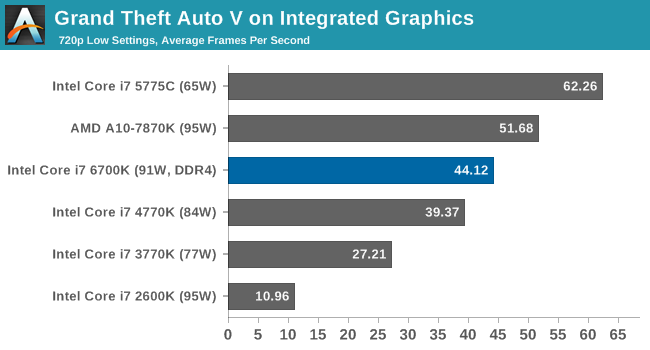 Because many people do not play demanding games that use the latest application programming interfaces (APIs), performance and features of Intel’s modern iGPUs may be enough for their needs. Moreover, since casual and even some mainstream gamers usually buy low-end graphics adapters, Intel’s Iris Pro 6200 and Iris Pro 580 can actually outperform such GPUs (or offer similar performance). It is not clear whether 80% of discrete graphics boards currently in use belong to the entry-level segment, but it evident that contemporary iGPUs are somewhat better than cheap video cards.

Even though enthusiast gamers do not use Intel’s high-end iGPUs, the company continues to thrive because of PC gaming. According to Intel’s management, sales of its Core i7-series microprocessors set records in Q2 2015 despite weak demand for personal computers overall. Moreover, Intel claims that shipments of high-end enthusiast-class hardware in general are at all-time high and growing. Intel sells not only powerful Core i7 CPUs with unlocked multiplier to demanding gamers, but also chipsets, solid-state drives, various controllers and other components for high-end PCs. As a result, the company takes advantage of increasing demand for powerful personal computers.