The Nuts and Bolts of Thunderbolt 3

In order to understand and appreciate Thunderbolt 3, it is important to look at how Thunderbolt has evolved over the last five years. Thunderbolt was launched in 2011 to provide a unified interface with enough bandwidth to satisfy virtually everything needed simultaneously in terms of external I/O and display output. The first two versions shared the same cabling and connectors as mini-DisplayPort. They essentially muxed / demuxed PCIe lanes and DisplayPort lanes over a Thunderbolt cable using Thunderbolt controllers.

At the time of its launch, Thunderbolt was facing competition from USB 3.0 which had already seen a lot of adoption on the PC side. The parallels between USB 2.0 / FireWire and USB 3.0 / Thunderbolt were difficult to ignore. Even after Thunderbolt 2 was launched (with the ability to aggregate the two discrete bidirectional 10Gbps channels in the first version of Thunderbolt), the perception remained that it was relevant only to Mac users. Despite a number of PC components with Thunderbolt 2 integrated, Windows users never found the technology to live up to its advertised potential. Common complaints included peripherals not carrying certification for use on PCs, peripherals outright not working on PCs, unreliable hot-plugging and degraded performance compared to what one could obtain with the same device in a Mac.

In 2012, Intel luanched an Ivy Bridge NUC with Thunderbolt integrated. Unfortunately, the issues cited above resulted in Thunderbolt getting completely dropped from the NUC lineup. It was a golden chance for Intel to drive up Thunderbolt adoption, but, the overall peripheral market put a spanner in the works.

While the 'Thunderbolt for PCs' market was trying to build momentum, USB-IF started to finalize the specifications for USB 3.1 that could deliver up to 10 Gbps of theoretical bandwidth. By mid-2015, the USB consortium had announced both 10Gbps “Superspeed+” USB 3.1 Gen 2 and the new USB Type-C connector, a compact, reversible connector designed to drive the standard for the next decade or more. The introduction of USB Alternate Mode functionality – the ability for USB Type-C to carry other protocols along with (or instead of) USB Superspeed data – made USB more flexible than ever. VESA had also announced that DisplayPort would be supporting alternate mode to deliver DisplayPort video over USB Type-C ports and cables.

At Computex 2015, Intel announced Thunderbolt 3. It marked a shift in the signaling layer from what was used in Thunderbolt 1 and Thunderbolt 2. This was done in order to support more bandwidth per cable. By taking advantage of USB Type-C's alternate modes (i.e, the four high-speed data lanes in the Type-C specifications), Thunderbolt 3 became a standard built on top of the USB Type-C port. 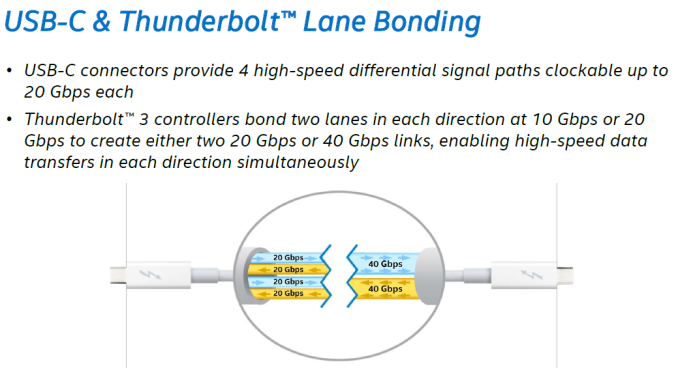 Intel also markets Thunderbolt as the 'Type-C that does it all'. It is easy to see the reason behind this.

Consumers should always check the logo next to their Type-C port in order to identify the capabilities of the port in terms of the bandwidth available, power delivery capability and DisplayPort carriage support. Intel wants to bring it across to consumers that the Thunderbolt logo encompasses all these capabilities. Readers might wonder where the USB 3.1 capabilities suggested above come from. This is where the Alpine Ridge controller comes into the picture.

Intel's chipsets usually take a generation or two after the introduction of any I/O version update (say, SATA II to SATA III, or, USB 2.0 to USB 3.0) before getting native support for the latest version. In the meanwhile, motherboard vendors resort to third-party bridge chips that interface with the PCH using PCIe lanes to provide the latest and greatest I/Os. The same thing is happening currently with USB 3.1, and this is where Intel has found a way to sneak in Thunderbolt support into more systems. 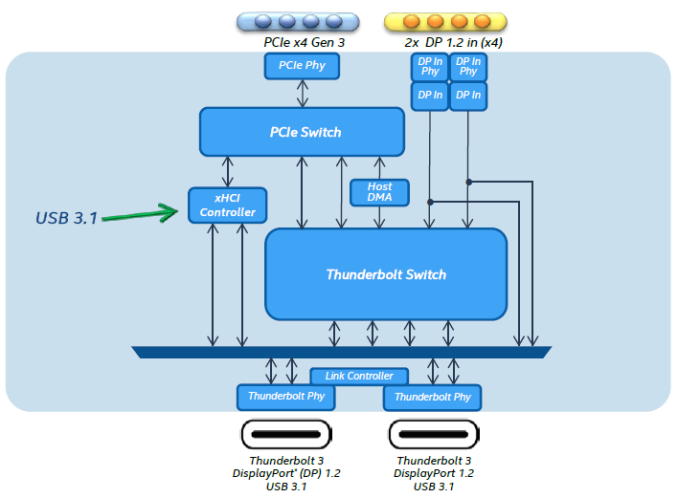 Given that motherboard vendors integrate a USB 3.1 Gen 2 bridge chip in most mid-range and higher products, it actually costs them only a slight premium to go in for Alpine Ridge as compared to, say, an ASMedia bridge chip which can only provide USB 3.1 Gen 2 functionality. 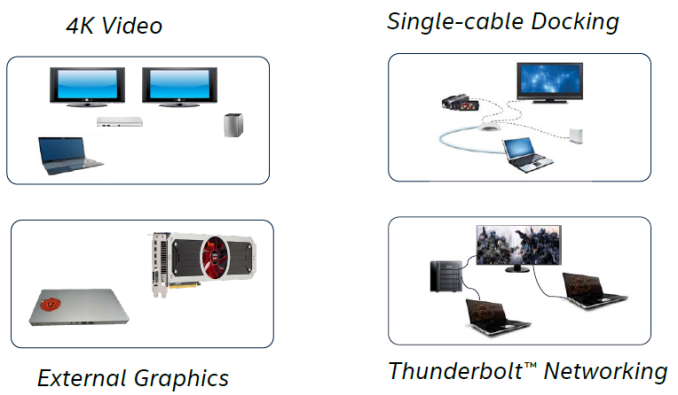 Thunderbolt Networking also allows creation of a 10 Gbps network for peer-to-peer connection between various computing systems (based on a network adapter model in the host OS).

Given Intel's lofty goals with Thunderbolt 3, and the fact that systems with the ability to act as Thunderbolt 3 hosts have been shipping since late last year, it was imperative that various Thunderbolt 3 products enabling the above usage scenarios had to come to the market soon. The credit for being the first shipping Thunderbolt 3 peripheral goes to the Akitio Thunder3 Duo Pro. Intel and Akitio shipped us a couple of units so that we could check out the capabilities of Thunderbolt 3 in practical scenarios.