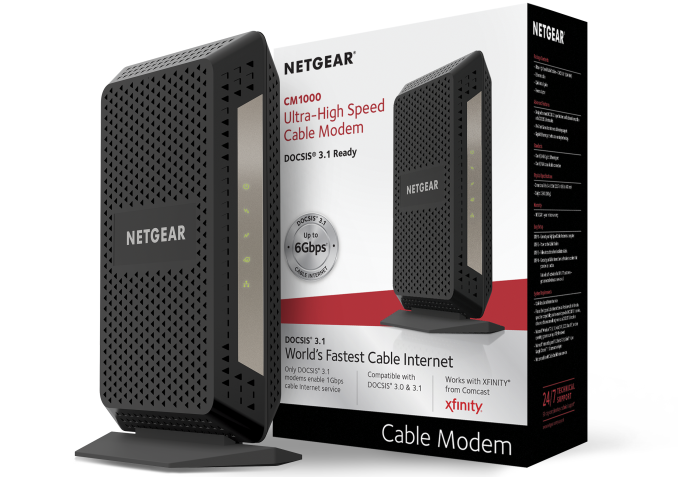 Netgear became one of the first vendors to bring a DOCSIS 3.1 cable modem to the market last month with the availability of the CM1000. It is based on the Broadcom BCM3390 cable modem SoC announced at CES 2015.

DOCSIS 3.1 is one of the most awaited developments in the cable modem industry, allowing ISPs to provide consumers with gigabit and higher speeds without altering existing infrastructure. The specifications support speeds up to 10 Gbps, but, the first generation chipsets like the BCM3390 support only speeds up to 6 Gbps. Compared to the 6- and 8 MHz-wide channels in DOCSIS 3.0, DOCSIS 3.1 uses 20-50 kHz-wide OFDM subcarriers. These can be bonded together in 200 MHz-wide blocks. Note that DOCSIS 3.1 is still not symmetric - while download speeds can go as high as 10 Gbps, upstream rates have a 1 Gbps ceiling.

The CM1000 supports 32 downstream and 8 upstream SC-QAM channels for theoretical downlink speeds of 6 Gbps. Its Ethernet port is still 1 Gbps, and doesn't take full advantage of the capabilities of the BCM3390.

This CableLabs-certified modem is supported by Xfinity, Cox and Time Warner in the US market. It is also backwards-compatible with existing DOCSIS 3.0 networks. Customer experience with the modem is heavily reliant on the equipment being used by the ISP in the area, with many early adopters reporting activation issues. The firmware on the latest units supposedly fixes these problems. If one wants the latest and greatest in cable modem technology, or, is interested in the gigabit-tier services from the cable ISPs, the Netgear CM1000 ($180) looks like the only choice in the retail market right now.

In related news, Netgear is also launching the C7100v - the Nighthawk AC1900 Wi-Fi Cable Modem Router with voice capabilities. It is based on a Broadcom platform, and has a 24x8 modem (up to 960 Mbps downstream speeds) along with a 3x3 802.11ac router (similar to the Nighthawk R7000, but, with a 1.6 GHz SoC). There are two integrated voice lines that get automatic priority over data. The device is meant for the retail market, and will have a MSRP of $300 at launch later this year.

On the switch front, we have the Nighthawk S8000 8-port gaming and media switch (GS808E) meant for prosumers in the home environment with Layer 2 switching and web management (Plus) capabilities. The industrial design shows the Nighthawk branding clearly. It handles appropriate QoS settings for traffic from games and media streaming services such as Netflix. There is a web-based GUI appropriate for the target market, with pre-configured settings available for each port. The switch also allows teaming of up to four ports with dynamic link aggregation. This 8-port switch is expected to become available towards the end of this quarter for $100.

Netgear is also expanding its PoE switch offerings. The 'mount-anywhere' web-managed (Plus) switches became hugely popular after their introduction last year. As part of the CES product launches, Netgear is adding the GSS108EPP and GS408EPP with 8 Gigabit ports each. The GSS108EPP comes in the Click format and has four PoE+ ports (total 47W), while the GS408EPP comes in a easy-mount form factor (such that two switches can be placed back to back in a 1U rack slot) and has 8 PoE+ ports (seven active at a time, with one used for uplink) with a 124W power budget. Both are web-managed Plus switches with L2 management capabilities. One of the innovative features is the ability to configure the power budget for each port. The GSS108EPP is passively cooled. It will have a MSRP of $150, while the GS408EPP will have a MSRP of $270.