The Gaming M7 ACK's BIOS should look familiar to many who have used any MSI boards recently. The Click Bios 5 is set up exactly as we have seen the others, with an EZ Mode being the landing page. Since the M7 ACK is part of the Enthusiast gaming segment, the BIOS receives the red and black theme treatment we are familiar with.

The EZ Mode portion of the BIOS is designed to be informative as well as allowing editing of a few options. Across the top we see the Game Boost button for one-touch (or twist of the onboard button) overclocking. Each setting will implement a pre-defined overclocking profile. For our CPU, the highest setting, 11, and could send the i9-7900X to 5 GHz on a single core. Next to the Game Boost button is another button to enable XMP profiles. To the right of it is an informative dashboard showing the CPU, motherboard, memory size, Vcore, BIOS version, and boot order (can change this here by dragging the icons around). 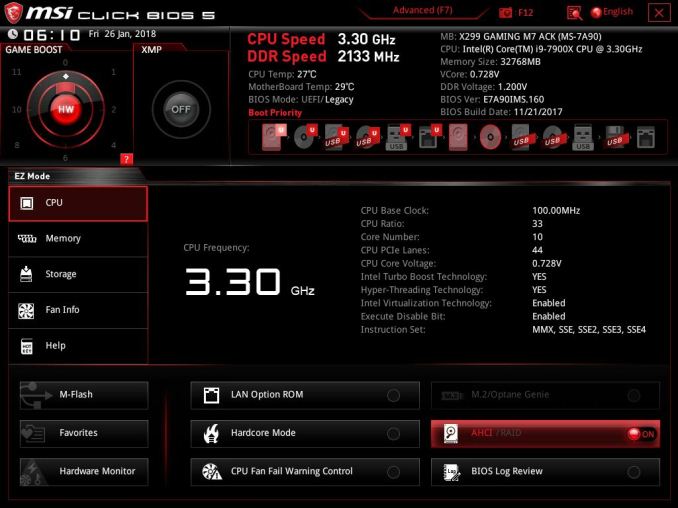 The advanced version of the BIOS 'unlocks' the rest of the features. In typical Click BIOS 5 fashion, we see the informational dashboard still up at the top, with the bottom replaced by several sections: 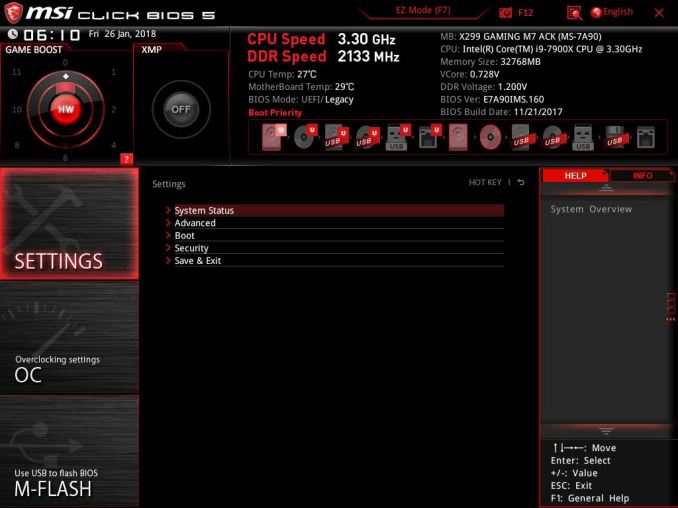 The settings section includes sub-headings for System Status, Advanced, Boot, Security, and Save and Exit. The Advanced section contains options for PCI Subsystem settings, Intel VROC configurations, USB configuration, Integrated Peripherals section, as well as power management and Windows OS configuration options. In a nutshell, anything you need to edit from OS selection to enabling/disabling onboard functionality should be found here. 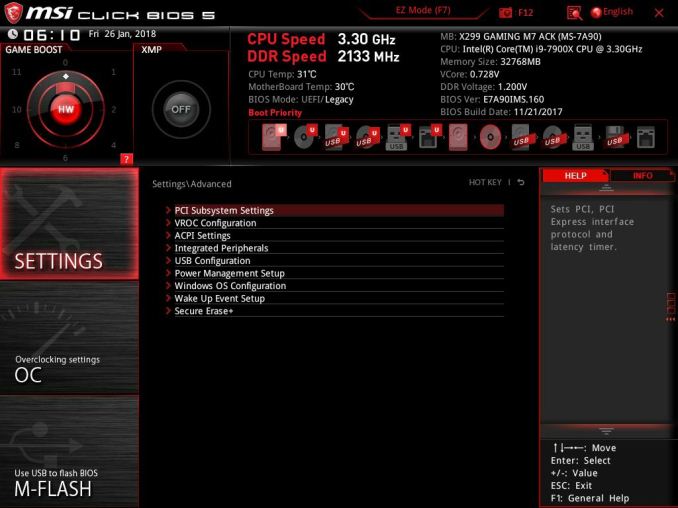 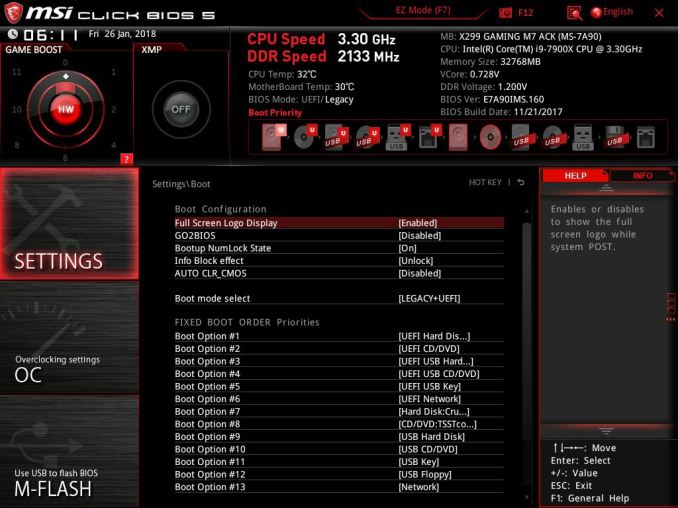 The OC section is where users will find all options for overclocking. This section has two available modes: Normal, for the base options, and Expert which expands the available options. Most overclockers can be satisfied with the normal setting, but for more granular control, Expert needs to be selected. Within this section are other subsections such as CPU feature/function control, DRAM control, and voltage options. 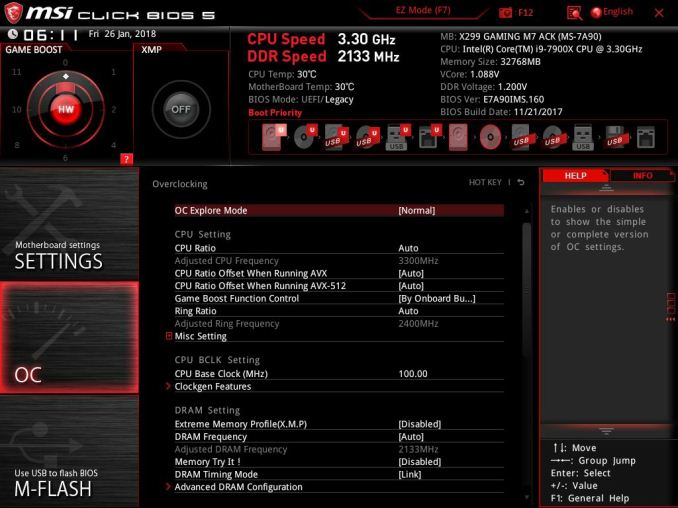 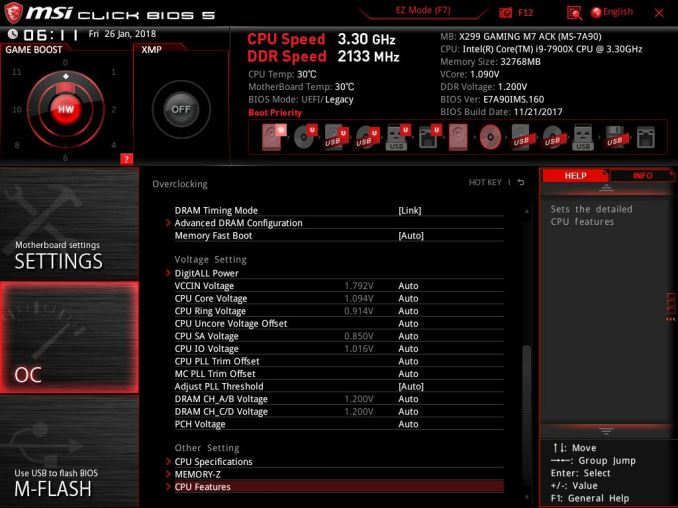 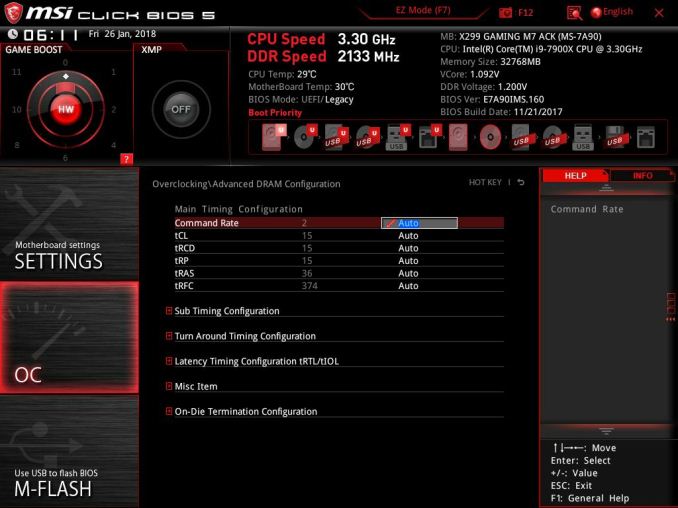 The OC Profile section is where users are able to save profiles, either to the BIOS or a USB, as well as load profiles. 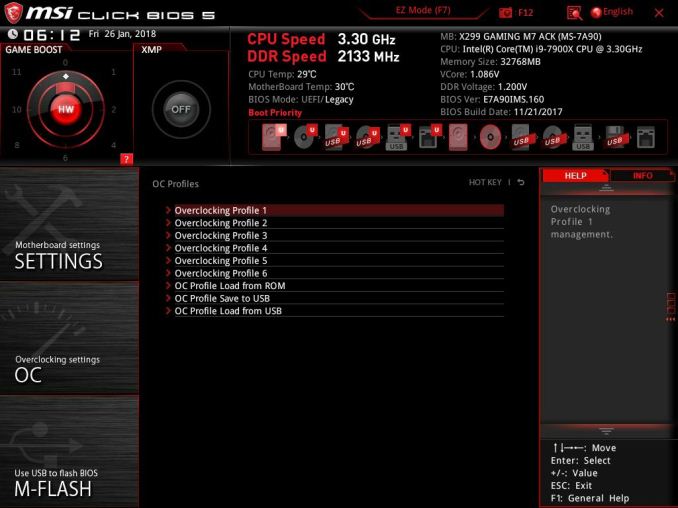 The Hardware Monitor section gives users a graphical display of the system status, from the temperatures and voltages of the CPU, to motherboard temperatures, MOSFETs info, chipset info, and M.2/PCIe temperatures. This section also displays information on the fan curves and allows users to create their own custom curve for each header. The board offers hybrid control (PWM or DC) on each of its headers. 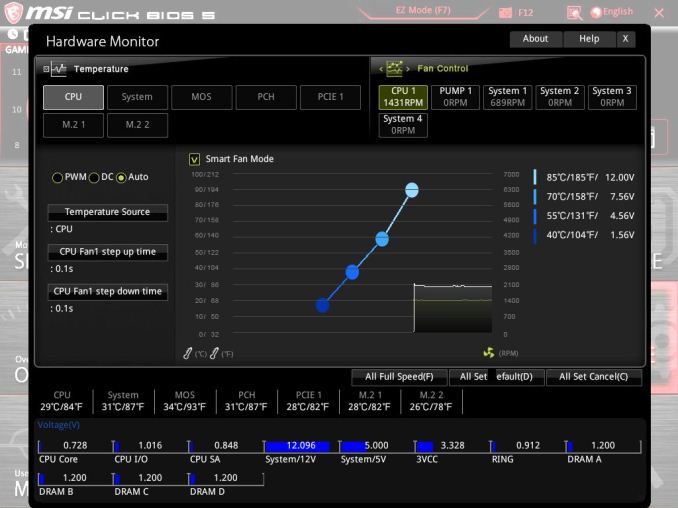 The Board Explorer section displays what it attached to the connectors that are on the board. As shown below, the populated DRAM slots, fan headers and PCIe slots are shown. For the Rear IO or SATA ports, these are sub-menus to drill down into what is installed. It can also display temperatures as noted by the thermometer icon located in several locations (VRM, CPU, above the PCI slot, chipset, etc). 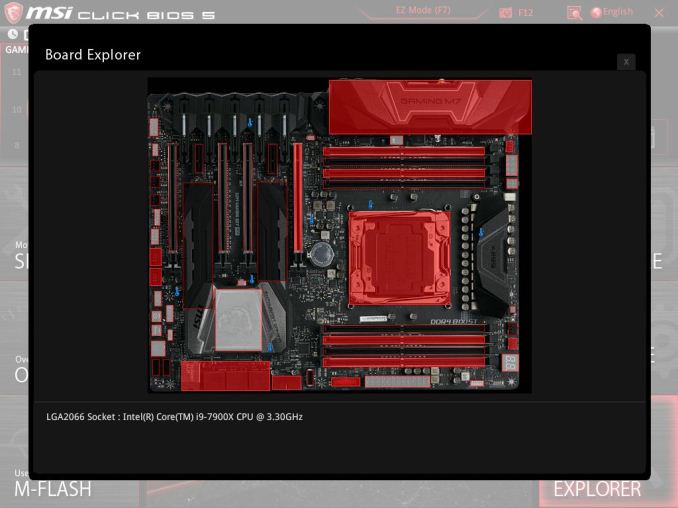 MSI includes a driver and software disk with the package. For software, it gives Live Update 6, Mystic Light, Command Center, and more. I installed the basic drivers checked off below without issue, as well as some of the utilities, avoiding free bundled anti-virus. 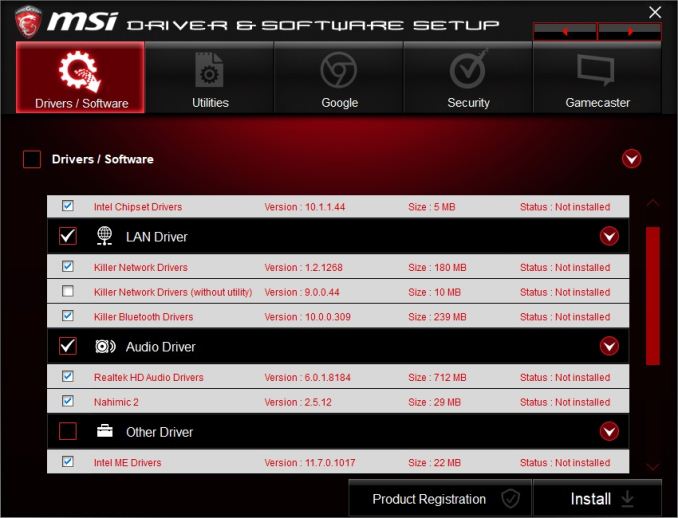 The Live Update 6 software scans the PC for installed versions of MSI applications and will go out and check for the latest versions at the MSI website. In our case, it did not find anything which needed to be updated from the driver disk. 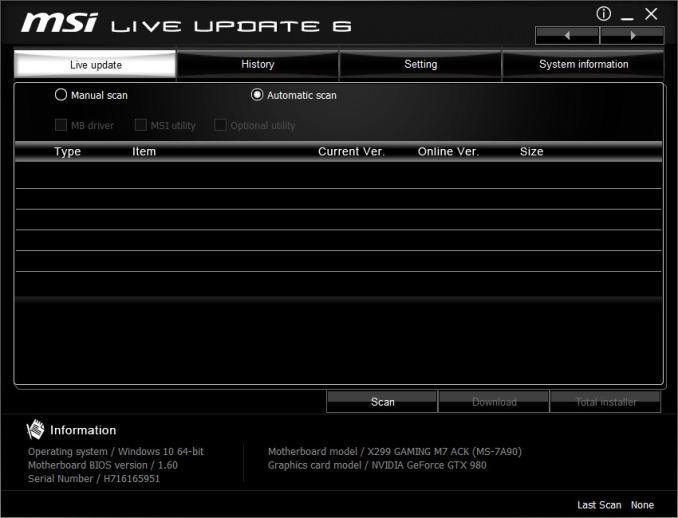 MSI has an App Manager application that it is a central location/repository for the major MSI software. When installed, the icons change to use color instead of a greyscale. All the applications I had installed launched without issue from here. I am personally not a big fan of these as its just more applications to clog up the taskbar, but, many find its consolidation of applications useful. 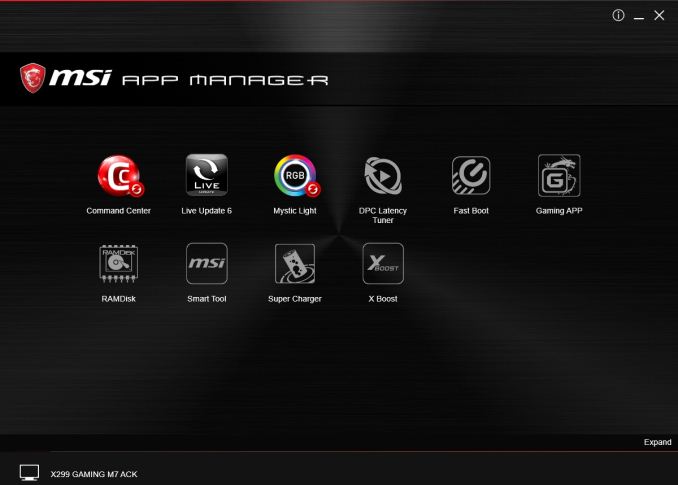 MSI's Command Center Application is a Windows-based utility to control and monitor the system. It has the ability to overclock the CPU and change voltages, has the ability to control fans, and has a Game Boost section for implementing one-touch preset overclocking. Accessing the advanced section gives users more options for voltage, DRAM timings, and fan control as well as displaying a 'board explorer' type map monitoring temperatures and fan RPMs. CC is one of the more complete Windows-based applications for this type of functionality. 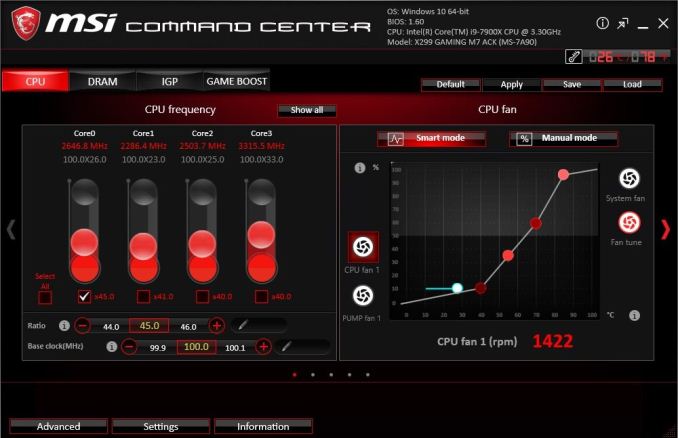 The Killer Control Center application allows monitoring and manipulating both the wired and wireless networking options on the board. The application has the ability to monitor traffic as well as offer six levels of prioritization for all applications with network traffic. It includes an optional whitelist which prioritizes a set of known applications in different ways, giving priority to latency software first (games, VOIP) and placing downloads as the lowest priority. All unknown connections get given priority 4, which is the same priority as regular web traffic. Users can also decide if certain applications go over wired or wireless, depending on the networks chosen. The KCC also has a Wi-Fi analyzer to view all the Wi-Fi signals it can reach which is helpful for selecting the least busy channels for best throughput. 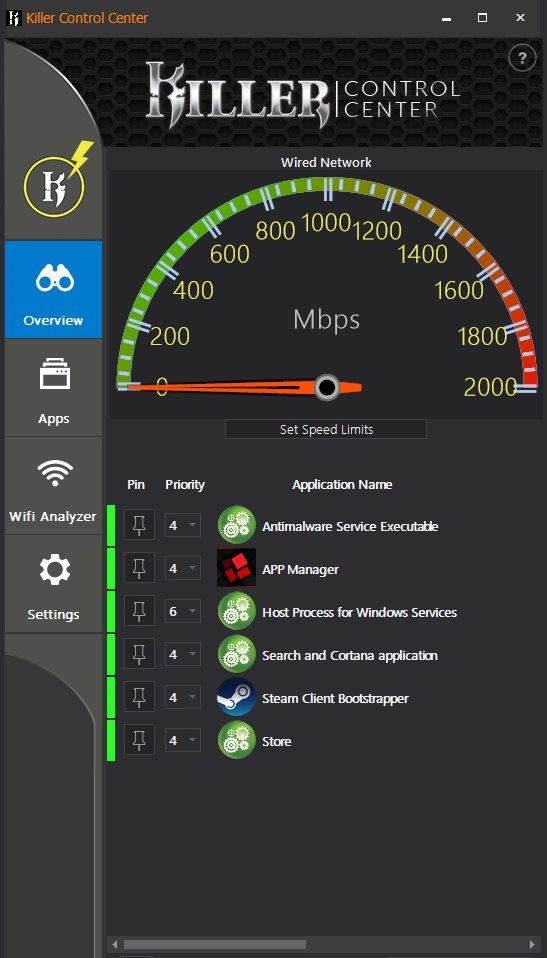 MSI's Mystic Light application controls all of the RGB LEDs on the MSI X299 Gaming M7 ACK. The application offers control over the LEDs to be synced with 15 different effects, or individually lit up. The application is also able to control any RGB LEDs attached to the board's multiple RGB headers. My only complaint about this software is how it scales with screen size, as it can fill up a 4K UHD monitor pretty easily. I wouldn't imagine a simple RGB controlling application needs to do this. 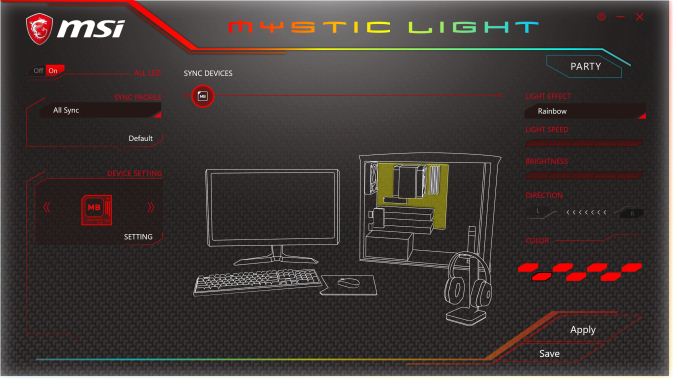 The MSI X299 Gaming M7 ACK uses dual Realtek ALC1220 codecs, and uses a custom skin on the Realtek based software which matches their Gaming lineup theme of black and red. The software functionality is no different in offering preset sound stages a graphics equalizer, as well as a visual representation of what is plugged into the back and front panels as well as SPDIF. 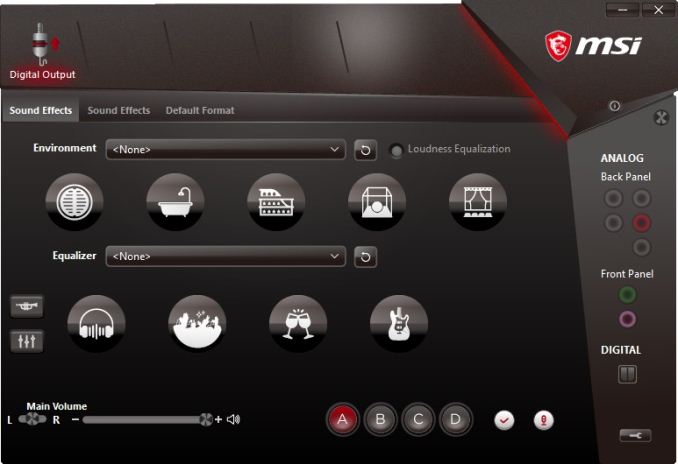 With the ALC1220 codec, MSI adds another piece of software for audio manipulation called Nahimic. The Nahimic software feels most like an extension to the Realtek software, allowing users to change multiple facets of their sound profile include bass and treble, virtual surround, loudness, and others. These sound profiles are able to be applied by different types of activities such as listening to music, watching a movie, phone calls, or gaming. It is also able to adjust inputs from the microphone and recording as well as including a sound tracker software for gaming which uses an OSD to show where the sound heard in game is coming from. 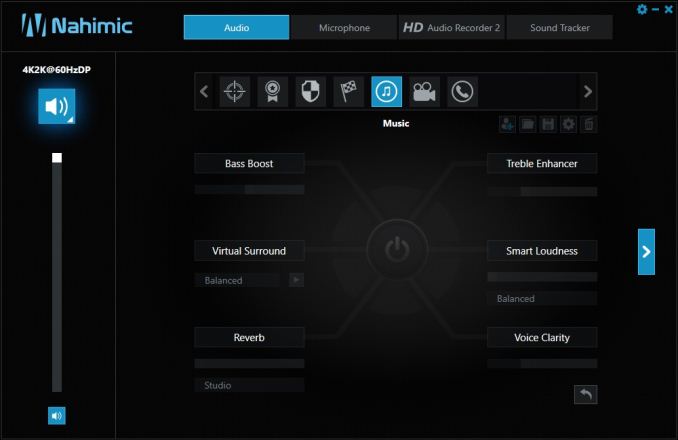