When looking at the Z370-F Gaming from ASUS we are presented with a matte black PCB, all black connectors and grey brushed aluminum heatsinks all around. There is a corner to corner motif design for some 'flair', if that's a thing.  This is a much better aesthetic than the previous ASUS board reviewed with all the ROG branding on the board and will provide a more neutral aesthetic overall. 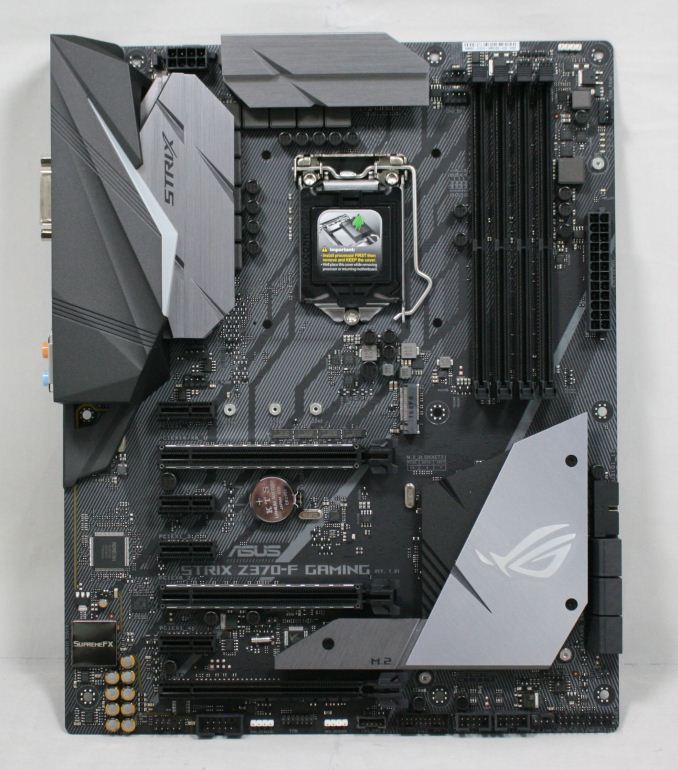 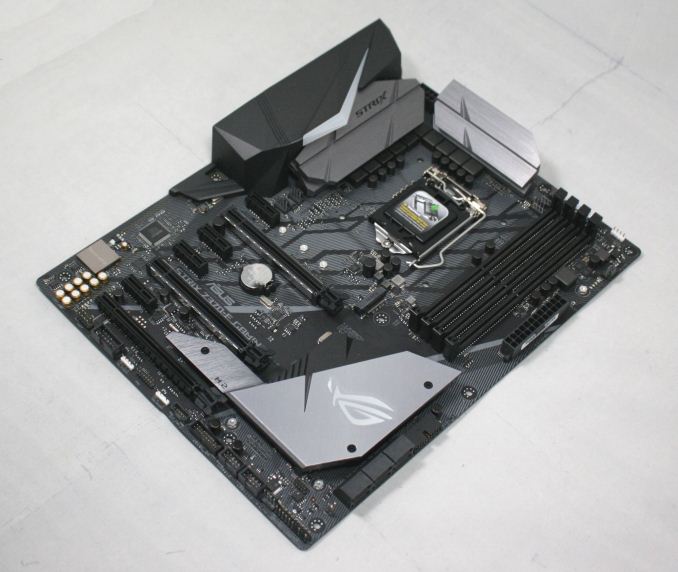 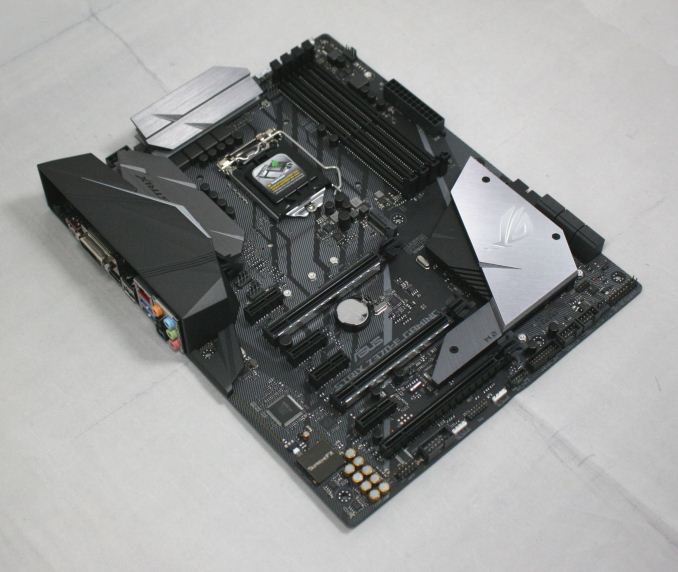 The Z370-F Gaming does include RGB LEDs for additional lighting, and some are found on the rear IO cover just above one of the power delivery heatsinks. The RGB LED shines through a piece of frosted plastic which gives the area a nice glow without being able to see the individual LEDs (when looking at it from above). The integrated lighting is controlled through the AURA software as well as any attached to the onboard RGB LED headers (2x 4-pin and one addressable RGB header).

For cooling, the board includes a total of six fan headers located in various locations on the board. In the top right corner by the DRAM slots and the edge of the board, users will find two CPU headers and a chassis fan (CPU fan supports 1A max). Just above the top PCIe x1 slot are a second chassis fan and AIO_Pump fan. Across the bottom of the board is the sixth fan header ASUS has labeled M.2 fan. There is also a 5-pin EXT fan header which supports 2 of 5 thermal sensor sources. Attached fans can be controlled through the UEFI or through AI Suite 3 and the FanExpert 4 section. 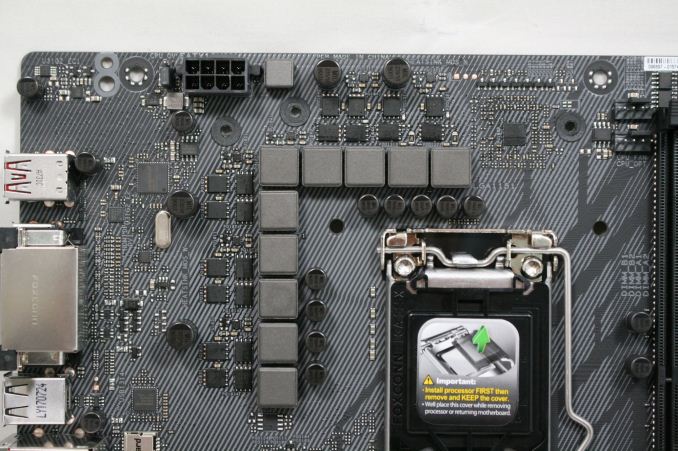 The power delivery setup used on the Z370-F Gaming uses the DIGI+ ASP1400BT controller unique to ASUS. The controller is able to handle four phases for the CPU and two for the integrated GPU. High side duties are managed by SiRA14DP (58A) MOSFETs with the low side using SiRA12DP (60A). The power delivery system has large heatsinks covering the power bits to help keep the cool under load and especially while overclocking. With this cooling, users shouldn't see any power delivery issues.

The table above displays the Z370 boards we have reviewed so far and lists the power delivery hardware including the controller, MOSFETs (both High and Low side where applicable), number of chokes, and phase doublers (if applicable).

The right side of the board has a fair amount going on with it. On the left side, we are able to see three stacks of SATA ports (totaling 6 ports) along with a horizontally oriented USB 3.0 header. Sliding over to the right we can see the four single-latch DRAM slots and just below them is the 24-pin ATX power connector. In the right corner, to the right of the mount hole, we are able to see a couple of LEDs which provide the status of key components during POST. This includes the CPU, memory modules, VGA card, and disk drives. If one of these components are causing an issue during POST, the LED will light up showing the user where the issue may be. Since the board does not have a debug display, these can help identify where the issue is quicker. 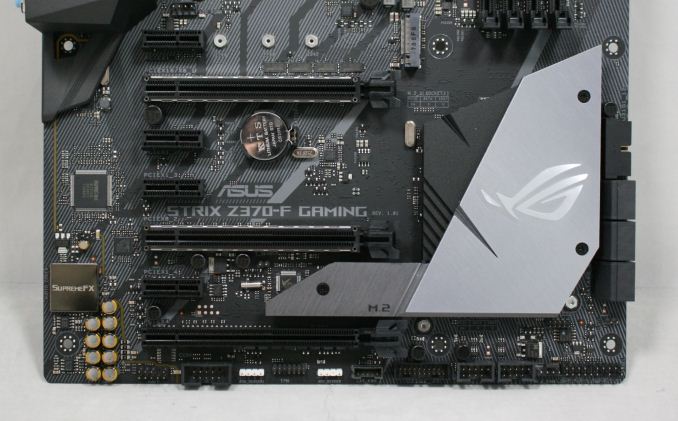 The bottom half of the board also has a lot going on, at least more than the Mini-ITX sized boards we have reviewed lately anyway. The left side holds all the audio goodies, from the S1220A Supreme FX codecs under the audio cover, to dual Op Amps capable of driving a wide range of headphones from 32-600Ω. The board uses Nichicon Japanese capacitors which ASUS claims to produce a warmer, natural sound.

In the PCIe area, we are able to see seven total PCIe slots - 3 full-length, and four x1 size slots. Two of the full-length slots, intended for video cards, are reinforced using ASUS' Safeslot for improved retention force shearing. Both of the full-length reinforced slots are connected through the CPU while the remainder are connected through the chipset. With this configuration, the board supports both Crossfire and SLI multi-GPU technologies (3-way in the case of Crossfire).

Below is a quick reference table to show how the PCIe lanes are split out for various configurations. The "@" symbol is used to show slot preference for the configuration.

The back panel IO contains modern connectivity including USB 3.1 (10 Gbps) Type-A and Type-C ports, with USB 3.0, and USB 2.0 ports rounding out USB support. The board also offers users multiple video outputs in the form of DVI-D, HDMI, and DisplayPort 1.2 ports for using the integrated video card in the processors. We can also see an audio stack with S/PDIF as well as an RJ-45 port.

The ASUS Z370-F Gaming includes more accessories than we are used to seeing, including temperature probes, zip ties, and a CPU installation tool. The more common accessories are also included, such as SATA cables, driver disk, and the manual. 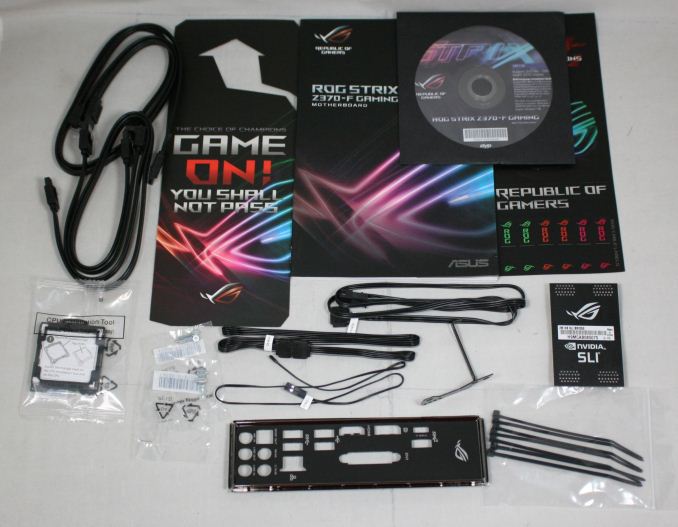