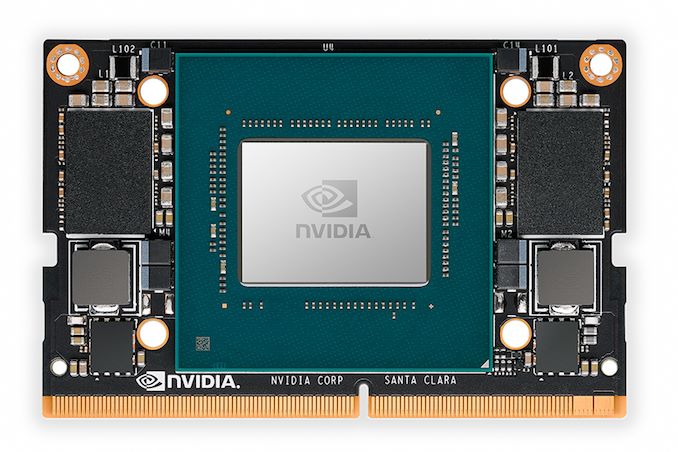 Since it was launched earlier this decade, NVIDIA’s Jetson lineup of embedded system kits remains one of the odder success stories for the company. While NVIDIA’s overall Tegra SoC plans have gone in a very different direction than first planned, they’ve seen a lot of success with their system-level Jetson kits, as customers snatch them up both as dev kits and for use in commercial systems. Now in their third generation of Jetson systems, this afternoon NVIDIA is outlining their plans to diversify the family a bit more, announcing a physically smaller and cheaper version of their flagship Jetson Xavier kit, in the form of the Jetson Xavier NX.

Based on the same Xavier SoC that’s used in the titular Jetson AGX Xavier, the Jetson Xavier NX is designed to fill what NVIDIA sees as a need for both a cheaper Xavier option, as well as one smaller than the current 100mm x 87mm board. In fact the new Nano-sized board is quite literally that: the size of the existing Jetson (TX1) Nano, which was introduced earlier this year. Keeping the same form factor and pin compatibility, the Jetson Xavier NX sports the same 45mm x 70mm dimensions, making it a bit smaller than a credit card. 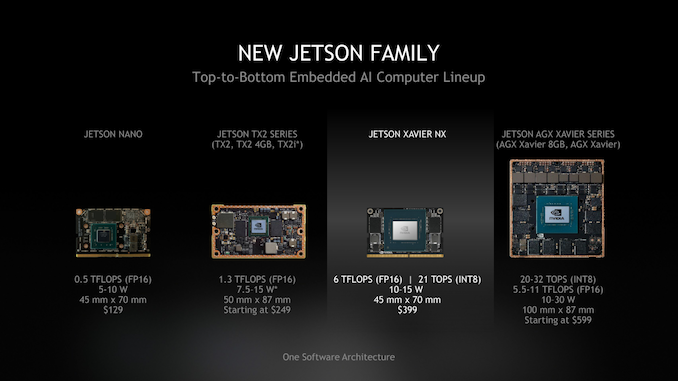 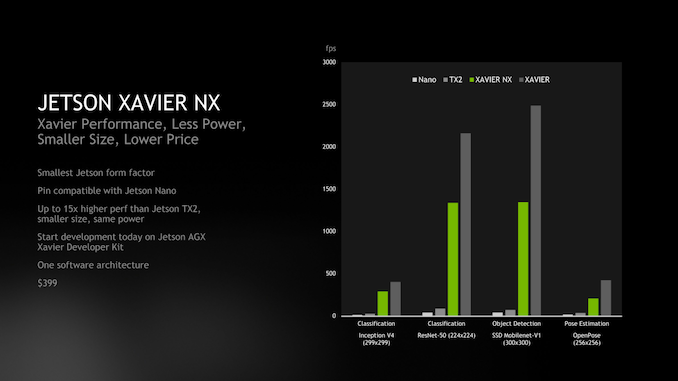 Not that Jetson Xavier NX is a wholesale replacement for Jetson AGX Xavier, however. The smaller Xavier board is taking a shave both in performance and in I/O for a mix of product segmentation, power consumption, and pin compatibility reasons. Notably, the Xavier SoC uses in the NX loses out on 2 CPU cores, 2 GPU SMs, and perhaps most important to heavy inference users, half of the chip’s memory bandwidth. As a result the Jetson Xavier NX should still be significantly ahead of Jetson TX1/TX2, but it will definitely trail the full-fledged Jetson AGX Xavier.

All told, for inference applications NVIDIA is touting 21 TOPS of performance at the card’s full power profile of 15 Watts. Alternatively, at 10 Watts – which happens to be the max power state for Jetson Nano – this drops down to 14 TOPS as clockspeeds are reduced and two more CPU cores are shut off.

Otherwise, the Jetson Xavier NX is designed to slot right in with the rest of the Jetson family, as well as NVIDIA’s hardware and software ecosystem. The embedded system board is being positioned purely for use in high-volume production systems, and accordingly, NVIDIA won’t be putting together a developer kit version of the NX. Since the current Jetson AGX Xavier will be sticking around, it will fill that role, and NVIDIA is offering software patches for developers who need to specifically test against Jetson Xavier NX performance levels.

The Jetson Xavier NX will be shipping from NVIDIA in March of 2020, with NVIDIA pricing the board at $399. 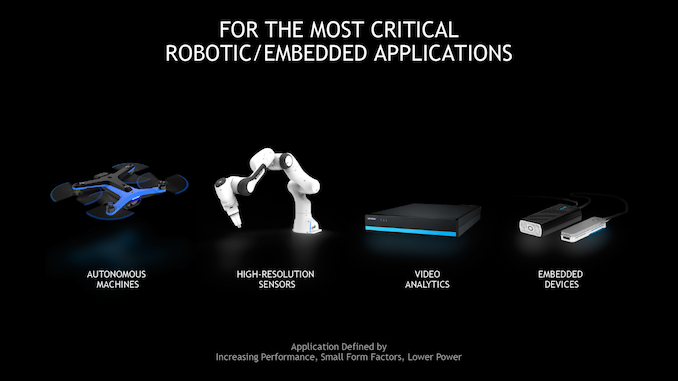