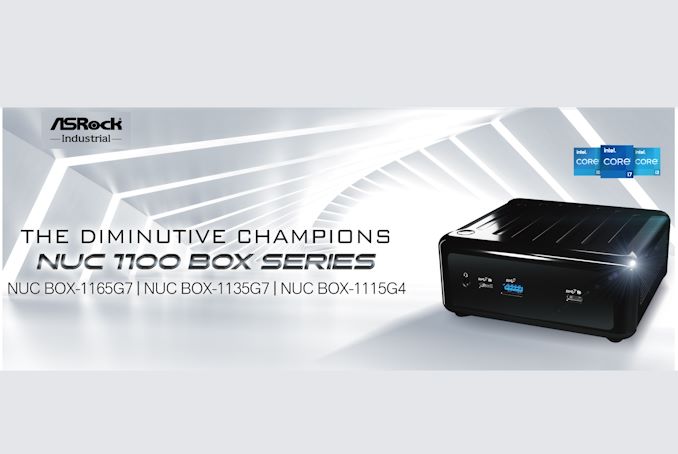 Intel's introduction of the Tiger Lake U-series processors with support for a range of TDPs up to 28W has resulted in vendors launching a number of interesting systems with a twist to the original NUC's 100mm x 100mm ultra-compact form-factor (UCFF). Notable among these have been the GIGABYTE's BRIX PRO (3.5" SBC form-factor), and ASRock Industrial's STX-1500 mini-STX board, with the latter adopting the embedded versions of the Tiger Lake-U processors. ASRock Industrial also happens to be one of the first to adopt the Tiger Lake-U series for traditional UCFF systems with the launch of their NUC 1100 BOX series.

Intel's Tiger Lake-based NUCs (Panther Canyon and Phantom Canyon) are an open secret in tech circles, but are yet to be officially announced. ASRock Industrial's Tiger Lake NUCs such as the NUC BOX-1165G7 have also been hinted at in Intel's marketplace - a retail follow-up to the embedded market-focused iBOX 1100 and NUC 1100 solutions. Today's announcement makes the Tiger Lake NUCs from ASRock Industrial official. The company is launching three models in this series - NUC BOX-1165G7, NUC BOX-1135G7, and NUC BOX-1115G4. The specifications are summarized in the table below.

The striking aspect of the NUC 1100 BOX-series chassis is the similarity to the 4X4 BOX-4000U series.

According to the products' datasheet, ASRock Industrial plans to get the two Type-C ports in the front panel certified for USB4. Since the certification plan is still pending, they are being advertised as USB 3.2 Gen 2 for now. They also believe that Thunderbolt 3 devices can be used in the front Type-C ports (since Intel claims four USB4 / Thunderbolt 4 ports on Tiger Lake) - that would be interesting to test out, given the logo on the chassis only indicates SuperSpeed 10Gbps with DP-Alt Mode support.

The key updates compared to the existing NUCs from various vendors (based on Comet Lake-U) are the support for four simultaneous 4Kp60 displays along with the 2.5 GbE wired LAN interface. The performance advantages provided by the 10nm Tiger Lake with its new microarchitecture may probably help the NUC BOX-1100 series get the edge over the 4X4 BOX-4000U series (based on the Renoir APUs) in single-threaded workloads. On the multi-threaded side and GPU-intensive workloads, it is shaping up to be an interesting tussle - one we hope to analyze in more detail in our hands-on review.

Since the unit targets the embedded market also, it has the usual bells and whistles including an integrated watchdog timer and an on-board TPM. Pricing is slated to be announced towards the end of October 2020.