This week at the annual Supercomputing HPC show, we’re going to see a number of high-profile enterprise announcements across a wide array of industries that support server and high-performance computing environments. One such announcement is from BittWare, which is announcing its new IA-840F add-in card built upon Intel’s latest FPGA product line. The IA-840F add-in card is a PCIe 4.0 x16 enabled device for next-generation datacenter, networking, and edge compute workloads, supporting hardened dual QSPF-DD (4x100G) connectivity.

The goal of adding an FPGA with networking connectivity to any enterprise environment has a number of benefits, such as offloaded workloads, accelerated workloads, and a configurable FPGA environment. This enables customers to quickly adapt to their workload requirements by implementing a reconfigured FPGA through software. When networking is bundled into the mix, additional SmartNIC features could come into play, either adapting outgoing traffic based on rules, or processing incoming data without even touching the CPU in play. The push towards enhanced ML-accelerated and analytical network traffic flows also benefit from FPGA and reconfigurable acceleration.

At the heart of the IA-840F is one of Intel’s Agilex FPGAs. This is a rarety – we rarely hear about where Intel’s Agilex hardware is being used, over a year since the products were announced into the market. Agilex is expected to come in three flavors, Agilex-F, Agilex-I, and Agilex-M, with the capabilities and performance rising through those offerings, and Agilex-F was the first one off the line. 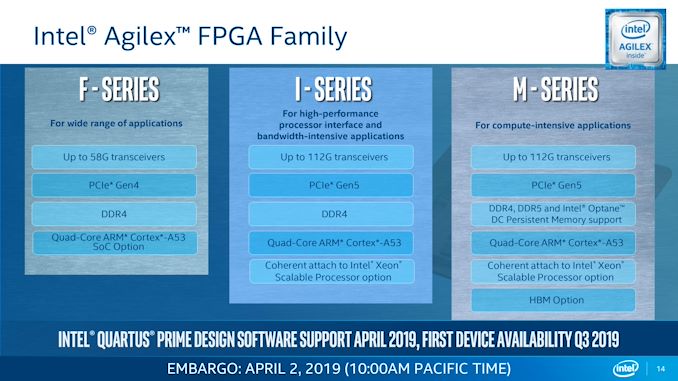 I was going to say that the IA-840F seems to be using Agilex-I, as Intel’s Patrick Dorsey provided a quote for Bittware and mentioned 112G trancievers, however that seems to be a general quote about the family of Agilex FPGAs, not this specific product. 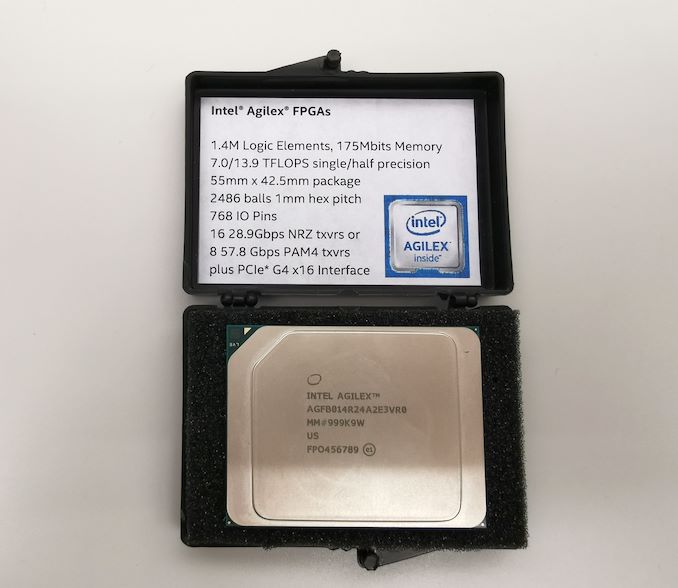 That last bit is also an intriguing element to the new Bittware product: support for the oneAPI unified programming environment. OneAPI is Intel’s grand vision for a singular software platform for use in CPU, GPU, FPGA, and AI hardware – while the upper layer is built on a SYCL variant of Data Parallel C++ (DPC++), the libraries underneath will be optimized for the hardware along with a hardware abstraction layer from the programmer. The goals are admirable, and so far we’ve heard about oneAPI used in the context of GPUs as it relates to Intel’s Xe graphics with our recent interview of Intel’s Lisa Pearce, but we’ve not heard much on the FPGA side. With Bittware making this announcement, it would appear that the FPGA angle is certainly well on its way as well. Alongside oneAPI support, the IA-840F comes with a HDL developer toolkit, such as PCIe drivers, application example designs, and a board management controller. Based on the image of the IA-840F, it looks like that the unit has three DDR memory slots, likely for different accelerators on the FPGA. 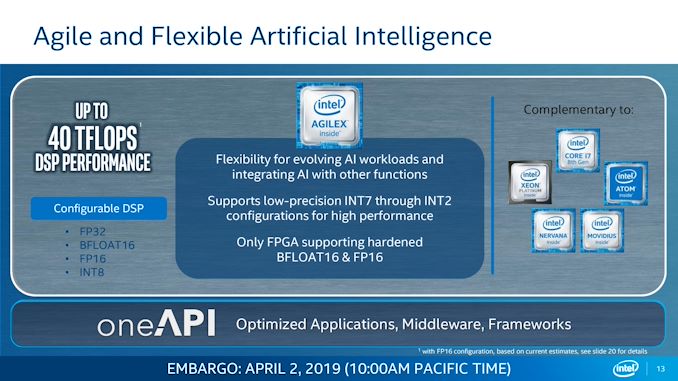 Customers interested in the IA-840F will have a choice of thermal cooling options (passive, active, liquid), and shipments are expected to begin in Q2 2021. Initial public offerings will be made through Dell or HPE servers from the BittWare TeraBox range.