The Intel B560 Motherboard Overview: 30+ Budget Models Starting from $75

A lot of Intel B560 models are micro-ATX sized, which is a stark contrast compared with Z590, where there are barely any. ASRock does have a couple of ATX sized B560 models including the B560 Pro4/ac and B560 Pro4, with the only difference between both models is the ac version includes an Intel Wi-Fi 5 CNVi. Focusing on the design, the B560M Pro4 pairing includes a grey and black patterned PCB, with silver heatsinks and a small section of integrated RGB LED's located in the bottom right-hand corner. 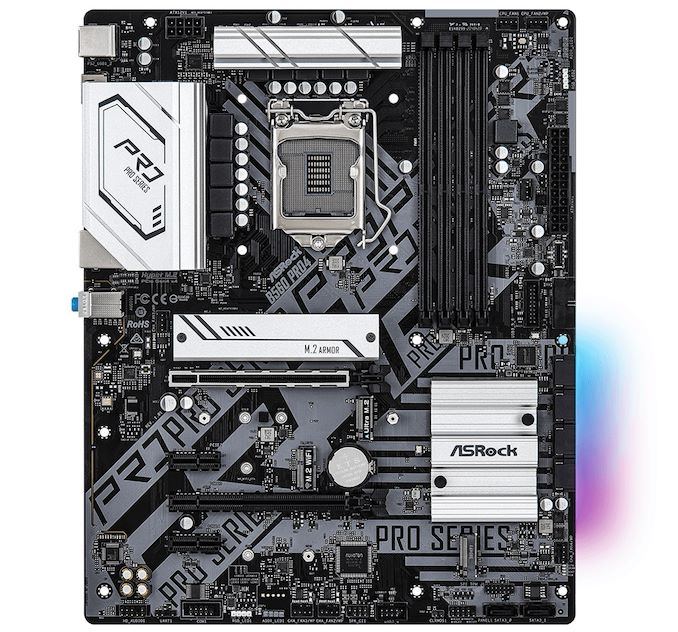 Located towards the center of the board are two full-length PCIe slots and two PCIe 3.0 x1 slots. The top full-length slot operates at PCIe 4.0 x16, while the second slot is electronically locked to PCIe 3.0 x4. ASRock includes four memory slots with support for up to DDR4-4800, with a maximum combined capacity of 128 GB. For storage, both the B560M Pro4/ac and B560M Pro4 include threeM.2 slots, with the top slot operating at PCIe 4.0 x4, one with support for PCIe 3.0 x4/SATA, and the third including support for PCIe 3.0 x2/SATA. The third M.2 slot shares bandwidth with one of the board's six SATA ports, which includes support for RAID 0, 1, 5, and 10 arrays.

On the rear panel is four USB 3.2 G1 Type-A and two USB 2.0 ports, with three 3.5 mm audio jacks powered by a Realtek ALC897 HD audio codec. Both models include an Intel I219-V Gigabit Ethernet controller, while the B560M Pro4/ac includes an unspecified Intel Wi-Fi 5 CNVi. Finishing off the rear panel is a pair of video outputs including one HDMI and one DisplayPort, as well as a PS/2 combo port for legacy peripherals.

At the time of writing, ASRock hasn't provided pricing information for the B560M Pro4/ac, although we do know the non-Wi-Fi variant, the B560M Pro4 has an MSRP of $110.