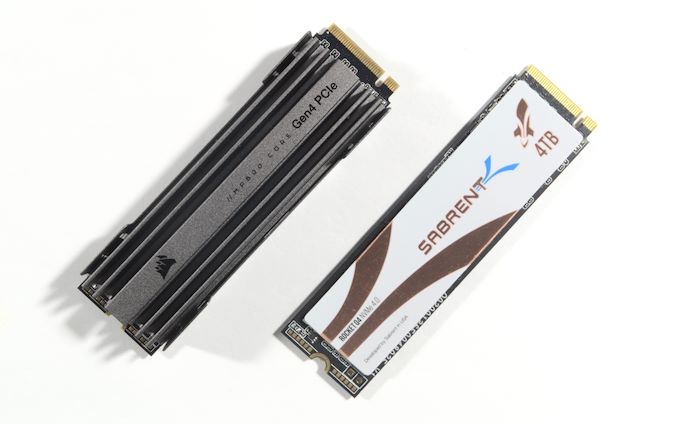 Three years ago, a new variant of flash memory hit the SSD market which stores four bits of data in each memory cell called QLC. This new QLC NAND flash memory offered 33% better bit density compared to three bits per cell with mainstream TLC NAND. QLC initially arrived as a low-end alternative that provides better density and price, but the trade-off has been worse performance (and endurance). So far the use of QLC NAND has always meant that any drive with QLC belongs in an entry-level market segment, competing against the cheaper TLC NAND SSDs that cut corners on other components. But as more SSD vendors adopt QLC NAND in a wider range of products, some are starting to challenge the assumption that QLC is only for low-quality bargain products.

Sabrent and Corsair are two very familiar brands that market SSDs based on reference designs from SSD controller vendor Phison. Both brands have followed Phison's lead in using QLC NAND for M.2 NVMe SSDs. The latest and greatest QLC solution from Phison uses its E16 SSD controller, which was the first consumer SSD controller to support PCIe Gen4. The Sabrent Rocket Q4 and Corsair MP600 CORE we are reviewing today are part of the first generation of PCIe 4 SSDs to use QLC NAND: an almost paradoxical combination of a high-end PCIe 4.0 connectivity with low-end QLC NAND. The question to answer is whether if QLC NAND is moving up market into mainstream or high-end products, or is it just PCIe 4.0 support now trickling down to low-end higher-capacity drives? This is what we set to find out with this review.

Many aspects of the Corsair MP600 CORE's spec sheet look pretty high-end. The drive comes with basically the same heatsink as Corsair's high-end TLC drives, albeit in a slightly different color.

Peak performance ratings are close to 5GB/s for reads and 4GB/s of writes, making PCIe 4.0 a necessity to hit those numbers.

The five-year warranty and pricing around $0.15/GB are also indicative that the MP600 CORE isn't exactly entry-level. But on the other hand, the write endurance rating of just over 0.1 drive writes per day is much lower than the usual 0.3 DWPD expected from mainstream consumer SSDs. There are also some unimpressive performance metrics, especially for the smallest 1TB capacity.

Sabrent's published specs for their Rocket Q4 are quite a bit less detailed, but follow the same general pattern:

The Phison E16 controller was originally a very successful bid to be first on the market with a controller supporting PCIe 4.0: Phison ended up having a monopoly on PCIe 4.0 SSDs for over a year, and even some SSD brands that don't routinely use Phison controllers brought out new flagship models based on this controller. But now the successor E18 controller is shipping, as well as competing top of the line PCIe 4.0 drives from both Samsung and Western Digital with their own custom controllers. That leaves the E16 as an outdated part, with performance that is no longer sufficient for a flagship model, and power consumption that is quite high. The E16 is manufactured on 28nm whereas all the other PCIe 4.0 SSD controllers are build on more advanced nodes like 12nm. This means that the E16 is ripe for that cheaper PCIe 4.0 market, which makes sense when adding in some high density QLC. 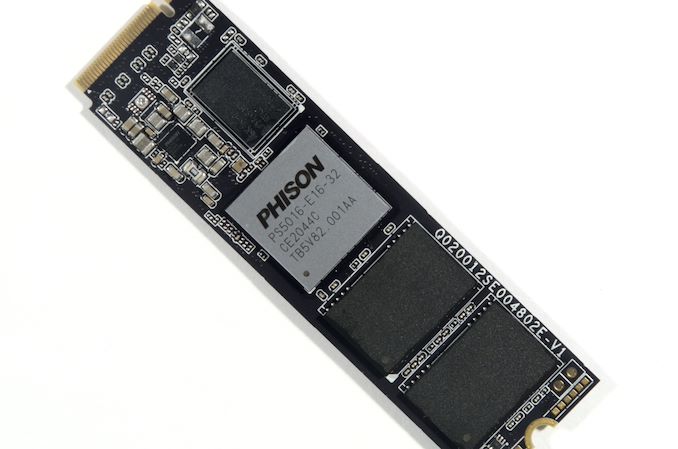 All that being said, the E16 controller is still a step up from Phison's very successful E12 PCIe 3.0 SSD controller. These PCIe 4.0 controllers are backwards compatible with PCIe 3.0, so even in a system that only supports PCIe 3.0, a drive based on the Phison E16 (like the ones we are testing today) is a bit faster than the E12.

It doesn't currently make sense to pair QLC NAND with the expensive flagship E18 controller, but the E16 has found a second life as Phison's more affordable and mature Gen4 controller when paired with QLC. One consequence of replacing E12+QLC drives with E16+QLC designs is that the E16 controller is physically larger than the compact E12S version's package, and that size difference means the 8TB models cannot yet move up to the E16 controller due to lack of space on a M.2 2280 PCB. That's a shame, because the best showings for QLC NVMe SSDs have been at the largest capacities where huge SLC caches and the highest possible degree of parallelism allow drives to mostly overcome the worst downsides of QLC NAND.

In this review, we're comparing the 4TB Sabrent Rocket Q4 and 2TB Corsair MP600 CORE against a variety of other SSDs, from low-end QLC SATA SSDs to high-end gen4 drives with TLC NAND. Particularly interesting points of comparison include: