Our maximum speed testing is performed with both the fans and the pump of the kit powered via a 12V DC source. This input voltage should have the pump and fans matching the speed ratings of the manufacturer. The Pure Wings fans rotate a tiny bit faster than their specifications suggest, with our tachometer reading 1610 RPM. There was no difference between the two fans, suggesting great quality control – at least amongst the few samples that we tested. 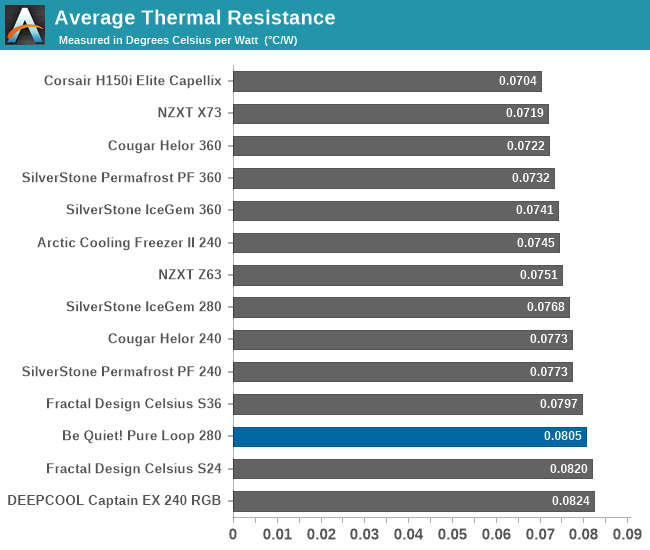 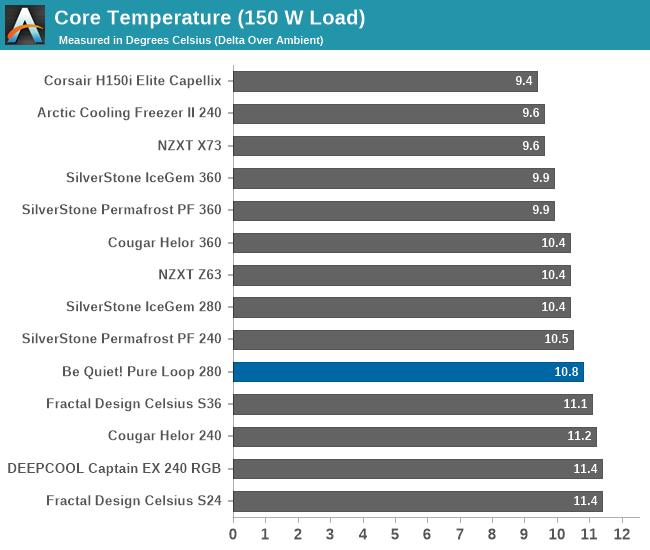 The thermal performance charts show that the 280 mm version of the Be Quiet! Pure Loop performs on par with other similarly-sized solutions, without any significant surprises. The average thermal resistance of 0.0805 °C/W is good for a cooler with two 140 mm fans, matching the performance of most 280 mm coolers that we have tested to this date. 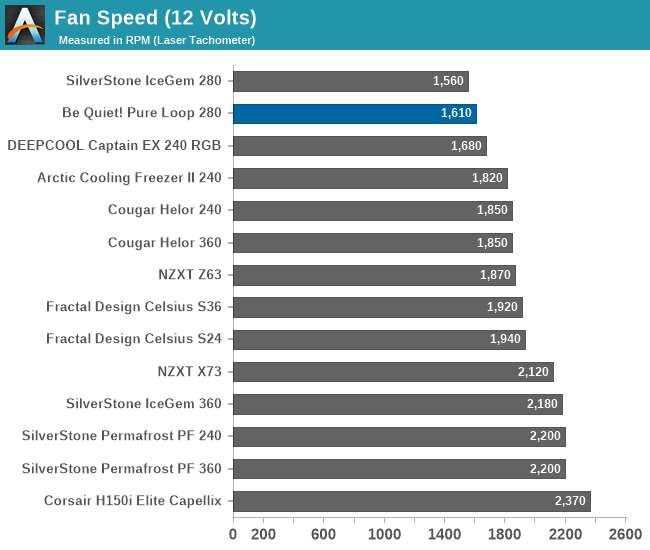 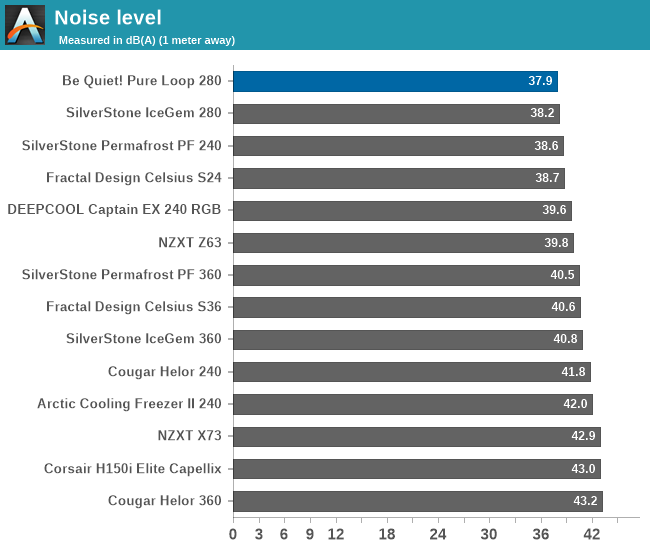 Although the Pure Loop 280 mm's thermals do not outperform most of the competition, it has a serious performance advantage comes to acoustics. With a reading of 37.9 dB(A), the 280 mm version of the Pure Loop is the quietest two-fan AIO cooler that we have ever tested. Still, 37.9 dB(A) is not an inaudible figure, so for users after especially quiet computing, they will probably not want to use their cooler at maximum speed for extended periods of time.

Using a PWM voltage regulator, we reduced the speed of the fans manually down to half their rated speed, which is 800 RPM for the Pure Wings 140 mm fans. The pump was also connected to the same power source, functioning properly at this low-speed setting. 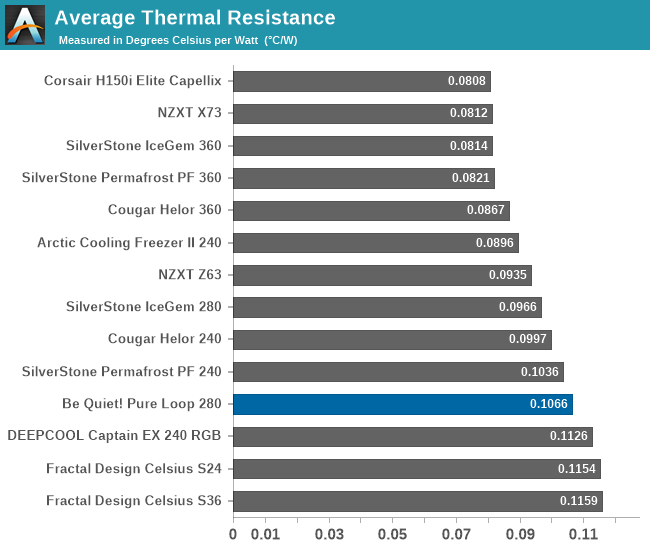 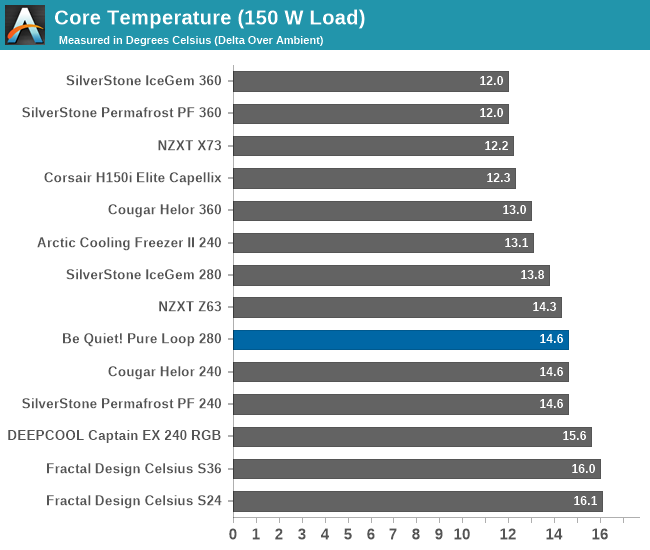 There are no significant changes in this test, with the Be Quiet! Pure Loop offering thermal performance analogous to that of other similar AIO coolers. It falls a little behind only when the load is very high, which harms the average thermal performance of the cooler a little, resulting in an average thermal permittance of 0.1066 °C/W. However, a closer look at the charts reveals that the Pure Loop performs admirably well when the thermal load is below 150 Watts under these operating conditions. 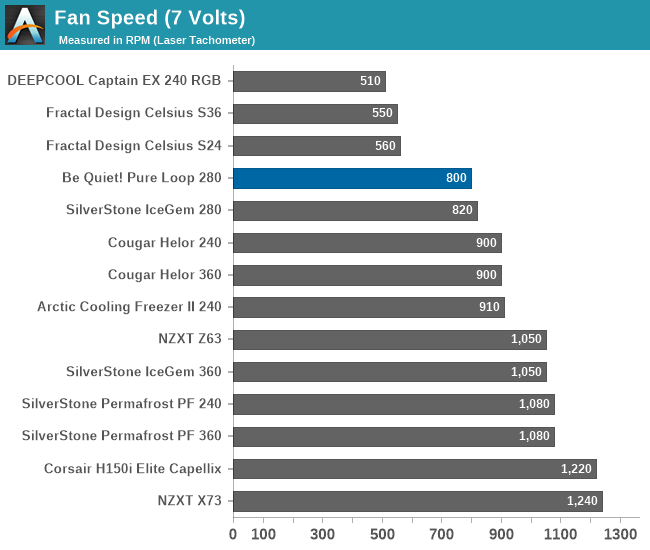 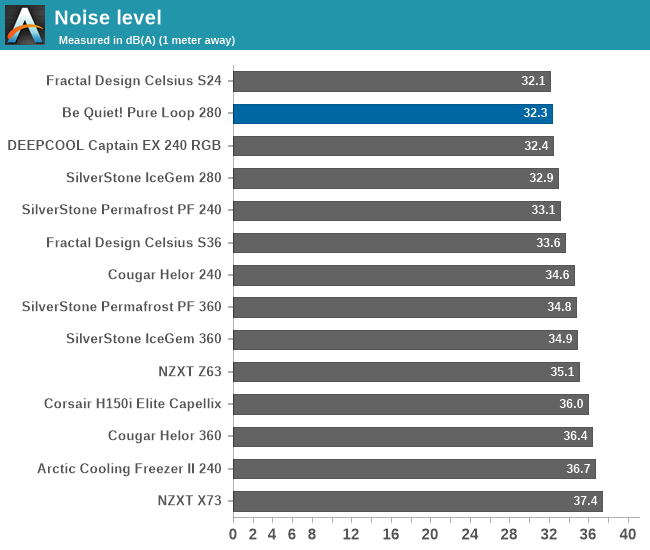 Much like before, the amount of noise coming off of the Be Quiet! Pure Loop is exceptionally low. With a noise output of 32.3 dB(A), the 280 mm version of the Pure Loop lands a better acoustic performance than that of most AIO coolers – even those with a single cooling fan. Even in the quiet October night, it is nearly dead silent under these operating conditions, audible only when someone gets very close to the cooler and in a completely quiet room. 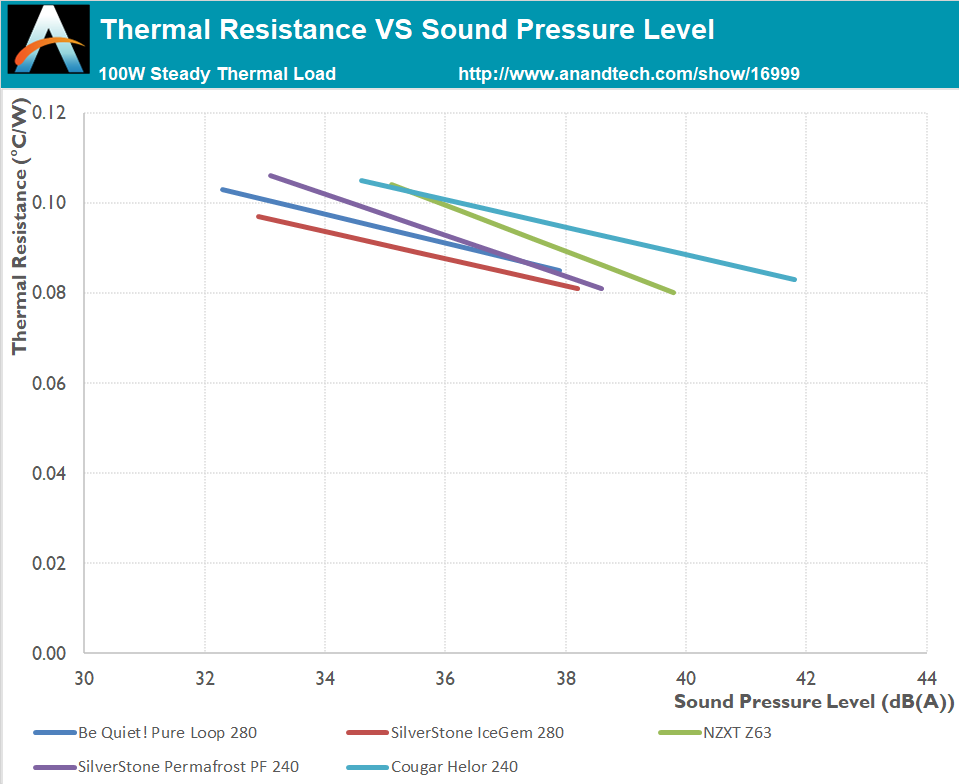 The graph reveals that the overall performance of the Be Quiet! Pure Loop 280 mm cooler falls between that of other similarly sized coolers. It generally is a little worse than the SilverStone Icegem 280 but a little better than the NZXT Z63 – a major win for Be Quiet!, considering the retail price of their cooler. However, from the graph, we can also see that the Be Quiet! Pure Loop 280 cannot reach very low thermal resistance figures regardless of its operating conditions, suggesting that it might not be an ideal solution for systems that may face extremely high thermal loads, even if only temporarily.