The Internet today is far more functional than it ever was and we’re finally at the point where being able to access the net in places like your living room, bathroom or kitchen is actually pretty useful. Recipes are no longer stored in cookbooks, they are in emails or websites. There’s a website or forum for virtually everything, not to mention the utility of sites like Wikipedia and imdb.

The problem is that a kitchen PC that could be used to check emails, look up recipes or chat with someone while cooking wasn’t really feasible when decent PCs would set you back at least $1500. As PC prices fell however, the possibility of putting a PC in nearly every room of your house increased tremendously. We’ve already established that there’s utility in such a PC-filled household, but what was left is someone to provide the hardware to make it happen.

When the One Laptop Per Child (OLPC) project was started it didn’t take long before regular computer users took notice and also wanted access to a $100 - $200 PC. It wasn’t just the end users that realized there was a need for such a machine, some of the manufacturers did too.

Before the release of the ASUS Eee PC I had dinner with ASUS’ CEO, Jonney Shih and we began talking about what was necessary to build a truly lightweight, yet functional PC. Jonney isn't your typical CEO, he's still quite an engineer at heart and enjoys discussing everything from market direction to the microprocessor architectures necessary to make that direction happen. The conversation started about the OLPC project but quickly lead to what it would take to build such a thing for the mainstream consumer market. We discussed what was possible, but little did I realize that ASUS had already begun working on such a thing.

The Eee PC was ASUS’ first attempt at a cheap machine for the masses, unfortunately as a notebook it’s a tough sell for most. The keyboard is cramped and the screen is too small to be productive on. People either loved or hated the Eee PC, but the system generated enough interest and was selling well enough that ASUS went ahead with plans to build a desktop equivalent.

Since they called the notebook the Eee PC, the desktop had to have a different name and thus it was called the Eee Box. 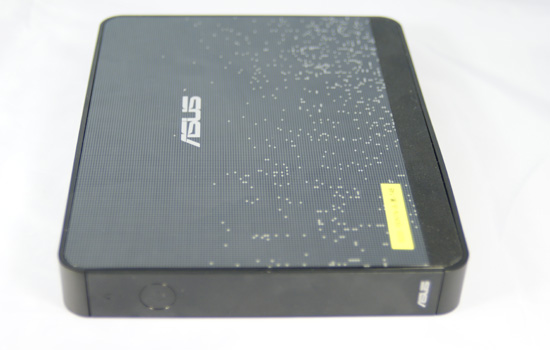 The Eee Box is effectively a headless notebook with no keyboard/mouse. In fact, the new version of the Eee PC features the exact same hardware configuration as the Eee Box - just in notebook form. Using notebook components in a “desktop” PC is nothing new, Apple does it all the time with the majority of its machines. The iMac uses a mobile CPU, as does the Apple TV, despite neither one being a notebook.

Stylistically, ASUS did a tremendous job with the Eee Box. The system we have here is an early prototype, the final version will be available with a solid white or black finish (the random pixel pattern on our system won’t make it to production). The machine is extremely sleek measuring 17.7 cm x 22.1 cm x 2.7 cm (6.97" x 8.7" x 1.06").

Without a keyboard or display to complain about and an even lower price tag ($269 or $299 depending on configuration), we set off to see if the Eee Box would have more universal appeal than the Eee PC.

There have been rumors a plenty about the standard configurations that the Eee Box would be available in and we’re finally able to give you the exact specs of the three North American models:

The base Eee Box configuration will retail for $269 and feature a 80GB SATA HDD, 1GB of memory and ship with Linux. 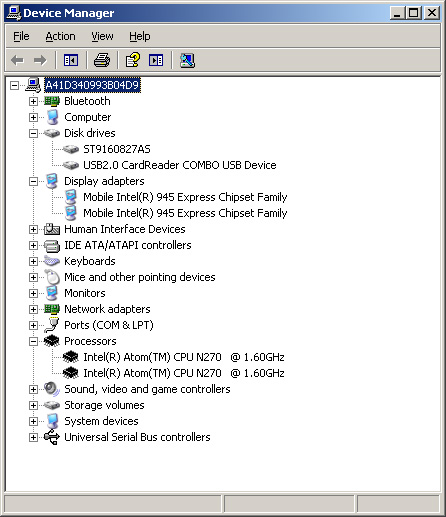 The same configuration with Windows XP will run you $299, or for the same amount of money you can purchase a 160GB/2GB system also with Linux. Microsoft won't allow PCs to be sold with > 80GB HDDs preloaded with Windows XP and thus the top end configuration is only available with Linux. Given our experience with the Eee Box under Vista vs. XP (which we'll get to shortly), we think that this is the perfect example of Microsoft dropping the ball and easily losing ground to open source solutions here.

All three machines will ship with the same Intel Atom processor running at 1.60GHz on ASUS’ own 945G based motherboard.

Availability is planned for July in North America although machines will first be available in Asia before then.