HP Takes on Apple with the New Voodoo

Microsoft's answer to any present day complaints from the major OEMs about Vista is to wait for Windows 7, but by now these manufacturers have heard this before. After all, when the OEMs first started to feel the heat from Apple and OS X, Microsoft said to wait for Vista.

When the major players first started asking me what they should be doing from a design standpoint I kept pointing them to Apple. Apple had the blueprints to successful product design available for purchase; anyone at Dell, HP or Gateway could easily pickup a MacBook and figure out a way to make something at least remotely competitive. The problem that plagues the Dells of the world however is that they don't control the software stack the way Apple does, they are still at Microsoft's mercy.

These PC OEMs could either wait for Microsoft to deliver with Windows 7 and hope that it will be enough to compete with Apple, or begin to try and solve the problem themselves. ASUS is actually a great example of where these OEMs are headed; while the Eee PC and Eee Box are available with Windows XP, Linux is also offered at a lower price point. Going one step further, before you ever boot into Windows on many ASUS motherboards you have the option of launching Splashtop for quicker access to IM, the web or Skype. While these are mostly unpolished attempts at freeing OEMs from being Microsoft dependent, this is just a starting point. I'm not suggesting that PCs in the future will be completely devoid of Microsoft software, there will simply be another option.

HP noticed this same Microsoft dependency issue, just like the rest of the PC OEMs and over the coming years you're going to see companies like HP and Dell become more like Apple, offering systems as complete packages of hardware and software solutions. We'll see broader adoption of Linux and open source software and finally some out of the box thinking.

HP held an event last month in San Francisco to demonstrate a myriad of new products, some of which are clear indications of this new Apple-like focus. 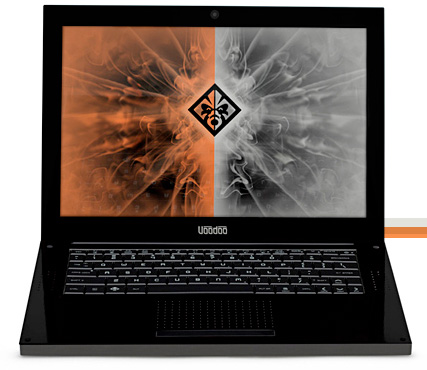 It's the new Voodoo

Many were worried that after the acquisition, HP would simply corporatize Voodoo and the brand would be lost forever. If anything, Voodoo has had more of an impact on HP than the opposite. While we still get the impression that Voodoo must fight to continue to operate the way it wants to (which is to be expected in any large corporation), so far the results aren't anything to complain about.

Going forward, the HP/Voodoo relationship is going to work as follows:

Gaming PCs will be built by HP under the brand "HP with Voodoo DNA". The first of these machines was the Blackbird 002 and I'm told that we can expect much more with the Voodoo DNA brand in the coming months and years. One eventual goal being to bring some of the Blackbird experience down to much more reasonable price points.

The Voodoo brand will stop servicing gamers specifically and turn into much more of a lifestyle brand. The focus of Voodoo will be building the sort of out of the box designs that we commonly look to Apple for. The fact that the most innovative PC maker is Apple spells trouble for the Dells and HPs of the world; Voodoo is attempting to change that, at least a little.

The first products out of the new Voodoo are the Envy 133 and the new Omen.