When we wrote our Windows Vista Performance Guide, we were left wondering about Microsoft’s ability to sell Vista to a community of users well entrenched with Windows XP

Among those that won't become switchers, Microsoft's own worst enemy is itself, as it needs to prove that Vista is a worthwhile upgrade to XP when XP is already so refined. For many users in the consumer space, Vista is simply a version of Windows where (to borrow a quote from Field of Dreams) "If you build it, they will come." These people will get Vista on their new computers and they'll like it because it is good, but having never had the chance to decide if they didn't want it.

Now two and a quarter years later we can see the outcome of that. It’s not favorable to Microsoft.

While Vista’s adoption has not been a failure, it hasn’t necessarily been a success story either. Microsoft’s own worst enemy was XP, and the users complacent with it have been in no big rush to upgrade. The primary vehicle for moving Vista has been new computers, and even that has taken a hit in the kneecaps with the sudden rise of netbooks, which fit poorly with an OS that was made for newer, faster computers.

Further complicating matters is that the quality of Vista wasn’t particularly stellar at launch. We’ve already covered this with our Vista SP1 article, so we won’t completely rehash this, but specific performance problems such as file copies (local and networked) and Vista’s hunger for virtual address space quickly made themselves evident. Netbooks drove this point home even harder –Vista doesn’t do so well with so little RAM.

Finally, Apple deserves a great deal of credit here for driving the stake into the public opinion of Vista. The extremely popular Get a Mac campaign took the dissent from above and managed to amplify it and sew it into the public at large. Apple made it popular to hate Vista, and Microsoft did too little too late on the marketing front to counter that. Never underestimate the power of marketing – many people can tell you they don’t like Vista, few can tell you why. That’s marketing.

Even though many of the technical problems were fixed before or at the launch of Vista SP1, by then it was too late. The public had become permanently dissatisfied with Vista. Regardless of the quality of the OS these days, the Vista name has become poisonous.

Of course as far as consumer sales are concerned, this hasn’t significantly dented Vista adoption. Vista’s still going out on virtually every new consumer-level computer shipped. People may be dissatisfied, but so far they’re not doing anything about it other than complaining. Business users on the other hand are acting, or rather are not acting. They’re not upgrading to Vista on existing computers, and on new computers they’re still installing XP. Vista’s not taking at the corporate level, and that’s Microsoft’s more immediate problem.

So here we are today with Windows 7 Release Candidate 1, Microsoft's grand attempt at taking Vista and building a more palatable operating system out of it. With Windows 7, Microsoft has ripped the Vista playbook to shreds and they are going an entirely different route. The goal: make Windows 7 successful before it even ships. 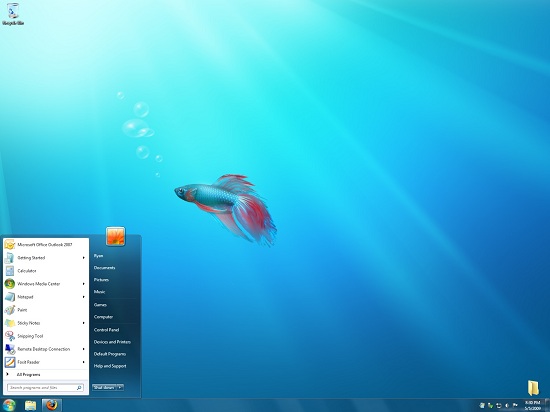