For brightness, black level, and contrast points, we use the same colorimeter setup described earlier. Specifically, an Xrite i1D2 with ColorEyes Display Pro, and take measurements. Dynamic contrast is always turned off, as this throws off our results. We also let the panels settle in for a half hour at the respective settings before taking any measurements. This is especially important for the X270W since it has a CCFL backlight, and as such there is a discernible warm up period. 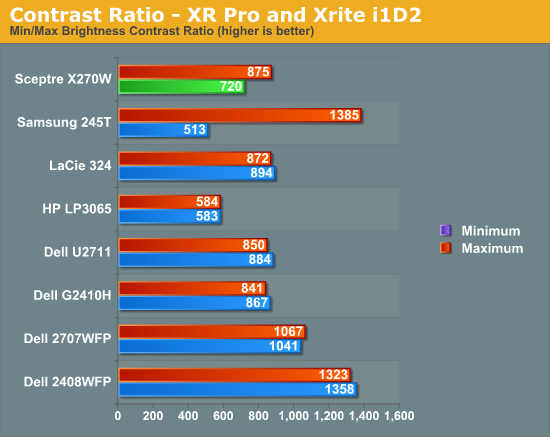 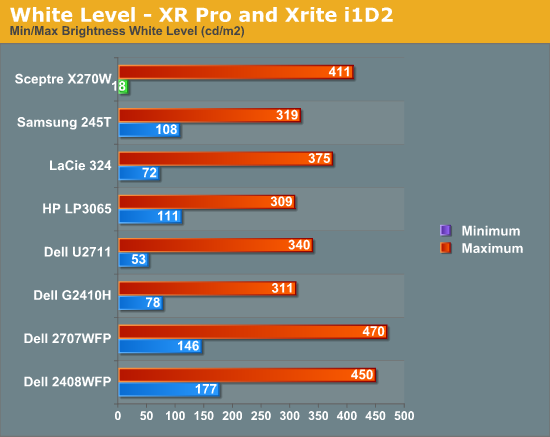 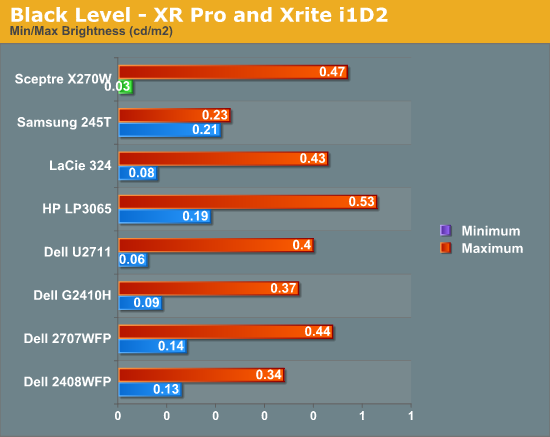 Black level is an important metric, since it directly represents the extinction ratio of the crossed polarizers in the TN cells. Remember, when a pixel is desired to be black, the photoelectric crystal in the cell changes linearly polarized light 90 degrees out of phase, so it is blocked by the polarizer. Higher extinction ratios (and thus better crystals and materials) result in lower (better) black levels.

We recommend running monitors at around 200 nits of luminous intensity, just because this is often where some of the best color tracking sits, and it’s enough of a balance to not result in eye stress from looking around the room and having your pupil adjust. I personally am a bit of a light-crazy person and usually crank my displays brightness to the max (I consider 400 nits normal), but again, forget I ever said that. ;-)

The charts show the dynamic range in brightness, and the respective black levels at each brightness. Brightness isn’t quite up to the 400 nits spec, falling short at 293. This is still pretty bright, but not quite as bright as I’m used to. Again, CCFL isn’t the brightest, but it does give better color gamut than WLED.

What we’re really interested in, however, is the contrast ratio. At the extreme, we fall short of 1000:1 with 720 and 646 at both brightness ends. Respectable, but not stellar.

Update: We were able to get the X270W up past the 400 nit specification by changing contrast to 100% in addition to brightness. At those settings, the brightness for white is 411 nits, and blacks are 0.47 nits. We've updated the graphs above to reflect those changes. Contrast also improved slightly, up from 720 to 875.

Obviously, the X270W can go bright if you set the OSD settings appropriately. Things are more washed out than we'd like with contrast at 100%, but you do get all of those cd/m^2 you pay for, and 11 more.