Tegra 2 was a platform developed primarily to serve the smartphone / tablet market. We were quite surprised earlier this year when it was chosen to power the Boxee Box. With Boxee's HTPC background, consumers were bound to have tall expectations and we were not too sure that Tegra 2 would be able to fulfil the necessary requisites.

The unit which was demonstrated at the 2010 CES did have a Tegra 2 SoC inside. Things were looking good, and the unit was slated to go into mass production towards the end of Q2. However, as Boxee started doing some stress tests, they realized that Tegra 2 wasn't living upto expectations. In particular, they found that the Tegra 2 was incapable of playing back high profile 1080p H.264 videos at even 10 Mbps. Boxee was well aware that if they shipped the unit with any sort of limitation, it would reflect very badly upon them. They went back to the drawing board and started approaching other companies with similar chipsets. Boxee's requirements were three-fold. The platform needed acceleration for Flash, considering that most of the online video content is delivered through it. The second requirement was that the platform had to support a browser platform (WebKit), and finally, the platform had to support decode of even the most demanding video encodes. The shift from Tegra 2 to CE4100 delayed the mass production to the middle of Q4, but that was inevitable once Tegra 2 had to be replaced. 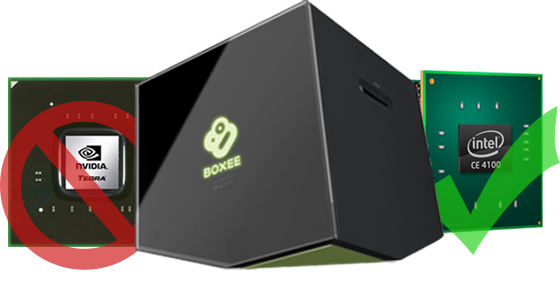 Boxee was primarily developed for HTPCs based on the x86 platform. However, the form factor of the Boxee Box ruled out any sort of a real motherboard / x86 processor inside with similar multimedia capabilities. An x86 SoC was the need of the hour, and fortunately, Intel had just released a solution. This was the Atom based CE4100, their second-generation x86 based SoC targeted at the DTV / IPTV / STB / Blu-Ray player market. Prior to the CE3100, Intel used to have SoCs based on the XScale platform. The CE3100 had a Pentium-M core, while the CE4100 has an Atom based core, but we will cover this more in detail in the next section. In the SoC space, it is not possible for Intel to have the same sort of margins that it gets in the microprocessor space. This is one of the main reasons why no mainstream products based on the Intel CE3100 were seen in the market. Promising devices such as the Yuixx were announced, but they never saw the light of the day. In the meanwhile, Intel released the next generation product (Sodaville) at the IDF in September 2010. Things are looking up for Intel now, and at $199, the Boxee Box seems to be the perfect mainstream launchpad for the CE4100.

Being a SoC, the CE4100 has all the necessary IPs built in, including a specialized GPU, a video decode accelerator and an audio DSP. The more powerful nature of the CE4100 also brought with it some design challenges for D-Link and Boxee in the form of increased power consumption and more heat to dissipate. We weren't allowed to open up the unit during the meeting yesterday, but suffice to say that we saw a pretty big heat sink through the heat dissipation vents. There is also a very small fan inside the unit, but it was very close to being completely silent. We really would have a hard time seeing people complain about this unless the fan spins up really hard under load.