The new Boxee Box retains the same form factor as the one that was displayed during the 2010 CES. While the model shown in CES had a USB port in the front, the new design's USB ports are both at the back. Other than that, the external appearance also remains the same. For a recap, there is a SD card slot on one side. The Boxee logo (capable of lighting up) is on the other side. At the rear, one of the sides is plain, while the other side has an Ethernet port (100 Mbps), a HDMI 1.3a port, SPDIF for multichannel digital audio out to an AV receiver, stereo audio ports for direct speaker connections and the dual USB ports. There is also a slot for a DC power connection from a plug-in adapter. This side also has slots for heat ventilation. 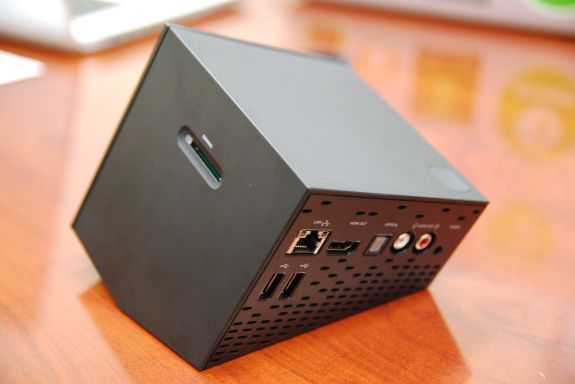 The remote is more interesting. FCC filings for the remote are now public. It is one of the revolutionary remote designs that we have encountered. It is imperative that other remote manufacturers (particularly those who manufacture the Media Center varieties) follow suit and start including keyboards on the rear side of the unit. Of course, consumers may have the usual crib about this being of the non-IR variety. For those who need to use their universal remotes, the USB IR dongle is always an option.

Once past the hardware specifications, let us look at the Boxee Box in relation to the Smart TV push from Intel. The Intel CE4100 also powers the yet-to-be-released Google TV. While the Google TV is supposed to help Google by making people use the TV to search and browse the Internet, Boxee gave us the impression that browsing the Internet through their box is only a fall back, and not the intended mainstream usage. For example, websites such as Vimeo which aren't directly supported by Boxee can be opened in a web browser, and Boxee auto detects the Flash content being played and pushes it out to occupy the whole screen. This is a fundamental difference between the Google TV and the Boxee Box, considering that both are based on the same platform. While Google TV will be based on Android, the Boxee Box runs on a custom Linux distribution from Intel.

No one can ignore the other elephant in the room, which can muscle into the party based solely on its marketing prowess. We are talking about the Apple TV. Boxee admits that they are in direct competition with Apple TV, but go on to suggest that there is space for both parties in the ecosystem. The official line is that people preferring the walled garden approach wouldn't do much wrong in opting for Apple's offering. On the other hand, Boxee believes that they should enable customers to enjoy content from a variety of sources, without restrictions. They do not believe in acting as gatekeepers of any sort, and this is a very important factor for many consumers.

The most interesting aspect of the specifications is that the streamer is a x86 platform at its core. With a clock rate of 1.2 GHz, the Atom core should be no slouch when it comes to CE applications. With the GPU being clocked at 400 MHz, the raw graphics power is close to twice that of the iPhone 4. The powerful decode engine gives it scope to play a much wider variety of media compared to the other media streamers. The x86 host processor technically makes this a HTPC. Online services which try to discriminate against browser access through this CE device will be standing on thin ground from a consumer's perspective. That said, we will have to see how many content providers get on board when the product gets to the market. We also hope that content providers eventually refrain from treating PCs and CE devices differently.