More than just the slim form factor that I mentioned earlier, the Zbox HD-ID34 comes with a few additional upgrades over the previously reviewed HD-ID11. The unit includes only 4 USB ports now compared to the 6 found in the earlier unit. However, two of the ports (one in the front and one at the back) are now USB 3.0 capable. The third port is a dual eSATA (3.0 Gbps) / USB 2.0 port.  Only one is a standalone USB 2.0 port. DVI and HDMI ports have been included for video output. Stereo analog audio ports and an optical SPDIF port round up the audio connections.

There is an internal SATA (3.0 Gbps) connector as well for an internal HDD or SSD, as well as two DIMM slots that support up to 4 GB of DDR2-800 memory.  The unit also includes built in Wi-Fi with b/g/n support as well as a GbE port. The 802.11n card inside the unit uses dual stream technology (2T2R) to achieve 300 Mbps data rate. A slot loading slim blu-ray drive is also part of the system for those consumers who still playback media from optical discs. The unit also ships with the Zotac VESA mount, which allows the unit to be mounted on the back of your display, or wall mounted next to a likewise wall mounted display.  An OEM copy of PowerDVD 9 is included for Blu-Ray playback despite the fact that the unit ships without an OS.  Finally, the system also includes a media card reader to complete the connectivity options. 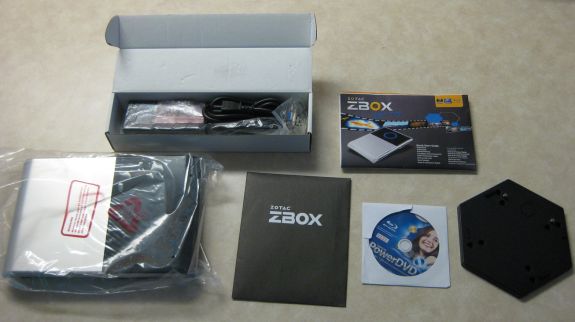 All of these included features really allow the Zotac Zbox to be used in a lot of different scenarios. Unfortunately, one I didn’t find the unit all that useful for was the role of the primary HTPC in the house. Most users need DTS-HD MA and Dobly TrueHD bitstreaming from their primary HTPC for their AV receiver to decode. The HD-ID34 is not capable of bitstreaming HD audio codecs, and thus, may not please many audiophiles.  To further compound the problem, the included PowerDVD 9 only comes with a limited 2ch+2Ch license.  So, even though the hardware can at least output down sampled 8 channel LPCM, the software included does not support that many channels.

However, away from the main home theater, the perks of the Zotac Zbox HD-ID34 begin to shine. It results in an elegant media solution when paired with a wall mounted bedroom or recreation room TV. The Zbox can be mounted on the wall next to a wall mounted television and connected via a single HDMI cable.  Add a remote and IR receiver and you have a beautiful streaming solution with limited wire mess. The bitstreaming and software limitations in these scenarios are lessened, as many televisions outside of the home theater do not have much beyond stereo setups. The connectivity options allow for the use of high speed external storage devices, and the included blu-ray drive allow the Zbox to be used as a media hub.  Discs can be ripped and stored on the external drives for playback over other networked devices including a main HTPC which then doesn’t need to have a Blu-Ray drive of its own.