Okay, we've set the stage for the performance metrics, and again it's important to note that we are intentionally reviewing a bog-standard Dell Arrandale/Calpella platform. Intel wanted us to have a reference point for a good Arrandale setup for the arrival of Sandy Bridge, and that meant sticking with the Intel IGP and CPU. It's not a bad combination, but if Anand's desktop Sandy Bridge preview is any indication, we're about to see some significant increases in both CPU and GPU performance, all without dramatically affecting battery life—and if we're lucky, battery life might even improve. But let's not get ahead of ourselves; let's see how the E6410 stacks up in application performance and battery life. Note that the performance section of this review will focus more on Intel rather than Dell; if we were recommending the E6410, we'd likely opt for the FastTrack version with Quadro NVS 3100.

We've highlighted the Dell XPS 15, Apple MBP 13, and Acer 5551G as points of comparison for our current "best" mainstream notebook, the top Core 2 IGP combination, and a representative of AMD's performance (respectively). The Toshiba A660D is also slightly highlighted as a sample of AMD's switchable graphics platform. With a discrete GPU the Acer 5551G is obviously going to blow away anything with Intel IGP in graphics applications; the flipside is that it will hurt in battery life tests. Is it fair to compare something like the 5551G with the E6410? As a direct comparison, no: the E6410 is a business laptop with substantially better build quality and features. However, if we're just looking at performance, the E6410 is representative of the current Arrandale landscape as a whole, and pricing on basic Arrandale laptops is quite similar to that of the 5551G—the Acer TravelMate TM5742 for instance checks in at $610. On to the charts…. 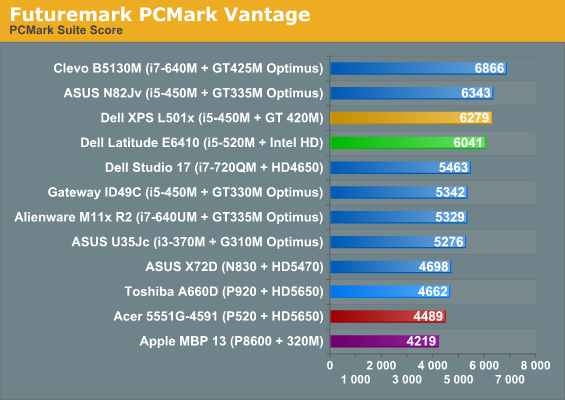 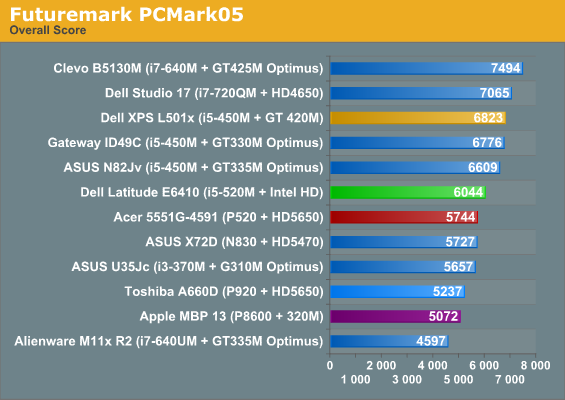 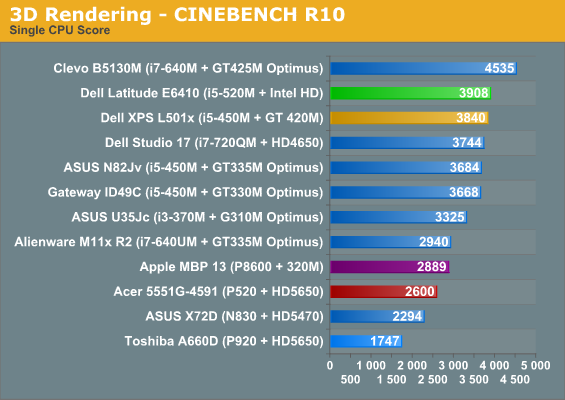 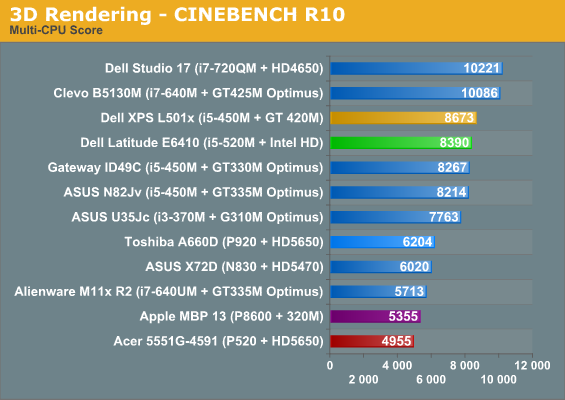 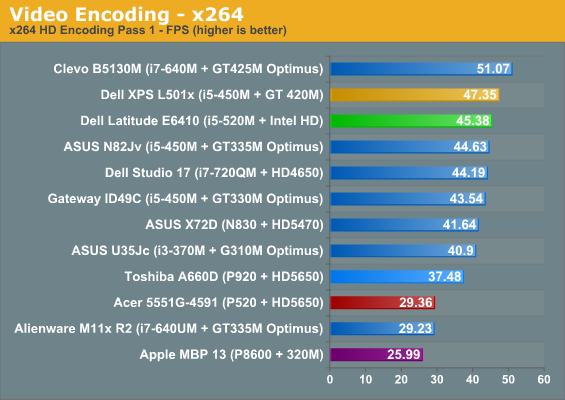 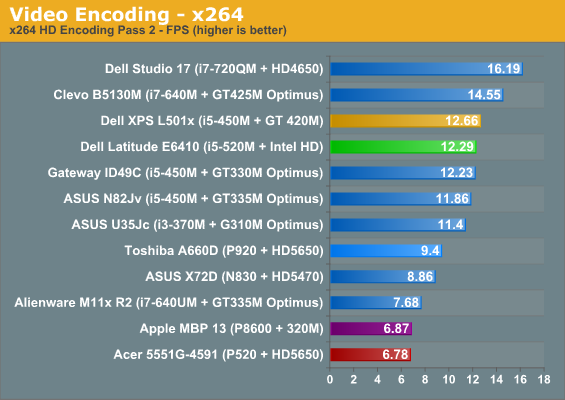 Starting with our application tests, the E6410 falls in the upper-middle of the PCMark charts and is usually in the top three or four slots for CPU centric tasks like Cinebench and x264 encoding. The i5-520M may not be the fastest Arrandale chip on the block, but it's definitely fast enough for all but the most demanding applications. It does fall behind the i5-450M in the XPS 15 in some tests, but PCMark05 lets the GPU skew the results quite a bit. That's not entirely unfair, of course, since the GPU can do a lot more than just 3D gaming. The three AMD laptops fall near the bottom of the charts, which merely illustrates once more that AMD's current K10.5 CPUs are ripe for replacement. The old Core 2 platform with NVIDIA 320M IGP, represented by the MacBook Pro 13, also checks in near the bottom of the application performance charts.

Next, let's throw out the 3DMark scores just as a point of reference for graphics horsepower. We'll include the older 3DMark versions this time, since IGPs are a better fit for the 03/05 iterations. 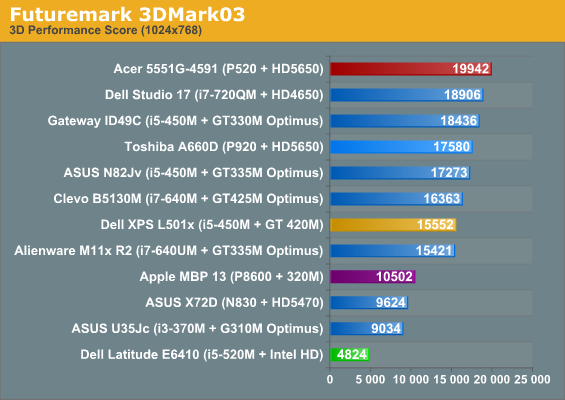 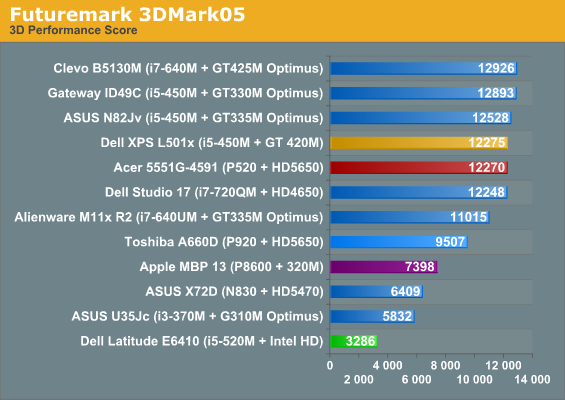 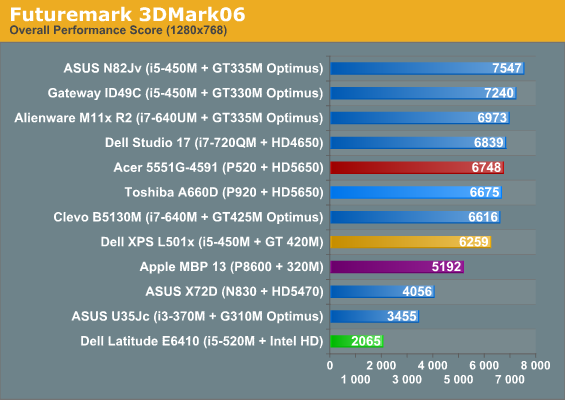 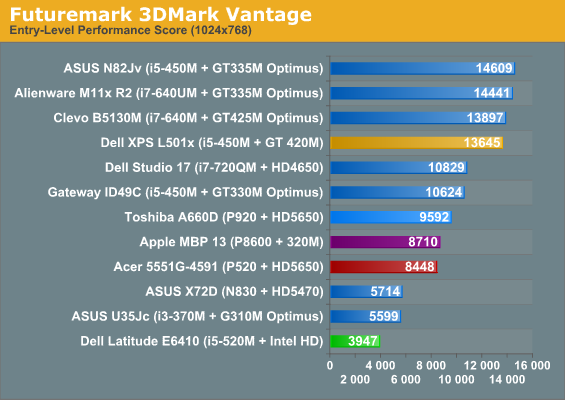 Here the discrete GPUs in the AMD systems make a good showing. We've mentioned in quite a few reviews that graphics benefits far more from a fast GPU than from a fast CPU, and while 3DMark isn't an actual game it definitely supports that point. The MBP 13 has an IGP that's more than twice as fast as the Intel HD Graphics, and depending on which 3DMark you look at the 5551G can nearly double the 320M. As long as you have a moderately fast CPU, you can easily go as high as HD 5650/GT 435M and in most cases the GPU will be what holds you back. As a last point of comparison, let's bring in the battery life figures. 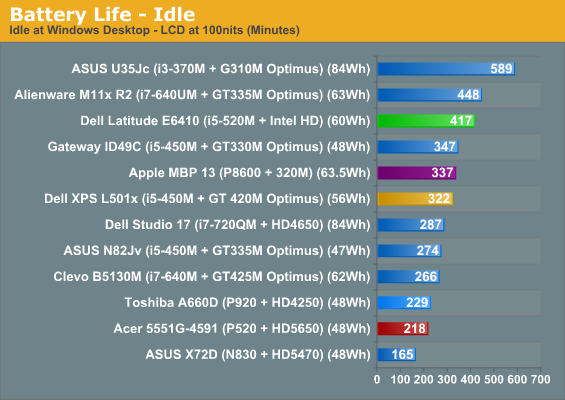 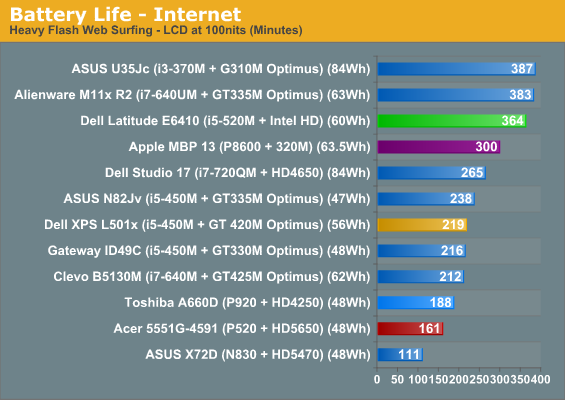 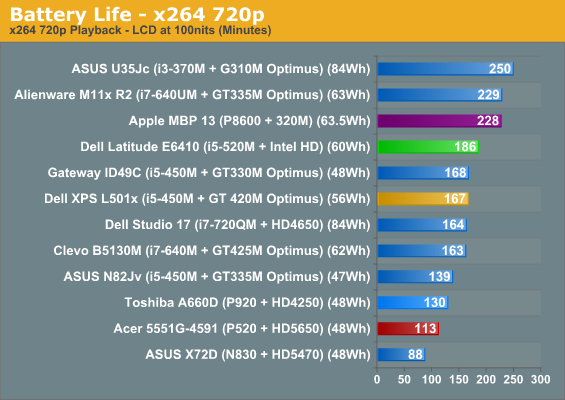 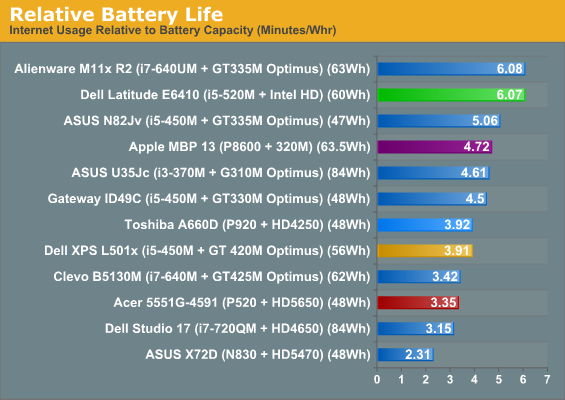 Intel's CPU+IGP may not impress as far as graphics performance, but it does manage to deliver very good battery life. Apple's MBP 13 is obviously handicapped by running Windows 7, but we're at least on a level playing field. For pure battery life, only the M11x R2 with ULV CPU (and a slightly larger battery) and the U35Jc (with a much larger battery) consistently top the E6410. Dell does have some good power management features, so the E6410 is probably about as good a representative of Intel's ideal battery life as we can find. While the IGP is behind the AMD and NVIDIA graphics solutions in terms of performance, it allows for much better battery life—perfect for a business laptop that isn't meant to play games.

If we look at relative battery life (i.e. factoring in battery capacity), the E6410 is right next to the U35Jc (6.95 vs. 7.01) and only slightly behind the M11x and ID49C in the idle figures (sorry, no chart for that data). The relative Internet battery life puts the E6410 in second place, bested only by the M11x and then only by a fraction of a percent. The only test where Intel's IGP appears to fall short is in x264 playback. (We use an x264 720p file, but the results should be representative of viewing most other H.264 video formats). The Gateway ID49C, M11x, and MBP 13 all surpass the E6410 and deliver 13-16% better relative battery life than the E6410 (again, no chart on this one). Still, three hours of H.264 video playback (provided you're not spinning a Blu-ray drive to get that content!) is quite good, and you could always upgrade to Dell's 9-cell battery if you need more.