Just like seeing a Corsair logo on a case box tells me it's going to be an easy night, the SilverStone logo on the front of the Temjin TJ04-E tells me I'd better fish out the instruction manual and familiarize myself with how everything's supposed to go together before I start the assembly proper. There's a method to SilverStone's madness and like a good puzzle box it's easy to see how everything comes together once you know how the pieces are supposed to fit...you just need to know it first.

Thankfully the TJ04-E isn't quite as involved as many of their other designs. SilverStone includes the front six motherboard standoffs built into the tray (though fishing the other three out of the bag of screws is more of a headache than it ought to be), and popping the board and I/O shield in was painless enough. The power supply is just as easy to install. It's when you get to the drives that things start to get a bit wonky.

First, you'll need to remove the large drive cage by unscrewing the top and bottom of it; from there it slides out on rails. 3.5" drives are mounted with screws instead of rails or trays, but honestly this doesn't strike me as being a particularly major issue. Rails/trays are a nice convenience in assembly that wind up not being super essential in practice (unless you're the type of user that changes their storage subsystem on a regular basis). What may throw you for a loop is the fact that hard drives are mounted upside-down in the TJ04-E instead of right-side up, and they're front-to-back facing instead of lateral, a sacrifice needed to make space for the side intake fan.

The 2.5" drive cage, on the other hand, feels like the least thought out part of the TJ04-E's design. Our 180mm power supply had to have its modular cables routed through the cage rather than around as SilverStone intended, and while SilverStone recommends removing this cage before installing the power supply (or installing drives in it for that matter), they use extra-small Phillips head screws in the bottom of the case to keep it in place. It's a small but unnecessary nuisance. 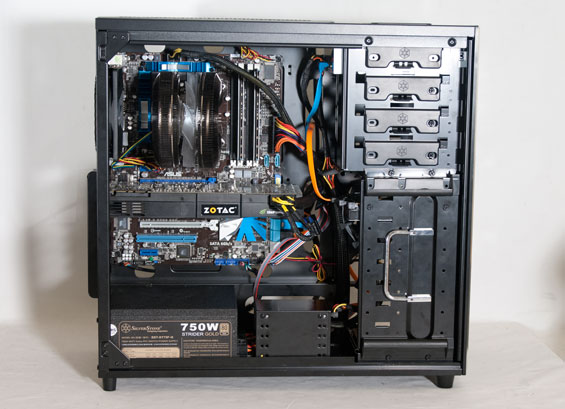 Installing expansion cards is a little more work than usual, too. Where most cases extrude the back of the enclosure, on the TJ04-E you need to remove a cover first, then remove the individual slot cover, then install the video card, then install the cover again. It adds an extra step that you may run into just enough for it to be annoying. 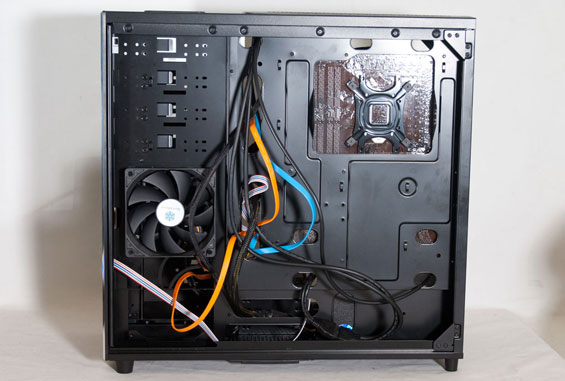 As mentioned before, cabling winds up being a bit more of an issue than you'll want it to be, but a large part of that is due to having used a 180mm power supply in our testbed instead of a 160mm one. By using a 180mm PSU, you can't route cables through the hole in the tray next to the PSU and the result is a messier cabling situation only compounded by the orientation of the hard drives and SSDs. Also worth noting is that all of the fans use 3-pin headers; there are no molex connectors in this case.

Assembling a system in the SilverStone Temjin TJ04-E was more involved than most ATX cases tend to be, but not quite as involved as most of SilverStone's other cases tend to be. This is an interesting variation on traditional case design that I suspect needs a bit more experimentation for the end user to really make the most of it.