Our second card of the day is EVGA’s GeForce GTX 670 Superclocked, which in EVGA’s hierarchy is their first tier of factory overclocked cards. EVGA is binning GTX 670s and in turn promoting some of them to this tier, which means the GTX 670 Superclocked are equipped with generally better performing chips than the average reference card.

Other than the clockspeed changes, the GTX 670 SC is an almost-reference card utilizing a reference PCB with a slightly modified cooler. EVGA is fabricating their own shroud, but they’ve copied NVIDIA’s reference shroud down to almost the last detail. The only functional difference is that the diameter of the fan intake is about 5mm less, otherwise the only difference is that EVGA has detailed it differently than NVIDIA and used some rounded corners in place of square corners.

The only other change you’ll notice is that EVGA is using their own high flow bracket in place of NVIDIA’s bracket. The high flow bracket cuts away as much metal as possible, maximizing the area of the vents. Though based on our power and temperature readings, this doesn’t seem to have notably impacted the GTX 670 SC.

While we’re on the matter of customized cards and factory overclocks, it’s worth reiterating NVIDIA’s position on factory overclocked cards. Reference and semi-custom cards (that is, cards using the reference PCB) must adhere to NVIDIA’s power target limits. For GTX 670 this is a 141W power target, with a maximum power target of 122% (170W). Fully custom cards with better power delivery circuitry can go higher, but not semi-custom cards. As a result the flexibility in building semi-custom cards comes down to binning. EVGA can bin better chips and use them in cards such as the Superclocked – such as our sample which can go 17 boost bins over the base clock versus 13 bins for our reference GTX 670 – but at the end of the day for stock performance they’re at the mercy of what can be accomplished within 141W/170W.

In any case, as the card is otherwise a reference GTX 670 EVGA is relying on the combination of their factory overclock, their toolset, and their strong reputation for support to carry the card. EVGA has priced the card at $419, $20 over the GTX 670 MSRP, in-line with other factory overclocked cards.

On the subject of pricing and warranties, since this is the first EVGA card we’ve reviewed since April 1st, this is a good time to go over the recent warranty changes EVGA has made.

Starting April 1st, EVGA has implemented what they’re calling their new Global Warranty Policy. Starting July 1st, 2011 (the policy is being backdated), all new EVGA cards ship with at least a 3 year warranty. And for the GTX 600 series specifically, so far EVGA has only offered models with a 3 year warranty in North America, which simplifies their product lineup.

The second change is that the base 3 year warranty no longer requires product registration. EVGA has other ways to entice buyers into registering, but they’ll now honor all applicable cards for 3 years regardless of the registration status. At the same time the base 3 year warranty is now a per-product warranty (e.g. a transferable warranty) rather than per-user warranty, so the base warranty will transfer to 2nd hand buyers. The extended warranties however will not.

The third change is how EVGA is actually going to handle the warranty process. First and foremost, EVGA is now allowing cards to be sent to the nearest EVGA RMA office rather than the office for the region the card was purchased from. For example a buyer moving from Europe to North America can send the card to EVGA’s North American offices rather than sending it overseas.

Finally, EVGA is now doing free cross shipping, alongside their existing Advanced RMA program. EVGA will now cross-ship replacement cards for free to buyers. The buyer meanwhile is responsible for paying to ship the faulty card back and putting up collateral on the new card until EVGA receives the old card.

There’s also one quick change to the step-up program that will impact some customers. With the move to purchasing extended warranties, the step-up program is only available to customers who either purchase an extended warranty or purchase an older generation card that comes with a lifetime warranty. Step-up is not available to cards with only the base 3 year warranty.

Moving on, along with EVGA’s new warranty EVGA is bundling the latest version of their GPU utilities, Precision X and OC Scanner X. 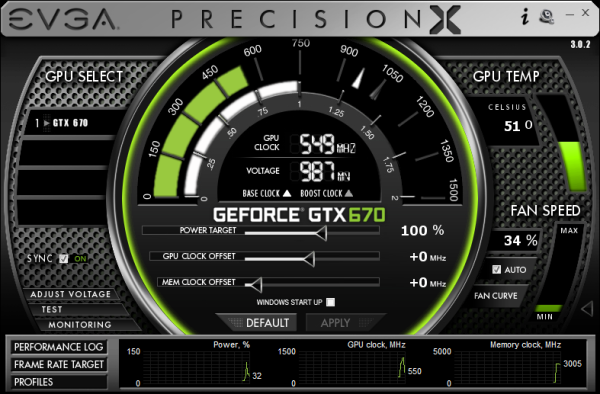 Precision X, as we touched upon quickly in our GTX 680 review, is the latest iteration of EVGA’s Precision overclocking & monitoring utility. It’s still based on RivaTuner and along with adding support for the GTX 600 series features (power targets, framerate caps, etc), it also introduces a new UI. Functionality wise it’s still at the top of the pack along with the similarly RivaTuner powered MSI Afterburner. Personally I’m not a fan of the new UI – circular UIs and sliders aren’t particularly easy to read – but it gets the job done.

OC Scanner X has also received a facelift and functionality upgrade of its own. Along with its basic FurMark-ish stress testing and error checking, it now also offers a basic CPU stress test and GPU benchmark.