Our first card of the day is EVGA’s entry, the EVGA GeForce GTX 660 Ti Superclocked.  Among all of the GTX 670 cards we’ve looked at and all of the GTX 660 Ti cards we’re going to be looking at, this is the card that is the most like its older sibling. In fact with only a couple cosmetic differences it’s practically identical in construction.

EVGA will be clocking the GTX 660 Ti SC at 980MHz for the base clock and 1059MHz for the boost clock, which represents a 65MHz (7%) and 79MHz (8%) overclock respectively. Meanwhile EVGA has left the memory clocked untouched at 6GHz, the reference memory clockspeed for all of NVIDIA’s GTX 600 parts thus far.

The GTX 660 Ti is otherwise identical to the GTX 670, for all of the benefits that entails. While NVIDIA isn’t shipping a proper reference card for the GTX 660 Ti, they did create a reference design, and this appears to be what it’s based on. Both the EVGA and Zotac cards are using identical PCBs derived from the GTX 670’s PCB, which is not unexpected given the power consumption of the GTX 660 Ti. The only difference we can find on this PCB is that instead of there being solder pads for 16 memory chips there are solder pads for 12, reflecting the fact that the GTX 660 Ti can have at most 12 memory chips attached. 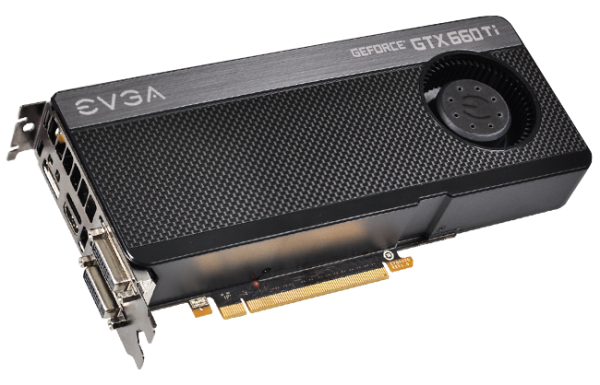 With this PCB design the PCB measures only 6.75” long, with the bulk of the VRM components located at the front of the card rather than the rear. Hynix 2Gb 6GHz memory chips are placed both on the front of the PCB and the back, with 6 on the front and 2 on the rear. The rear chips are directly behind a pair of front chips, reflecting the fact that all 4 of these chips are connected to a single memory controller.

With the effective reuse of the GTX 670 PCB, EVGA is also reusing their GTX 670 cooler. This cooler is a blower, which due to the positioning of the GPU and various electronic components means that the blower fan is off of the PCB entirely by necessity. Instead the blower fan is located behind the card in a piece of enclosed housing. This housing pushes the total length of the card out to 9.5”. Housed inside of the enclosure is a block-style aluminum heatsink with a copper baseplate that is providing cooling for the GPU. Elsewhere, attached to the PCB we’ll see a moderately sized aluminum heatsink clamped down on top of the VRMs towards the front of the card. There is no cooling provided for the GDDR5 RAM.

Elsewhere, at the top of the card we’ll find the 2 PCIe power sockets and 2 SLI connectors. Meanwhile at the front of the card EVGA is using the same I/O port configuration and bracket that we saw with the GTX 670. This means they’re using the NVIDIA standard: 1 DL-DVI-D port, 1 DL-DVI-I port, 1 full size HDMI 1.4 port, and 1 full size DisplayPort 1.2. This also means that the card features EVGA’s high-flow bracket, a bracket with less shielding in order to maximize the amount of air that can be exhausted.

Rounding out the package is EVGA’s typical collection of accessories and knick-knacks. In the box you’ll find a pair of molex power adapters, a quick start guide, and some stickers. The real meat of EVGA’s offering is on their website, where EVGA card owners can download their wonderful video card overclocking utility (Precision X), and their stress test utility (OC Scanner X). The powered-by-RivaTuner Precision X and OC Scanner X still set the gold standard for video card utilities thanks to their functionality and ease of use. Though personally I’m not a fan of the new UI – circular UIs and sliders aren’t particularly easy to read – but it gets the job done. 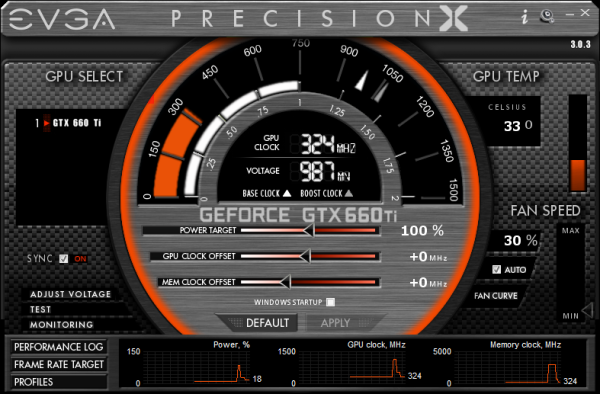 Next, as with all EVGA cards, the EVGA GeForce GTX 660 Ti Superclocked comes with EVGA’s standard 3 year transferable warranty, with individual 2 or 7 year extensions available for purchase upon registration, which will also unlock access to EVGA’s step-up upgrade program. Finally, the EVGA GeForce GTX 660 Ti Superclocked will be hitting retail with an MSRP of $309, $10 over the MSRP for reference cards.