When it comes to the physical design and functionality of the GTX 780 Ti, to no surprise NVIDIA is sticking with what works. The design of the GTX Titan and its associated cooler have proven themselves twice over now between the GTX Titan and the GTX 780, so with only the slightest of changes this is what NVIDIA is going with for GTX 780 Ti, too. Consequently there’s very little new material to cover here, but we’ll quickly hit the high points before recapping the general design of what has now become the GTX 780 series.

The biggest change here is that GTX 780 Ti is the first NVIDIA launch product to feature the new B1 revision of their GK110 GPU. B1 has already been shipping for a couple of months now, so GTX 780 Ti isn’t the first card to get this new GPU. However while GTX Titan and GTX 780 products currently contain a mix of the old and new revisions as NVIDIA completes the change-over, GTX 780 Ti will be B1 (and only B1) right out the door.

As for what’s new for B1, NVIDIA is telling us that it’s a fairly tame revision of GK110. NVIDIA hasn’t made any significant changes to the GPU, rather they’ve merely gone in and fixed some errata that were in the earlier revision of GK110, and in the meantime tightened up the design and leakage just a bit to nudge power usage down, the latter of which is helpful for countering the greater power draw from lighting up the 15th and final SMX. Otherwise B1 doesn’t have any feature changes nor significant changes in its power characteristics relative to the previous revision, so it should be a fairly small footnote compared to GTX 780.

The other notable change coming with GTX 780 Ti is that NVIDIA has slightly adjusted the default temperature throttle point, increasing it from 80C to 83C. The difference in cooling efficiency itself will be trivial, but since NVIDIA is using the exact same fan curve on the GTX 780 Ti as they did the GTX 780, the higher temperature throttle effectively increases the card’s equilibrium point, and therefore the average fan speed under load. Or put another way, but letting it get a bit warmer the GTX 780 Ti will ramp up its fan a bit more and throttle a bit less, which should help offset the card’s increased power consumption while also keeping thermal throttling minimized.

Moving on, since the design of the GTX 780 Ti is a near carbon copy of GTX 780, we’re essentially looking at GTX 780 with better specs and new trimmings. NVIDIA’s very effective (and still quite unique) metallic GTX Titan cooler is back, this time featuring black lettering and a black tinted window. As such GTX 780 Ti remains a 10.5” long card composed of a cast aluminum housing, a nickel-tipped heatsink, an aluminum baseplate, and a vapor chamber providing heat transfer between the GPU and the heatsink. The end result is the GTX 780 Ti is a quiet card despite the fact that it’s a 250W blower design, while still maintaining the solid feel and eye-catching design that NVIDIA has opted for with this generation of cards. 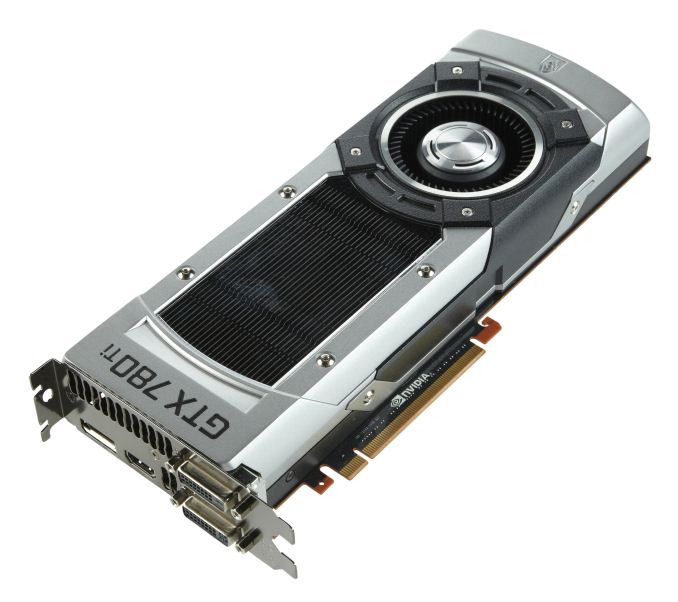 Drilling down, the PCB is also a re-use from GTX 780. It’s the same GK110 GPU mounted on the same PCB with the same 6+2 phase power design. This being despite the fact that GTX 780 Ti features faster 7GHz memory, indicating that NVIDIA was able to hit their higher memory speed targets without making any obvious changes to the PCB or memory trace layouts. Meanwhile the reuse of the power delivery subsystem is a reflection of the fact that GTX 780 Ti has the same 250W TDP limit as GTX 780 and GTX Titan, though unlike those two cards GTX 780 Ti will have the least headroom to spare and will come the closest to hitting it, due to the general uptick in power requirements from having 15 active SMXes. Finally, using the same PCB also means that GTX 780 has the same 6pin + 8pin power requirement and the same display I/O configuration of 2x DL-DVI, 1x HDMI, 1x DisplayPort 1.2. 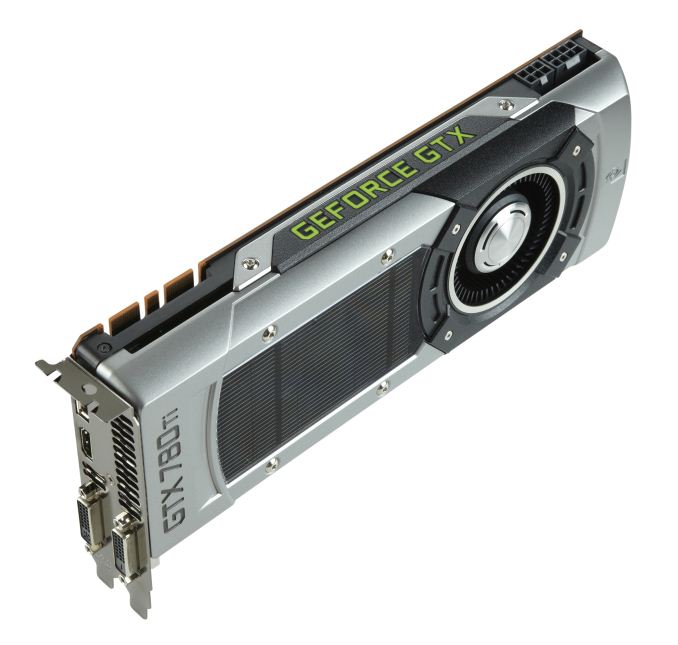 On a final note, for custom cards NVIDIA won’t be allowing custom cards right off the bat – everything today will be a reference card – but with NVIDIA’s partners having already put together their custom GK110 designs for GTX 780, custom designs for GTX 780 Ti will come very quickly. Consequently, expect most (if not all of them) to be variants of their existing custom GTX 780 designs.