When we first decided upon the 760MP platform to use as our Database Server solution we realized that there were going to be a few hurdles that we'd come across.  First of all, at the time and to this day there is still only one 760MP motherboard available on the market.  That motherboard is the Tyan Thunder K7 which we featured in our review of the 760MP platform.  Now there's nothing wrong with the Thunder K7, in fact there is quite a bit that's right about the Thunder K7 but it does have its quirks.

First of all, the board requires the use of a custom power supply.  According to AMD, at the time they were designing the reference 760MP motherboard Intel's spec for the 24-pin power connector featured on their Dual Xeon board had not been finalized so AMD went with whatever data they did have.  The final spec ended up having two pins of the connector flipped, rendering AMD's implementation incompatible with Intel's.  Although this didn't make much sense to us because the Xeon and the i860 platform did launch before the 760MP, we're just presenting AMD's side of the story.  AMD has since told us that they will be moving to Intel's specification.  Unfortunately this means that everyone that purchased the very expensive custom power supplies for their Thunder K7 boards will never be able to use them with another motherboard again.

Another issue with this custom power supply is the incredible power ratings on the unit.  The NMB unit we tested with originally had a 460W rating, but the only reason for the 460W requirement was because of the fact that Tyan wanted to achieve AGP Pro110 compliance on their motherboard.  The AGP Pro110 spec states that you must be able to deliver 110W of power to the AGP Pro slot which tailors to a highly specific market since very few AGP Pro cards require that much power.  For those users that don't require the AGP Pro110 compliance, the added power is almost completely wasted.

Because of the limited power supply options, we were almost forced to go with a larger 4U or 5U chassis so we could use a full sized power supply.

The second limitation the board imposed on us was the requirement for Registered ECC DDR SDRAM.  Since there are only four DIMM slots on the Thunder K7 itself (a limitation of the chipset), we had to use the highest density DIMM modules we could find.  Although it's quite easy to come by 256MB Registered ECC DDR SDRAM, that would only leave us with 1GB of memory in the server, a downgrade from our previous 1.5GB setup; we'd have to get 512MB modules.

It turns out that there are only two modules that work particularly well with the Thunder K7, and only one of those are available in 512MB parts.  Samsung 256MB modules and Corsair 512MB modules have been tested and work well with the Thunder K7 in a fully loaded environment running in very stressful conditions.  The web's favorite, Crucial, didn't have any 512MB Registered ECC modules either so there was no taking advantage of their very aggressive prices. 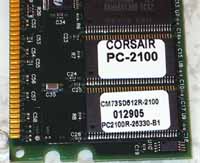 We instead put in a call to Memman and Corsair and managed to secure 4 x 512MB Registered ECC DDR266 modules for the server, a 33% increase in memory size – those of you that have had experience with heavily loaded database servers will know that more memory can always be of use.

Finally cooling was a major issue.  Our Dual Pentium III 866s together produced less heat than most of today's higher clocked single Athlon processors, but migrating to a dual Athlon platform would definitely require some heavy cooling.

On the other side of the country…

Meanwhile, VA Linux Systems, was working very closely with AMD and Tyan to produce a 1U 760MP server based on the Thunder K7 motherboard.  Requiring an experienced member of the industry to help manufacture the servers, VA Linux teamed up with APPRO International, a 10 year old rackmount server manufacturer based out of Milpitas, California.  Just before the product was ready, VA Linux announced that they were pulling out of the hardware market before the end of their fiscal year, which ended on July 28, 2001.  This left APPRO with the entire burden (not necessarily a bad thing) of completing, producing and promoting this 1U 760MP server.

We already knew how well the 760MP platform performed; the real question was how well designed would APPRO's 1124 Athlon MP Server be?