Because of the distinct similarities between the BIOS of the SOC Force and the UD5H we previously reviewed, the BIOS and software overviews are to be almost identical.  Rather than refer back to the UD5H, this has been updated with options specific to the SOC Force.

For Z97, the graphical BIOS ecosystem (either UEFI or EFI) has the opportunity for incremental updates.  This might be fully fledged adjustments graphically, the addition of new features or the results of the engineers internally flexing some talent.  For GIGABYTE, the Z97 BIOS in general uses the same topology from Z87 – a high definition mode on top of the classic mode from Z77.  The main difference is the use of a ‘Startup Guide’ akin to an easy mode when you first enter the BIOS: 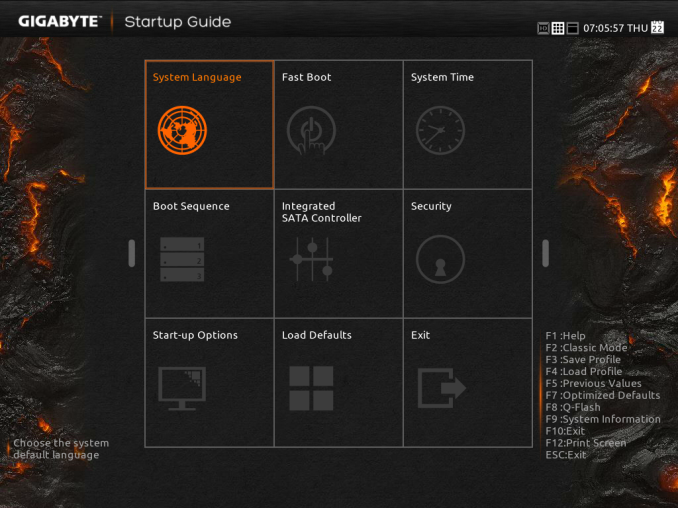 The options in the startup guide include Fast Boot options, Boot Sequence adjustment, SATA adjustment, security, start-up options (which mode to start in) and basic time adjustment.  Unfortunately I have to become highly critical to this easy mode: if I had no idea what system I was dealing with and I moved into this BIOS, the only thing I now know about the system is that it is a GIGABYTE system.  There is nothing on the front page about the CPU, the Motherboard, the speed settings, the temperatures or the BIOS revision.  It is only because I have used GIGABYTE BIOSes before that I understand that pressing F2 will adjust to one of the other modes that will tell me this information.  This menu uses a discordant amount of blank space for not very detailed icons and is not particularly that helpful as a startup guide beyond boot sequencing. 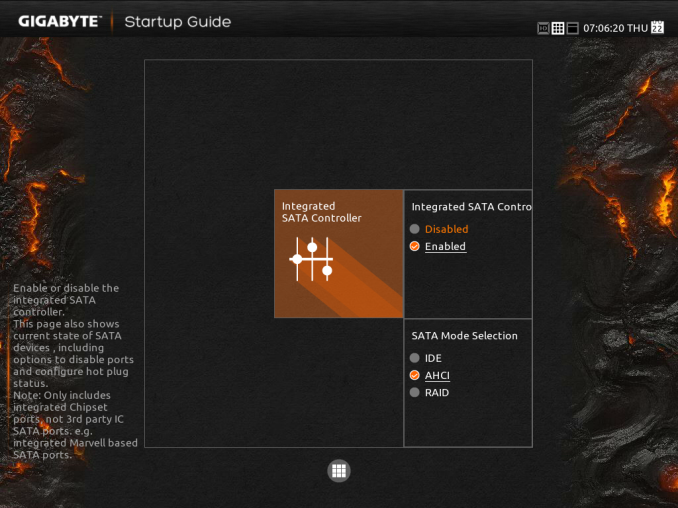 When a user clicks one of the icons the other options fade away and others take its place relating to the option chosen.  Here the Integrated SATA Controller offers two options, enabling (one would wonder why it would need to be disabled in a startup guide) and the other is SATA Mode selection.  Aside from the image above having text clipped, the information on the help description on the left does not correlate with the options on the right.  Aside from being slightly unreadable (grey text on grey/black background), there are no options for hot-plug status as mentioned, and the text says this option only covers chipset ports.  Chances that a new user might not know which ones are the chipset ports, however this is a graphical BIOS and the opportunity to put in a basic image to identify the relevant ports is missed. 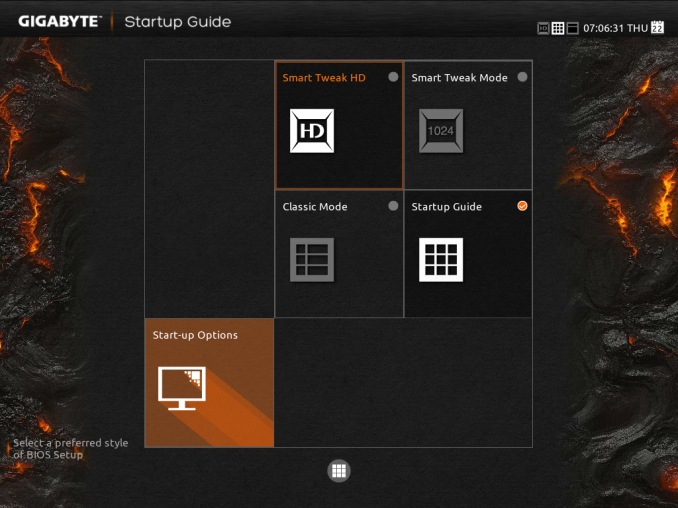 The Start-up Options tab gives the four modes which a user can set for future booting: the Startup Guide, Smart Tweak Mode/HD and Classic Mode.  Note that when a BIOS is flashed to a later version, this option has to be reset.  Unfortunately there is nothing GIGABYTE can do about this.  However, the Smart Tweak and Classic modes are those that we saw on Z87, the first being a full 1920x1080 HD platform that shows all the information we need: 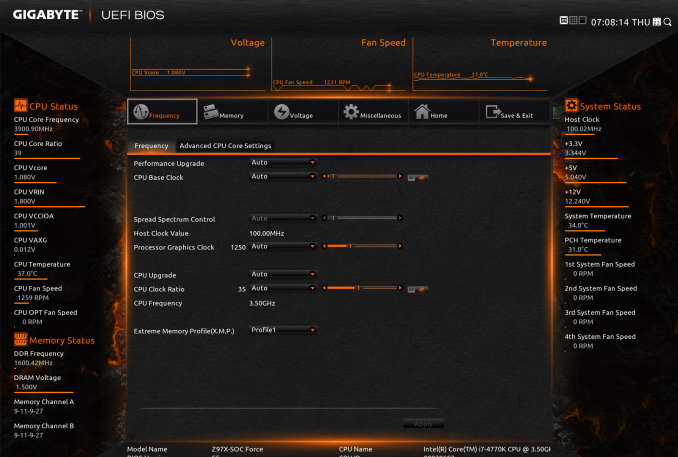 Unfortunately taking screenshots on my 1440p monitor with the BIOS cuts off some of the bottom (it screen captures to 1600x1080 for whatever reason), but it does show fully on a 1440p monitor.  The information at the bottom and around the sides is just what we need in a BIOS – model names, frequencies, CPU installed, memory installed, memory speeds, temperatures, voltages, fan speeds, the whole lot.  While I still have a mild dislike of the color scheme (I find it hard to focus on relevant data when quick glancing), the menus themselves are slightly rearranged better than on Z87. 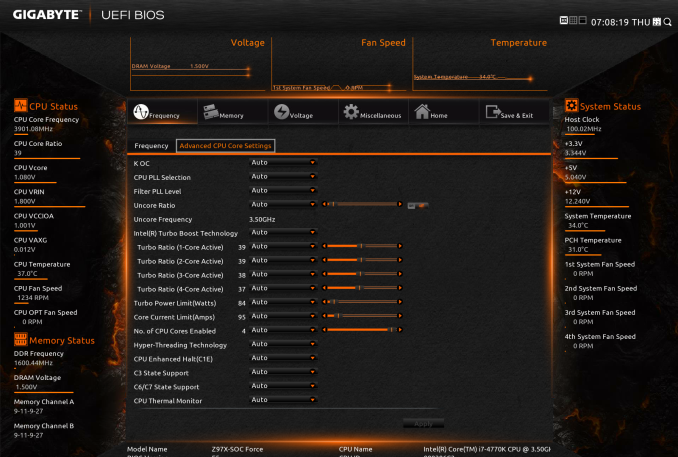 Similarly moving to the Memory main tab gives the advanced memory options, with a further tab for sub-timings and memory overclocking profiles, should a user have one of the super-unique kits that extreme overclockers like to play with: 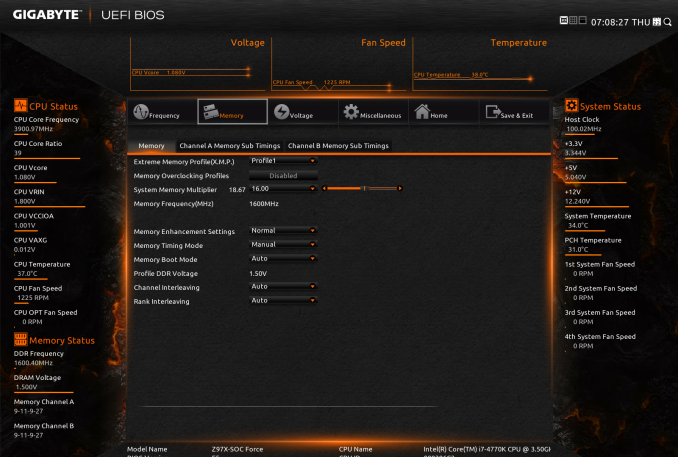 The third tab relates to the advanced voltage options.  Users of the Classic Mode in previous GIGABYTE BIOSes will notice that these three main tabs in Smart Mode mimic the main OC options from Classic Mode.  This is an important level of integration, allowing users that are more accustomed to the older design to get up to speed on the new design because the two are laid out the same. 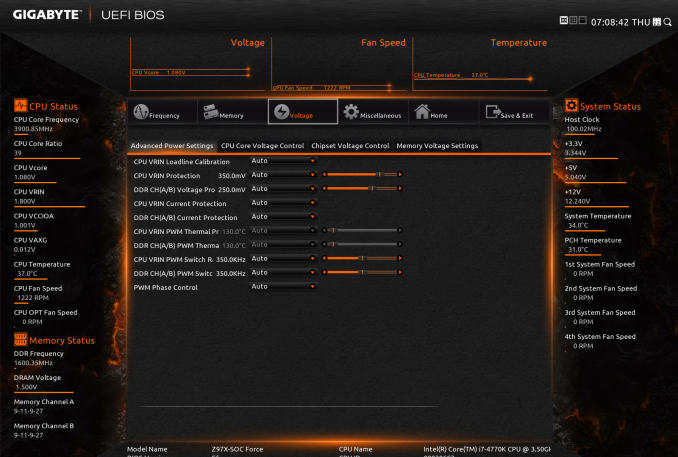 The voltage tabs are split into power settings (load line calibrations and thermal protections), CPU core voltages (VCore, VRIN, RING voltage, VCCSA), Chipset voltages and DRAM voltages.  One point to note is the text overflow issue in English shown above – some options are too many characters for the designated spaces to hold, and yet there is plenty of blank space to the side unused.

The Miscellaneous tab offers a couple of the more obscure settings as well as PC Health, including the fan controls.  For another generation GIGABYTE is giving BIOS fan controls as a function of PWM value/ºC.  This is an unexplained metric in the BIOS (making it harder to understand from a user experience perspective), but I will try here. 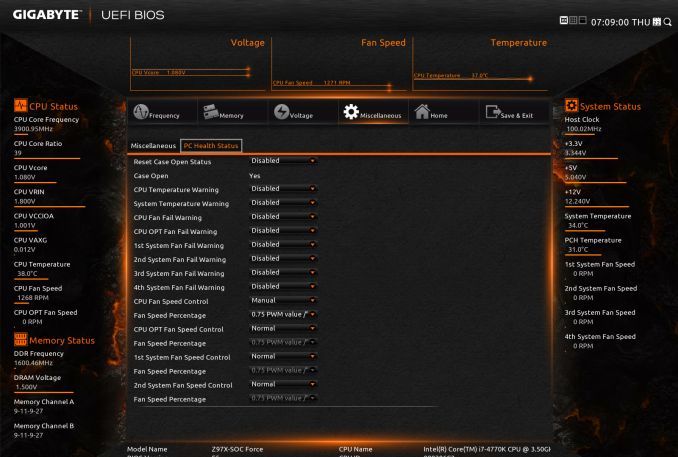 Each fan header on the motherboard can apply a power from 0 to 255 to a fan.  The fan will speed up according to the power profile of the fan (e.g. nothing until 10% power, then linear increase – this is determined by the fan design, not the motherboard).  The fan power is not a direct linear correlation relationship to the fan speed; however the gradient of the power increase can be controlled in the BIOS.  Thus a choice of 0.75 PWM value/ºC will increase the power of the fan by 0.75 units every degree Celsius that the CPU increases.

Given the leaps and bounds that other motherboard manufacturers have made on the fan front in the BIOS, as well as GIGABYTE’s own efforts on fan controls in the OS, I was hoping that the BIOS fan control would have been improved for Z97; however it is the same method as previous generations. 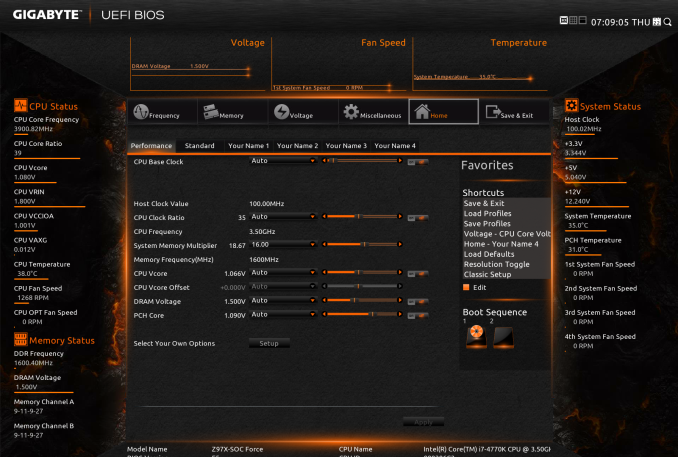 The Home screen is what GIGABYTE wants the HD BIOS to actually jump in to, which it did back with Z87.  Here we have a group of overclock options such as BCLK, Clock Ratio, DRAM Multiplier and voltages.  The next tab along the line is labeled ‘Standard’ and offers options such as display output and SATA options.  The ‘Your Name 1/2/3/4’ menus are the custom menus that allow users to pull options from other menus and place them into a custom menu.  This was also introduced with Z87; however I think the menus GIGABYTE offers here will cater for almost everyone. 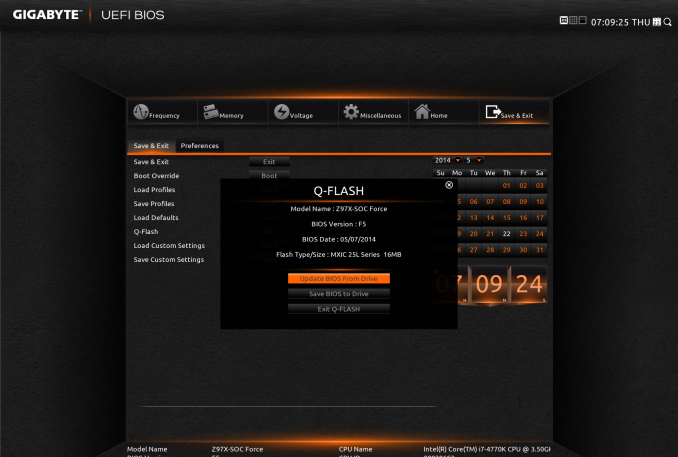 Updating the BIOS while in the BIOS uses GIGABYTE’s Q-Flash interface.  Attach a drive to the USB 2.0 port with the BIOS file in the root drive to ensure compatibility and ease of use.

The other mode in the BIOS is classic mode. 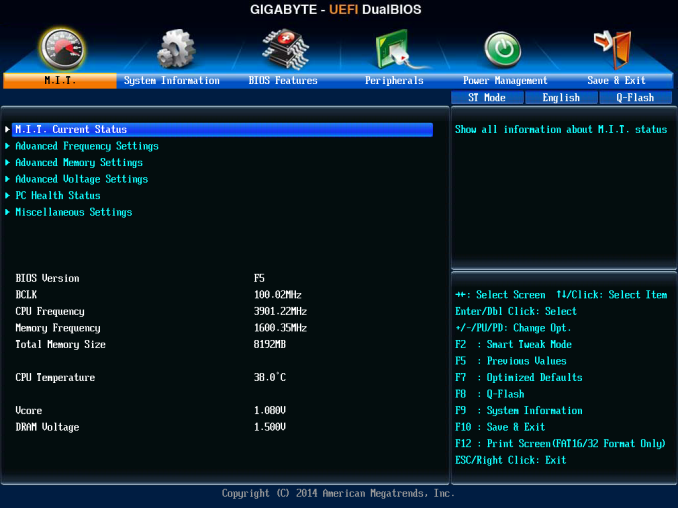 We have gone through Classic mode in many reviews before [1,2,3,4,5] so I will not dwell on it here, but Classic mode tends to be the go-to option for many enthusiast overclockers.  I feel this is because (a) it has been part of the GIGABYTE ecosystem for a number of years and they are used to it, and (b) due to the differing contrast it is a lot easier to read.  It also happens to have a lot of the peripheral options: 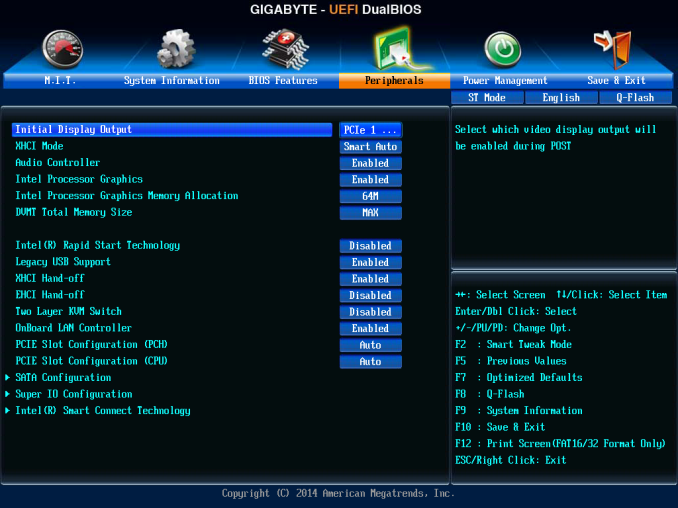 For a full visual outlook of the BIOS we tested, see the gallery below.

With the new graphical BIOS there are many different ways a motherboard company can adjust the BIOS to be more interactive, but sometimes the graphically simpler interfaces are the easiest to use.  There has to be the right leap from old to new for everyone to change.