On the back of a myriad of new motherboard launches based on AMD's X570 chipset, we have the MSI MEG X570S Ace Max. The new Max motherboard supersedes the previous X570 Ace, and fittingly has lots of new and improved features. Some of the biggest features of the new Ace Max include a large 18-phase power delivery with premium 90 A power stages and the inclusion of an Intel Wi-Fi 6E wireless interface. Other features include four PCIe 4.0 x4 M.2 slots, support for DDR4-5300 memory, and 2.5 Gigabit Ethernet.

Perhaps on par with MSI's flagship X570 model, the Godlike, the MSI MEG X570S Ace Max looks to take things to the next level with a stylish all-black design with contrasting gold stripes and multiple areas of integrated RGB lighting. Looking at PCIe support on the X570S Ace Max, it includes three full-length PCIe 4.0 slots that operate at x16 or x8/x8/+x4, with a single PCIe 4.0 x1 slot. The latter of which unfortunately shares bandwidth with the Wi-Fi 6E module, so when that is in use, the slot is disabled. 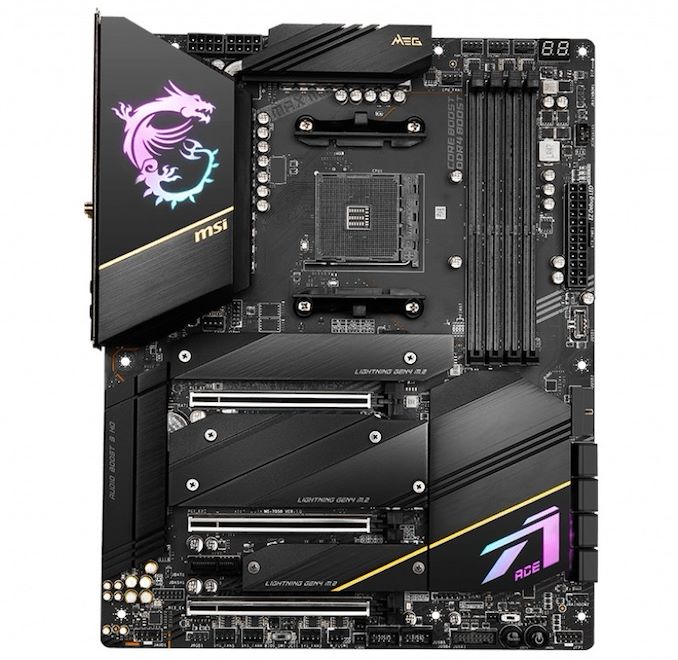 Looking at storage options, the MSI MEG X570S Ace Max has four PCIe 4.0 x4 M.2 slots, including three with support for SATA drives, as well as eight SATA ports with support for RAID 0, 1, and 10 arrays. MSI also includes an M.2 Xpander-Z Gen4 S M.2 PCIe 4.0 addon card for users looking to add more M.2 storage. Memory support is also impressive, with support for up to DDR4-5300 and a maximum supported capacity of up to 128 GB across four memory slots. Keeping the system cool is a combined total of eight 4-pin headers, including one designated to a CPU fan, one for a water pump, and six for chassis fans. MSI also has a premium power delivery, with an 18-phase design using 90 A power stages versus the 60 A power stages used on the original MEG X570 Ace.

At the time of writing, we don't have pricing information or when the MSI MEG X570S Ace Max will be available at retail, but we expect this to be within the coming months.