TSMC this week held its Arizona fab 'first tool-in' ceremony, where alongside celebrating its first US fab, the company also announced major expansion plans for the production facility. The world's largest foundry is set to invest tens of billions of dollars in the next phase of its Fab 21 near Phoenix, Arizona, to significantly expand its capacity and start production of chips on its N3 process technologies there by 2026.

Construction of TSMC's Fab 21 phase 1 in Arizona was completed earlier this year, and this week the company began installation of production tools into the facility. The fab will be equipped with tools from companies like ASML, Applied Materials, KLA, Lam Research, and Tokyo Electroni in the next few quarters, and it is scheduled to come online in early 2024. The fab will be producing chips using various process technologies that belong to TSMC's N5 family, which now includes N5, N5P, N4, N4P, and N4X nodes. Production capacity of this phase of the fab will be around 30,000 wafer starts per month (WSPM), though the precise number will depend on actual technologies and designs.

Companies like AMD, Apple, and NVIDIA are set to run orders through Fab 21 phase 1 to produce their advanced chips in the U.S. for the first time in years.

But that isn't all that TSMC has in store for Fab 21. The company has announced that they now intend to build a second fab on the site, further expanding their US production capacity and setting up an even newer production line.

The new Arizona fab will expand TSMC's capacity at the site to around 50,000 WSPM and will bring TSMC's total investments in the site to $40 billion. Notably, that's a $28B jump over the initial $12B investment TSMC made in their first Arizona fab, underscoring how costs continue to rise for newer fabs, but also that TSMC is becoming more comfortable with making larger infrastructure investments within the US. TSMC expects annual revenue from Arizona fabs to be in $10 billion per year ballpark, according to a Reuters report. Meanwhile, TSMC's clients using the fabs will generate about $40 billion in revenue selling products made by the foundry in the U.S. 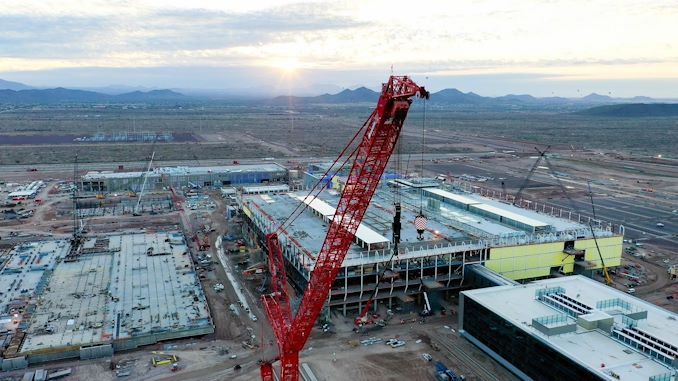 Set to come online in 2026, the second Arizona fab will be starting life a generation ahead of its initial counterpart, producing chips on TSMC's N3 family of production nodes, which includes N3, N3E, N3P, N3S, and N3X. TSMC is expected to deliver its first N3 chips to a client in early 2023, so while the fab still represents cutting-edge technology as of the time of its inception, by the time it comes online it will technically be a trailing-edge fab. TSMC has previously indicated that they would be keeping leading-edge production within Taiwan – in large part because that's where their actual R&D takes place – so the company's updated Arizona fab plans are consistent with that stance.

With regards to capacity, the new Arizona fab, like its existing sibling, will be another "MegaFab" in TSMC parlance. That is to say a mid-range fab producing around 25,000 wafer starts per month. TSMC hasn't disclosed a specific output figure for just the new fab, but with Fab 21 slated to offer 20,000 WSPM, it looks like this fab will be a bit bigger, at closer to 30,000 WSPM. Still, with a combined capacity of 50,000 wafers per month, TSMC's Arizona facility is still among one of TSMC's smaller operations – 50,000 wafers is only half the production capacity a single one of TSMC's class-leading GigaFabs. So even with a second fab line, TSMC's US operations will only represent a relatively small fraction of the company's overall chip fab capacity.

Looking forward, TSMC has already begun construction of the second Arizona fab, and given the usual fab construction timelines, we can expect the shell to be complete by early 2024. After which it will take TSMC around another two years to equip it.

Meanwhile, TSMC is set to start producing chips using its N2 node in Taiwan in the second half of 2025. That node will use will be TSMC's first node to use their nanosheet-based gate-all-around field-effect transistors (GAAFETs), and over time will gain backside power delivery. Still, since not all products need a leading-edge node, TSMC won't have any trouble lining up customers for their N3 US domestic capacity.

"A strong, geographically diverse, and resilient supply chain is essential to the global semiconductor industry," said Lisa Su, chief executive and chairman of AMD. "TSMC's investment and expansion in Arizona is extremely important and mission critical for both the semiconductor industry and our extended ecosystem of partners and customers. AMD expects to be a significant user of the TSMC Arizona fabs and we look forward to building our highest performance chips in the United States."