With the dawn of capacitive touch displays and the iPhone, iPad, iPod Touch, etc., some might think the day of the stylus is past. N-trig has been around since 1999 working on stylus hardware, and they disagree. Just what can you do with a stylus that you can't do with capacitive touch? We met with N-trig at CES 2013 to see what they were up to, but they weren’t quite ready for us to post anything at the time. Fast forward five months and not only can we talk about their new pen, but we actually have a test platform in the HTC Flyer to play with. We’ll get to the new DuoSense Pen2 in a moment, but let’s start with some quick background information on N-trig first.

N-trig has been doing pen inputs for laptops/tablets/PCs since 1999, originally starting with desktops but now moving into the premium tablet space. Examples of current high profile devices with N-trig hardware include the Sony VAIO Duo 11/13, ASUS Taichi, Fujitsu Q702, and we would expect to see additional options in the near future. Some of the key applications they ship with include OneNote, Sketchbook Express, and a variety of other applications (depending on the notebook/tablet OEM). Recently, N-trig has rolled out their new line of pens and controllers, the DuoSense Pen2 and the Gen 4 (G4) sensor/controller. We didn’t get a chance to fully test a solution with a G4 controller, unfortunately, but the Pen2 is backwards compatible with existing N-trig platforms so if you’re in need of a new stylus you can look into upgrading. 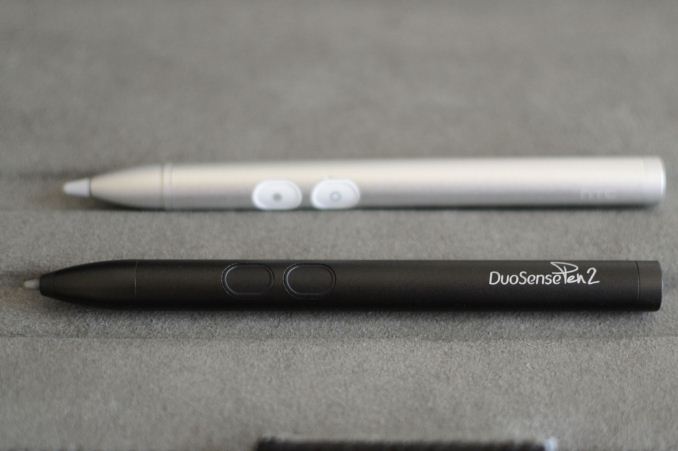 Many of the changes with the DuoSense Pen2 are quite subtle; at first glance you might not be able to tell the difference between the two models, but on closer inspection the refinements become apparent. The DuoSense Pen2 comes with a finer tip and it has modified internals with different bearings and tolerances (e.g. there’s less lateral movement and less axial movement). There are also two new tips for the Pen2 that provide different levels of friction to more closely emulate the experience of pen on paper (either ballpoint pen or roller-ball), and additional pen tips are in the works due for production this summer. The new pen features improved pressure sensing, it’s quieter, and when combined with the new G4 controller and you get improved speed and accuracy as well. The G4 platform also improves palm rejection and less pressure is required to start inking, again with the goal of mimicking the ballpoint pen experience. 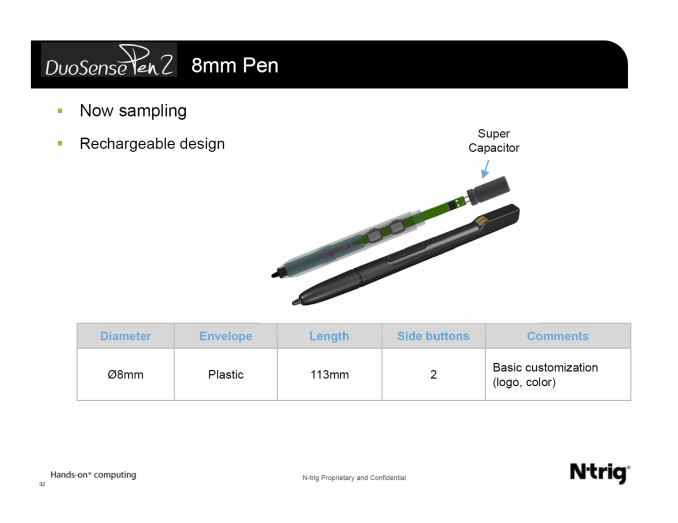 There’s also a new rechargeable pen available that uses a super capacitor to allow for rapid recharging. This allows for the creation of thinner, smaller pens that will work better with handhelds and tablets (5.5mm and 8mm diameter pens). The amount of power needed for the pen is extremely low (microwatts), so the super capacitor can get charged up in a matter of seconds and then continue to work for hours. We did get a chance to look at the new super capacitor pen at CES, but other than being thinner and lighter the feel of the tip is the same as the DuoSense Pen2. 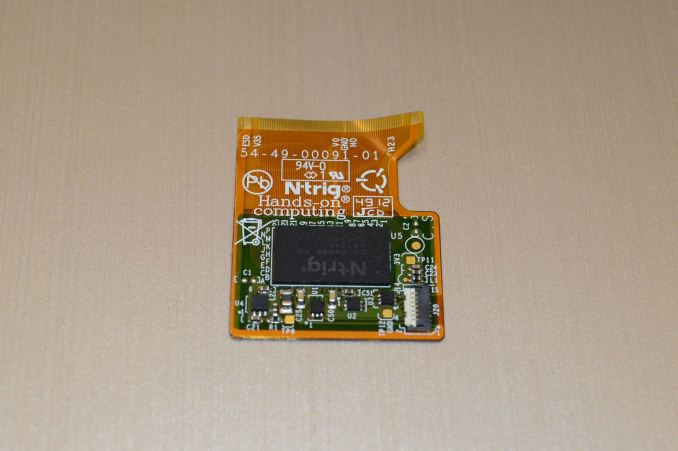 Moving on to the controller/sensor side of the platform, one of the big advantages of what N-trig offers compared to competing solutions is that they have a single chip solution that does both capacitive multi-touch and active digitizer on a single device. This doesn’t inherently lead to a better result for end users, but it reduces the component cost and footprint for the device manufacturers, and that’s often the deciding factor in what gets implemented. Using a single chip also reduces the amount of power used, another benefit for mobile devices.

The latest sensor handles both 10-point capacitive touch as well as the active stylus, with a single controller processing both inputs as well, and it works with display sizes ranging from 4.5” to 11”. If you want a larger display, you’ll need to add a second chip to get support for up to 15.6” displays. Perhaps more importantly, using a single chip opens the door for stylus support on smaller devices—so far, the HTC Flyer is as small as N-trig has gone in devices, but we will likely see smartphones with N-trig stylus support going forward.

Below is a gallery of slides from N-trig’s presentation on their technology, with some additional details and images of some of their pens and the internal hardware.