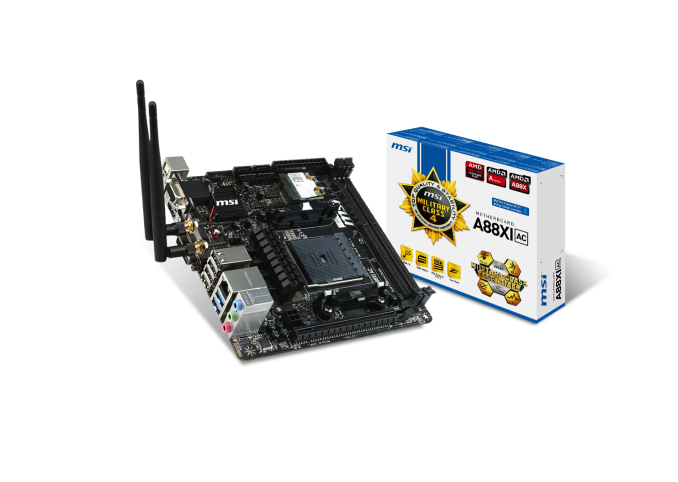 Everyone likes the small and the powerful.  If I could get the power of a GTX Titan or R9 290X in a smartphone, we should all want one (in fact, how powerful are they compared to GPUs of yesteryear?).  For mainstream PC systems, mini-ITX is currently the form factor defining small, despite some attempts from VIA.  We have recently reviewed some small motherboards on the Intel side that can pack a punch, but MSI think its AMD A88X motherboard can do the same with a Kaveri APU. 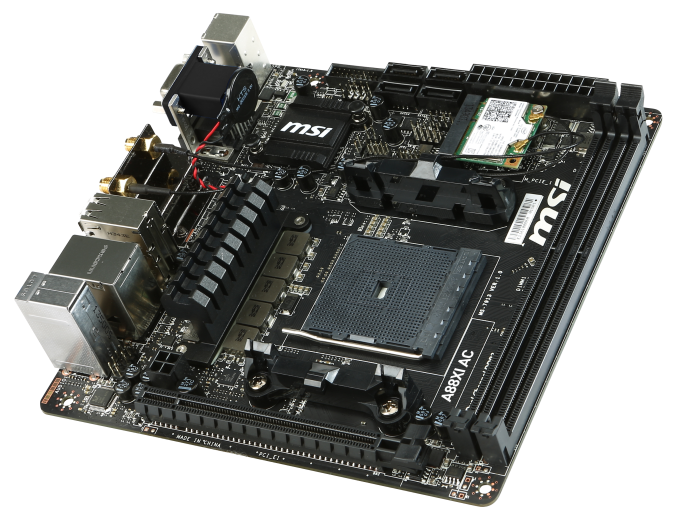 The A88XI AC measures the mini-ITX spec of 17cm x 17cm, with support up to 32 GB of DDR3 via two DIMM slots.  The size of the APU socket is often a hindrance to mini-ITX boards and requires a special small form factor cooler, and MSI’s is done similarly to fit on the mini-PCIe slot, SATA ports and USB 3.0 header.  The CPU power connector is in an awkward position, underneath the power delivery heatsink which means that cables will have to stretch over the motherboard.

The 802.11ac is a dual band 2T2R solution from Intel, the Wireless-AC 7260 card.  This is paired with a Realtek ALC887 audio codec and Realtek Ethernet controller.  The audio controller was presumably chosen as it only requires three audio jacks on the rear IO, and MSI has placed fixed antenna positions on that rear panel.  The rear panel also contains two USB 3.0 ports, a VGA port, a DVI-D port and a HDMI port.

We have only two fan headers on board, but MSI have included a TPM header for the industries that need it.  Memory support is listed as both XMP and AMP up to DDR3-2133 MHz, and the PCIe x16 slot is Gen 3.0.

An additional feature in the press release for the A88XI AC is MSI's USB Power, which enables a cleaner power supply for the USB ports.  This should aid USB DACs in minimising power related noise issues.

The MSI A88XI AC should be available at retail in Q1.